The latest senior public sector appointments from across the country

Jessica Mitchell, Craig Rosner-Moore, Hilary Johnson and Fiona Fraser have been promoted to assistant secretary positions at the Department of Agriculture, Water and the Environment.

Nicholas Shizas has been named as assistant commissioner-general counsel at the Australian Taxation Office.

Jacobus Lambalk has been appointed as executive director of business support and chief financial officer at the Fair Work Commission.

Jennifer Kaine has been promoted to commander marine workforce capability at the Department of Home Affairs.

Susan Pearce will be the new Secretary of NSW Health.

Pearce replaces Elizabeth Koff, who has spent more than 30 years at the department, which she led for the past six years and will leave in early March for a role at Telstra.

Pearce has been deputy secretary of NSW Health for the past six years. She has led the operational aspects of NSW Health’s COVID-19 response for the past two years, including its testing clinics and vaccination program.

She began her career as a registered nurse in Broken Hill and was previously the state’s chief nursing and midwifery officer and deputy secretary for patient experience and system performance.

Chris Field has been reappointed as WA ombud for a further five-year term.

Field is currently Australia’s longest-serving ombud and the only ombud in the 50-year history of the ombuds institution in Australia to be appointed to four terms of office.

Field will continue as president of the International Ombudsman Institute, having been the first Australian elected as president in the 43-year history of the institute.

Field’s office has new functions planned over his coming term, including as a national preventative mechanism under the optional protocol for cruelty and torture, as well as continuing to assist in the consideration of a range of proposed functions. The new and proposed functions would see the office grow to more than 100 staff.

Andrew Hudson will become acting chief of the Centre for Policy Development as CEO Travers McLeod steps down but stays at the think tank as a fellow.

McLeod said the three leaders would “drive CPD’s next phase of growth and impact”.

“Andrew, Annabel and Allison are outstanding leaders and I know they are committed to, and capable of, amplifying the approach that has made CPD a trusted partner across the Australian policy landscape,” he said.

“I love CPD and feel very fortunate to have been able to work with a brilliant team and network to generate change on some of the biggest policy challenges faced by Australia and the region.”

Hudson, previously CPD’s international director, has 25 years of experience in advocacy, campaigns and senior leadership. He’s worked with NGOs, the UN, the private sector and government.

“Andrew brings to the acting CEO role a wealth of global experience in collaborative leadership that is firmly in line with CPD’s values and method,” Mr Moran said.

Helen Bowskill has been appointed as Queensland’s new chief justice.

Bowskill was admitted as a barrister to the Supreme Court of Queensland in 1998.

She was later appointed Queen’s Counsel in 2013, appointed to District Court on 10 November 2014 and then appointed a judge of the Supreme Court of Queensland’s Trial Division in 2017. Bowskill was then appointed as the senior judge administrator in August 2021, 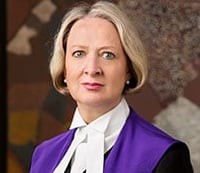 The Victorian government has appointed Meryl Sexton as the first deputy chief judge and Andrea Tsalamandris as Supreme Court judge.

The deputy chief judge role will assist the chief judge with an increasing workload of the County Court.

“Throughout Judge Sexton’s judicial career, she has contributed tirelessly to the administration of the County Court through a variety of roles, including as head of the sex offences list and as acting chief judge,” Kidd said.

Tsalamandris brings more than 20 years of legal experience to her new role, with the past six years serving as a judge in the County Court. She most recently was head of the common law division.

Queensland Treasury Corporation chair Gerard Bradley is stepping down after a decade in the role.

Queensland treasurer Cameron Dick praised Bardley for his contribution to the ongoing economic strength of the state, saying he had signed off and reviewed many of Queensland’s investment decisions.

“Gerard has given virtually all of his working life to building a better Queensland and we are most grateful for his contribution,” Dick said.

“He’s risen to be a giant of the state’s bureaucracy and business world and Gerard’s efforts for modern Queensland are unmatched.”

Bradley became an Officer of the Order of Australia in 2021  for distinguished service to public administration, economic policy, and the community.

“Gerard is renowned across the public sector for his intellect, his strategy and his gracious manner,” the treasurer said.

Bradley has given six months’ notice in the role.

The groups provide advice to the coordinator of energy on the evolution of the wholesale electricity market rules, gas services information rules and Pilbara networks rules.

Atkinson, a justice of the Supreme Court of Queensland for 20 years and former Queensland Indigenous Justice committee chair and chair of the Queensland Law Reform Commission, later lectured in Literature, drama, film and Australian studies at the Queensland University of Technology.

Herman Van Eyken is an internationally awarded film director, screenwriter, producer and is head of the Griffith Film School and Griffith University.

Dylan Miklashek has more than 25 years experience in the interactive games industry and is the managing director of Gameloft Australia.