Machinery of Government changes (MoGs) are occurring with increasing frequency at the federal government level. While some agencies are subject to MoGs more often than others, few are immune to having their functions or responsibilities subjected to mergers, demergers, or caught up in the creation of new agencies.

The federal government averages around ten MoGs per year, according to the Australian National Audit Office (ANAO). MoGs also occur frequently in state and territory governments.

The common expectation is that the impacted agencies will spend a short time planning and preparing, and then ‘just a weekend’ transferring the relevant systems and data from the old agency to the new, with a bit more time afterwards to iron out any issues.

In fact, this ‘transition period’ is usually many months, sometimes years (as evidenced in the Home Affairs case study). When the transition is difficult or prolonged, the data security risks created by a MoG are sometimes overlooked at the SES level. In an era of ever-increasing cyber-attacks, managing data security risk is an essential responsibility of any SES leadership team.

In this Whitepaper, you will discover: 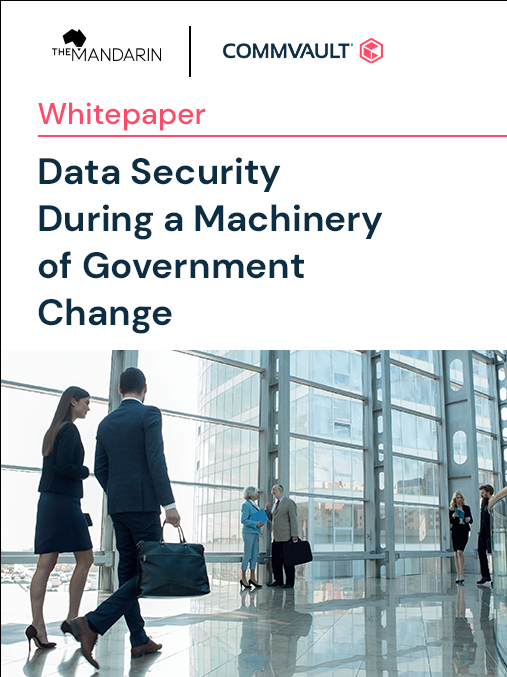 Commvault is a global leader in data management. Our Intelligent Data Services help your organization do amazing things with your data by transforming how you protect, store, and use it. We provide a simple and unified Data Management Platform that spans all your data –regardless of where it lives (on-premises, hybrid, or multi-cloud) or how it’s structured (legacy applications, databases, VMs, or containers). Commvault solutions are available through any combination of software subscriptions, integrated appliances, partner-managed or Software-as-a-Service via our Metallic portfolio. Throughout 25 years, more than 100,000 customers have relied on Commvault to keep their data secure, assessable, and ready to drive business growth. Learn more at www.Commvault.com.