Outsourcing public services is a tricky business — but there is no doubt a “business” it has become. Billions of dollars in social services are delivered by other parties, under contract, to governments across Australia, the costs and benefits of which, we are often unsure of.

When to outsource, to whom, and how to structure these relationships remains a fundamental challenge in public management practice. Where the limits to outsourcing actually are is not an economic decision alone, but has both political and moral dimensions. What can, and should, be done by government and who should get to make a buck in the complex market for public services?

The enormous range of public services that governments provide means there is no easy answer, but some we might care more about than others. Do we really care who collects our rubbish or delivers our mail? Some may, some may not. But what about who runs prisons, operates detention centres, or places the unemployed into jobs?

Can we stomach, politically and morally, profits being made from the misery of others and how do we create performance and accountability systems to guard against exploitation?

“Government is now out of the provider game, but as purchaser is now in the business of market design.”

The Jobs Game, aired on ABC TV’s Four Corners, takes us right to the centre of this debate. Four Corners lays out a series of claims of questionable behaviours by a small number of providers in Job Services Australia.

These providers, it argues, are exploiting the unemployed and returning big profits rather assisting jobseekers into work. Since 1998 when the privatised system came into play, almost $18 billion has been paid out to providers — both for-profit and non-profit organisations. The current scandal covers a range of practices and claims — some new, some old.

Some of the claims centre on providers who have allegedly falsified documents to gain government payments. Others are extracting large amounts of money in the system by setting up their own registered training organisations and filling them with jobseekers. Others simply park the most needy in the too hard basket. Big players are making big bucks, not just in Australia, but in similar businesses servicing governments around the world and returning hefty dividends to shareholders.

But where is government in this story? In a major report from 2013, Jobs Australia, a peak body for providers, lamented the current approach arguing it had a misalignment of incentives, was too complex, too focused on compliance, had become transactional, had minimal innovation, and, in sum, was under-performing. 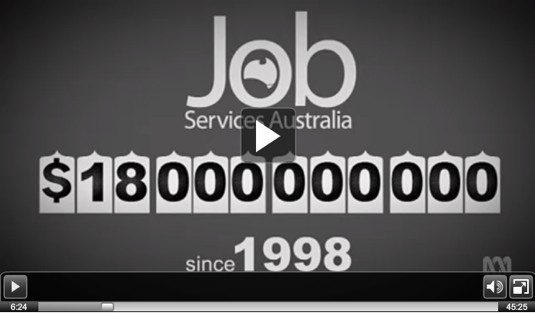 In its quest for compliance, such a rule-bound system, fixated on narrow performance metrics can create major distortions. Government is now out of the provider game, but as purchaser is now in the business of market design. It is here where the hard grind of outsourcing begins.

As the only purchaser in town for many of these services, they can largely set prices, rules, and performance monitoring regimes. And providers, both for-profits and non-profits, have incentives to “optimise” within these often tightly controlled service delivery regimes. But when does optimising within the rules become a rort? And when does gaming the systems to maximise returns become outright fraud?

“The more any quantitative social indicator is used for social decision-making, the more subject it will be to corruption pressures and the more apt if will be to distort and corrupt the social pressures it is intended to monitor.”

Drawing on the example of education where test scores are used to measure teacher and school performance, and often to distribute rewards, he has argued that teaching to the test is not illegal but it might very well distort educational outcomes. Honest cheating is all part of the game. But what about if teachers fill out test papers, correct wrong answers by students, or falsely certify them? Of course, this would be dishonest cheating; the breadth and depth of which was brought to light in the Alabama education system where teachers and education officials did just that.

The current scandal takes us back, once again, to the question of the role of the state — what should government do? Who should it work with? And how? Alongside this are big questions about our appetite for outsourcing. Not all providers game the system; not every provider will cheat. Some are actually in the business of working with the unemployed to get jobs.

But an obvious reaction from this case is for government to clamp down harder on all providers, further stifling their ability to deliver on the very social outcomes that government wants. Honest cheating, dishonest cheating, rorting, corruption and gaming: in the end, who really pays?

Outsourcing of public services is never always the answer, nor is it never the answer. Much of what government needs to do, it simply cannot do alone. But how to structure these relationships, how to ensure the appropriate expenditure of public funds, and how to guard against creating markets for misery, remains an enormous challenge.

This article was originally published at The Conversation

Janine O'Flynn is professor of public management at the University of Melbourne and an adjunct professor at the Australia and New Zealand School of Government.

[…] The big-money game of outsourced employment services The Jobs Game, aired on ABC TV's Four Corners, takes us right to the centre of this debate. Four Corners lays out a series of claims of questionable behaviours by a small number of providers in Job Services Australia. These providers, it argues, are … Read more on The Mandarin (press release) (subscription) […]