The incentives driving mental health policy are “wrong” and should shift towards prevention, recommends the report of the National Review of Mental Health Programmes and Services, chaired by Professor Alan Fels.

The report argues “the status quo provides a poor return on investment for taxpayers, creates high social and economic costs for the community, and inequitable and unacceptable results for people with lived experience, their families and support people.”

It also noted that there was a lack of outcomes evaluation on which to judge the efficacy of many policy interventions. “In particular, there was a lack of state and territory information at the programme and regional levels, and about non-government organisation performance. Of data that was available, most focused on activity, rather than the achievement of outcomes.”

The report was provided to government in November, but was not made public until after it was leaked to Crikey yesterday and subsequently released by health minister Sussan Ley.

Although the review found examples of inefficiency in implementation, the major issue appears to sit at the strategic level:

“The review found inefficiency due to issues such as lack of economies of scale, and multiple organisations needing to provide back-office support services. But by far the biggest inefficiencies in the system come from doing the wrong things — from providing acute and crisis response services when prevention and early intervention services would have reduced the need for those expensive services, maintained people in the community with their families and enabled more people to participate in employment and education.

” … At a system level, we found that the greatest source of waste is not inefficient operation of organisations or payment systems, but rather is in funding and doing the wrong things.”

Echoing the advice of health experts in other areas, the report highlights the potential long-term financial and health benefits of investing in a “person-centred”, integrated approach based on community and primary care, which would mean treating people before symptoms reach crisis point and avoiding expensive hospitalisations. Intervening early, and providing the right interventions, can save enormous costs throughout a person’s lifetime, the report claims:

“For example, for people with complex needs, such as a person with severe bipolar disorder, optimal care (based upon greater GP contact, increased support from community mental health teams and continued access to care coordination and psychosocial supports) can yield savings over nine years of $323,000, with about half of that saving being directly to the states through reduced acute care costs (admissions) (noting previous advice about Commonwealth financial contributions to acute care) and about one-third to the Commonwealth. Much of that saving occurs in years one to three, although health savings also occur in the later years as health status improves.

” … The Independent Hospital Pricing Authority found that in 2011–12 there were 108,235 hospital separations for mental diseases and disorders, with a total cost of $1.1 billion and average cost of $10,248. This is double the average cost of a general admission at $4812. The average $10,000 spent on one person’s hospitalisation of nine days could enable a community mental health service to provide support to a person for a full year.

” … Nationwide, resources are concentrated in expensive acute care services, and too little is directed towards supports that help to prevent and intervene early in mental illness. Of total Commonwealth spending of $9.6 billion, 87.5% is in demand-driven programmes, including income support, and funding for acute care. This means that the strongest expenditure growth is in programmes that can be indicators of system failure — those that support people when they are ill or impaired–rather than in areas which prevent illness and will reap the biggest returns economically and ‘future proof’ people’s ability to participate and live productive, contributing lives.”

And although the review states that “no real evidence that specific Commonwealth-funded services or programmes were not adding value or that they should be defunded due to lack of impact”, there is, however, “evidence that far too many people suffer worse mental and physical ill-health because of the treatment they receive, or are condemned to ongoing cycles of avoidable treatment and medications, including avoidable involuntary seclusion and restraint.” 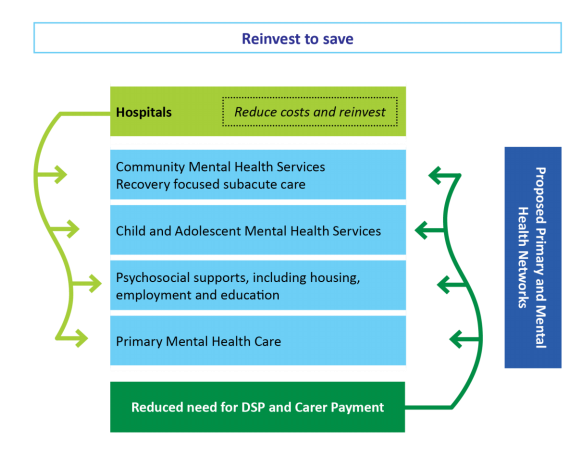 Fels recently wrote an essay on improving mental health for Who speaks for and protects the public interest in Australia?, published by the social policy think-tank Australia21 (chaired by former mandarin Paul Barratt). Fels argues:

“Every few years mental health rises as a priority, and then is displaced by other, seemingly more important issues. This must change, because there are few issues more vital to the long-term welfare and wellbeing of the Australian population than mental health.

“… As an economist, I probably seemed to many people an unusual choice for the inaugural chair of the National Mental Health Commission. However, during my time as chair, I’ve seen economic questions everywhere I’ve looked. What has become clear to me is the huge opportunity cost of inaction on mental health. Recent separate studies by the OECD and the International Labour Organisation put the costs of mental health problems at 4% of gross domestic product. This figure can be applied here, and it is massive.”

A 2014 report by PwC argued that “for every dollar spent on successfully implementing an appropriate action, there is on average $2.30 in benefits to be gained by the organisation.”

Former secretary of the Department of Prime Minister and Cabinet, John Menadue, also wrote for Australia21’s recent essay collection, arguing that Australia’s health policy has been poorly served for a long time due to capture by vested interests:

“Departments such as Health that are so influenced by special interests should have different governance arrangements. The traditional minister/departmental model in Health is a happy hunting ground for vested interests that significantly influence outcomes in health. The Reserve Bank, composed of independent and professional persons, has shown the benefit of such governance arrangements in keeping vested interests at bay and promoting an informed public debate. We need such an arrangement in the health field particularly.”