A touching tribute to the Anzac sacrifice of the Victorian public sector has been praised by Premier Daniel Andrews on the eve of the Anzac centenary.

The online memorial, collated by historian Robert Bollard for the Community and Public Sector Union’s Victorian branch has identified over 6000 public servants, teachers, police and railway employees who enlisted in World War I.

Andrews said their contribution deserves to be remembered:

“In honour of their sacrifice, and to commemorate their service, it is fitting that we, in this centenary year, recall as much of what occurred in that war as possible…

“This project has placed on the public record, once again, the names of the men and women who – having already served the state of Victoria in peacetime – served their nation in a time of great trial and suffering.”

Great to see the @CPSU_Vic’s Public Sector Employee’s in WW1 exhibition today. Check it out at http://t.co/NKl55smC0Opic.twitter.com/2u3ccQXmNL

Bollard also had access to the union’s journals from the era, providing an insight into way the public service commemorated the 286 of their own who died. In total more than 60,000 Australians gave their lives in the conflict.

The PS Journal in 1918 estimated 1899 employees of state departments enlisted and a further 4509 employees of the railways served.

The online memorial tells the stories of Victoria Cross awardees like L-Cpl Albert Jacka from the Forests Department, and Flight Commander F. H. McNamara who was a school teacher and principal in the Education Department. A few women have also been identified such as Margaret Brodie Waterstrom, an Education Department nurse who was eventually awarded an OBE and the Red Cross 1st class after serving in India and Persia. 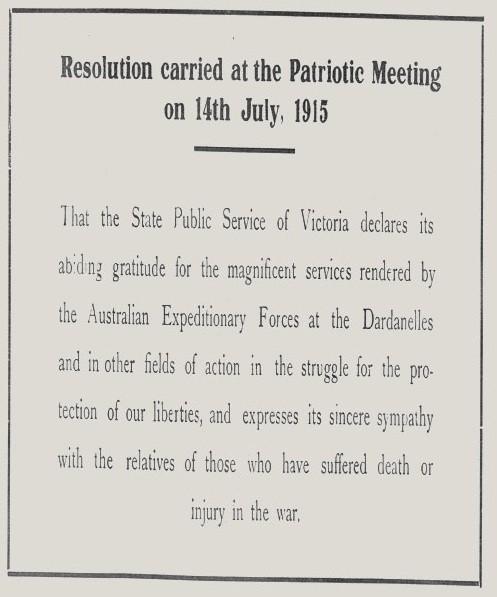 “…no body of men in any walk of life, who have been more ready to do their duty, than the Victorian State Servants of the Crown” VPSA Journal – 21st December 1918