Following Black Saturday, the Victorian government has become more experienced and prepared in its emergency social media responses. Darren Whitelaw, Assistant Director, Strategic Communication and Protocol Branch at the Department of Premier and Cabinet, recently spoke to the Connected Government Summit in Melbourne about his experience running the social media response to the Morwell mine fire in 2014.

Whitelaw explained how, on Black Saturday, he wanted to set up “what we now refer to as a strike force, a social media command centre”, but was initially told “we don’t have any room for that here, all the seats are allocated to traditional roles.” Instead, he set up a team in the building next door to start responding to non-emergency messages and distributing reliable information on social media.

“Nowadays that’s pretty stock-standard of how we deal with emergencies and get messages out,” he said.

“The official messages online were patchy, and we started to get social media commentators sticking the boot in.”

Then came the Morwell fire at the Hazelwood coal mine, around two hours from Melbourne, in February 2014. It went on to burn for 45 days, filling the air with black smoke and raising health concerns among its distressed residents.

Yet for the first few days “there were lots of people working really hard and it wasn’t getting a lot of attraction or attention outside the region. Where we sit, just off Spring street, the kinds of messages the locals were feeling weren’t really getting through”, Whitelaw told the conference.

Meanwhile, “misinformation was being spread like wildfire, people saying ‘this is all cancer-causing’. Social media was buzzing with a whole lot of stuff that actually wasn’t quite right. The official messages online were patchy, and we started to get social media commentators sticking the boot in.”

Whitelaw explained how he saw a “crisitunity”, and around two weeks after the fire began, a response began to assemble. “The plan was developed on a Friday and then three days later on the Monday it was fully kicked in.”

The team began by “documenting some objectives and measures of success. We were there to communicate messages, to magnify the reach, to quickly correct misinformation, and to minimise reputational damage. There were KPIs that were set.”

This, said Whitelaw, was about “giving the team really clear reasons about why we are coming in here to do stuff, rather than just being able to coordinate in our activity.” 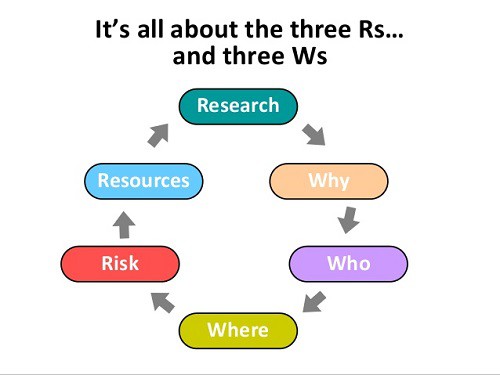 The next step involved defining their audience. “Often in government we say, ‘our audience is all Victorians aged over 18’, but that’s not right, because if you talk to everyone, you talk to no one,” he argued. They used a free tool called Experian Mosaic, which uses ABS data to plot people in geographic, demographic, and profile information, down to postcode level.

Whitelaw found that “most of the early days followers [on social media], the people who were most helping amplify our reach and messages, were actually journalists”, and that nine out of ten conversations were happening on either Facebook or Twitter.

“Just bloody do it … we can no longer afford to keep moving at the speed of government.”

There are plenty of reasons to be cautious, within reason. “It wouldn’t be government if we didn’t think about risk. The key to this is being risk aware, not risk averse. Often in government we go ‘we couldn’t possibly do this for whatever reason’. There’s a whole lot of myths. There’s real risk too. But that doesn’t mean we shouldn’t be doing stuff. There are people whose lives and health are potentially in danger. I was arguing that there’s bigger risks out there if they’re not getting information the right way,” he argued.

Part of this involved using the #mythbuster hashtag, “which started off in Queensland and forms part of crisis communication now” to correct facts.

One risk area was coordination. It’s important to ensure clear, consistent messaging — you don’t want different staff, who might be on different shifts, doubling up on jobs or giving inconsistent information.

The team adopted the US Navy’s approach to social media management workflow, which ties information management back to outcomes and provides a clear framework for action. Whitelaw developed the TOAST acronym to outline his approach:

“Part of that was, in peace time, if they publish something wrong on that information and someone takes that health information and gets it wrong, then potentially people die. So they have this double, triple checking process, but when you’re in a crisis you need to be able to move a lot faster.” 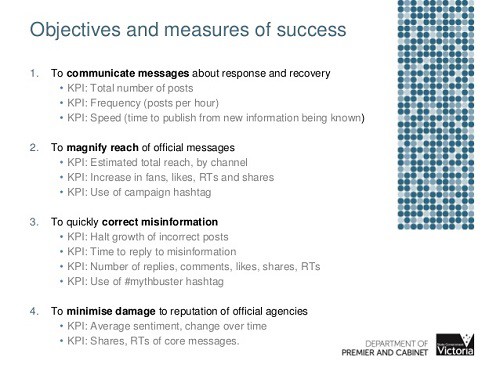 The unit used Hootsuite to track mentions of the mine fire in real time on social media, allowing faster responses, and a tool called Fetchrover to send email or SMS notifications of social media mentions out of hours.

Don’t be afraid to ask others for help, he added.

“Virtual operations support teams or VOSTS — community volunteers who come together online in a crisis who want to help out. The first time they stuck their hand up, government said, ‘volunteers? We don’t need you’. Hang on — we’ve got 70,000 volunteers putting out fires and helping stop people drowning and helping sandbag in floods. Why can’t we leverage volunteers online?

” … In the mine fire, they basically catalogued and clicked and archived every social media post, and that was used by the royal commission afterwards. You need to tap in and not be afraid when volunteer groups, who are now getting really well organised, try to help.”

Whitelaw also highlighted that it’s important to be prepared. He recommends using a social media simulator to practice your response. And don’t forget to make sure the passwords are accessible somewhere. “Murphy’s Law says it’s the guy with access to the account who is on leave in a crisis, and you need to log in to your twitter account to start sending messages.”

The final point, he said, “is JBDI — just bloody do it. As long as you don’t kill anyone, as long as you’ve got the support of your boss, we can no longer afford to keep moving at the speed of government. Especially when lives are at risk. It’s a notion of thinking big, starting small, and failing fast and cheap. That’s what we need to do better.

“Have a plan. Practice your plan. Rehearse it the same way you rehearse your normal crisis plans. Turn your crisis into an opportunity and learn from it, and then share it.”

Access to the Connected Government Summit was provided by Association and Communications Events.

Read more at The Mandarin: The right tool for the job: social media in the public service

Social media in government: 27 April to 4 May | The Brussels chronicle

[…] While not exactly a tool or a report, this is recommended reading for any Government looking at a potential crisis (so any Government, okay?) This short article provides the Australian state of Victoria’s social media response plan. The plan includes objectives and key performance indicators based on the United States Navy’s approach to social media, which links all communication back to outcomes and “provides a clear framework for action.” The framework is abbreviated as TOAST: […]