Cutting public services often leads to false economies, costing more in the long-term and undermining the basis of a successful capitalist system, argue the authors of a new book. 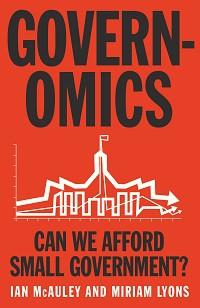 As the federal government prepares to release a budget that will bring cuts in many areas, Lyons told The Mandarin the centre of international thinking, in institutions such as the International Monetary Fund, was moving towards the contention that simply cutting services was often counterproductive.

There is plenty of evidence, argues Lyons, that “where governments are trying to get their budgets under control, they should tax the rich more, not spend less on the poor.”

She’s not buying the argument that we can’t afford properly funded services. “It’s quite clear when you look at the data that Australia has a revenue problem, not a spending problem,” she thinks.

“It’s very easy to point to the giant holes that our tax dollars are leaking through: you see things like superannuation tax concessions and tax shifting by large multinationals like Google and BHP. Just the other week there was the story about the 55 millionaires who pay no tax.”

Part of the problem, Lyons and McAuley argue in the book, is that when it comes to the size of government, “perception is the mirror-image of reality”. Australia is the lowest-spending of the 18 developed OECD countries, and the fourth-lowest taxing.

Despite this, two-thirds of Australians believe they live in a high-tax country, “while only 2% correctly realise that Australia’s taxes are among the lowest of all ‘developed’ countries”, argues Governomics.

” … public debates in Australia all of the ethical arguments lining up on one side of the debate and all of the economic arguments on the other.”

If Australians’ taxes were around the OECD average, at 34.4% of GDP, “people would be paying about an extra $9000 a household, raising an extra $95 billion a year — plenty to finance comprehensive school reform, to fill gaps in health services, and, over a few years, to provide the nation with an up-to-date network of broadband, roads, railroads and metro systems for the big cities”, Lyons and McAuley argue in the book.

Although Lyons acknowledges “overall we get very good value from our public spending”, she says “some of the trends are really worrying”.

“In education the results of a child who goes through school in Australia is becoming much more closely linked to their parents’ income than in other countries that have more equitable school systems.

“Another worrying trend would be the influence of the private health insurance rebate in pushing us more towards that two tier-style system you see in the US, where you have one quite expensive public system to mop up the worst health problems of poor people, normally intervening much later and much more expensively than could have been the case if there were universal health insurance.”

Following debates such as that around the proposed GP co-payment, Lyons thinks people are becoming more aware of “the potential for false economies when government cut backs get so extreme”.

The book aims to demonstrate the costs of under-funding public services that often escape official measurements.

“One of the main reasons for writing the book for us is that so often you see in public debates in Australia all of the ethical arguments lining up on one side of the debate and all of the economic arguments on the other,” thinks Lyons.

“We wanted to point actually there’s a hell of a lot of good economic evidence to back up principles many people would recognise as being in the broader public interest.

“There are a lot of good economic bases behind having a good public health system, having an education system where the quality of the kids’ education doesn’t depend on their parents’ income, lowering the gap between rich and poor, having some environmental regulation.”

Lyons worries ideological commitment to the idea of small government could lead to losing some of the good things markets can bring, citing Bank of England governor Mark Carney’s warning last year:

“Just as any revolution eats its children, unchecked market fundamentalism can devour the social capital essential for the long-term dynamism of capitalism itself.”

“Just as any revolution eats its children, unchecked market fundamentalism can devour the social capital essential for the long-term dynamism of capitalism itself. To counteract this tendency, individuals and their firms must have a sense of their responsibilities for the broader system,” said Carney.

Although the quest for smaller government is usually framed in evidence-based terms, Lyons and McAuley list several examples where ideology has seemingly pushed politicians to pursue marketisation in circumstances in which markets are known to perform poorly.

This commitment often ends in governments spending more than they would have to deliver services with a traditional public model.

“One classic example we point to is that Sydney’s roads would have cost $6 billion less if the government hadn’t been so obsessed with trying to pursue public-private partnerships in NSW and had just gone ahead and funded the roads through public debt,” said Lyons.

“Government can borrow at a cheaper rate, you don’t have to pay all the ticket clippers from the finance sector on the way through.

“I would also consider last year’s budget a very ideological one. It certainly wasn’t a popular one. It wasn’t driven by what the focus groups were saying, so it must have been driven by ideology, mustn’t it?”

Governomics: Can We Afford Small Government? is published by Melbourne University Press. RRP $32.99.

David Donaldson is a journalist at The Mandarin based in Melbourne.

[…] The book has garnered media attention from the likes of The Canberra Times, The Age and The Diplomat. […]