Victorian Special Minister of State Gavin Jennings has denied his government is backing down on reforms to strengthen the state’s anti-corruption commission, following a report last week in which he appeared to suggest a weakening of the government’s position.

Jennings has told the Mandarin the government will “fully honour” its commitments on integrity system reforms and the threshold for investigating corruption conduct will be lowered.

The confirmation comes after The Age reported earlier this week that “Mr Jennings said an aggressive NSW-style ICAC — which has wide powers to investigate public officials, even on a suspicion of wrong-doing — may not be suited to Victoria” as Victoria was not “contaminated” by the same level of corruption as NSW.

Jennings told the newspaper, “If we instantly replicate them [the NSW integrity rules] in Victoria it may expose some degrees of corrupt practice … but I don’t think it is going to unleash an avalanche of disclosures.”

But Jennings, whose portfolio includes public service reform, says the government will stick by its promises. In a statement to The Mandarin, Jennings said:

“We will fully honour our commitment to reform the state’s integrity system to lower the threshold for investigating corrupt conduct, including misconduct in public office and resolving jurisdictional issues between our integrity bodies.

“These reforms will give IBAC the powers it needs to expose and prevent corrupt conduct and misconduct in the Victorian public sector.

“This will deliver Victoria a coherent integrity and accountability system.”

Before the election Labor promised to fix what it called former premier Denis Napthine’s “toothless tiger” by removing the requirement for IBAC to find evidence of an indictable offence before it can investigate and giving it jurisdiction over the offence of misconduct in public office.

Jennings is currently reviewing the state’s integrity system with an eye to resolving some of the jurisdictional issues between the three integrity bodies — the Independent Broad-based Anti-Corruption Commission, the Ombudsman and the Auditor-General — each of which currently exists under its own piece of legislation.

The review is expected to be completed later this year.

But while the integrity system is up for change, political party donations reform is not a high priority for the Victorian government, which did not make any promises on the issue before the election.

It is, however, open to discussions on coordinated national reform on donations, as was recommended by the 2014 experts’ report into political donations chaired by Kerry Schott.

Last week former Victorian auditor-general Des Pearson told The Mandarin he thought the idea that Victoria did not need a stronger anti-corruption body was “problematic”:

“If you don’t look you’re not going to find anything,” he said.

IBAC has been in the headlines for its recent inquiry into corruption in the education sector, particularly so-called “bankers schools”, with several former Department of Education and Training officials already resigning.

Operation Ord is being presided over by commissioner Stephen O’Bryan QC, with Ian Hill QC as counsel assisting.

Hill opened the inquiry by revealing departmental funds had been used to pay for banker schools invoices for wine, lunches, conferences at expensive resorts and overseas travel, as well as personal expenses of departmental officers themselves:

“There is also evidence that the level of honesty and integrity of the senior departmental offices involved in the conduct referred to above, is considerable less than would be expected of public servants in the senior positions they hold.”

The inquiry is also looking at the original and operation of the practice of establishing “bankers schools” and whether the organisational culture and practices in the department have fostered the conduct or hindered opportunities to attempts to detect and eliminate the conduct. 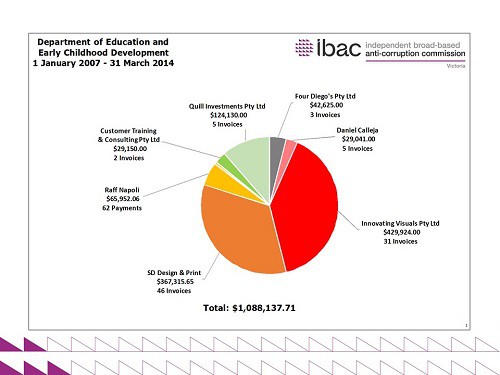 Read more at The Mandarin: Kerry Schott: the inside story of ICAC, lobbying and Australian Water Holdings