While some advocate emulating Asian education systems’ focus on rote learning to make up for Australia’s deficit in science, technology, engineering and mathematics skills, known collectively as STEM, a report shows that Asian countries are moving away from such approaches.

This comes as the states and Commonwealth argue over whether mathematics should be made compulsory for all students until year 12, with federal Education Minister Christopher Pyne pushing the mandatory case and the Labor governments of Victoria, Queensland and South Australia resisting.

Professor Zhao warns that making education more rigid will not teach students the skills they need for the future:

“Educational leaders in Shanghai, Hong Kong, Korea and Singapore understand that to thrive in a globalised, technologically sophisticated economy, students need much more than what can be measured with test scores in a few academic subjects,” he said.

“While they are proud of their achievements, there is widespread rejection of traditional education policies and practices such as rote learning, narrow and standardised curricula, long hours and harsh testing regimes.

“What I have found is that these systems are prioritising twenty-first century skills such as creativity, communication, collaboration and higher order thinking, as well as emphasising student social-emotional and physical health.

“They know they need highly-skilled, independent and emotionally intelligent young people who are well-prepared for the future.”

Problems behind the high scores

As the report points out, East Asia has some of the world’s highest-performing education systems when it comes to international testing. They’re often seen to be “high performance, high equity, high efficiency and rapid improvement”, according to Lessons that matter: What should we learn from Asia’s school systems?

The most recent Programme for International Student Achievement (PISA) report showed that seven of the top 10 scorers in mathematics were East Asian countries, as were six of the top 10 in science.

Australia placed 19th in maths and 13th in science, which, as the report notes, was better than the United States and United Kingdom.

Inevitably, this has led other countries to consider how to mimic Asia’s success, and much has been written about the lessons to be learned from these education systems.

But Asia itself is not standing still:

“Reform efforts have been directed at abandoning education practices and policies that many outside observers have praised. For example, national and focused curricula, high-stakes testing, carefully controlled gateways, meritocracy, direct instruction, long school hours, and hard work have been identified as factors contributing to Asia’s education success, yet they have been the targets of reform.”

Despite East Asian students’ world-beating scores in science and mathematics, surveys have found students in these places exhibit comparatively low confidence in their abilities. For example, in the 2011 Trends in International Mathematics and Science Study, eighth graders in Hong Kong scored extremely well in maths but only 19% said they liked maths, 26% said they valued the subject, and only 7% reported confidence. 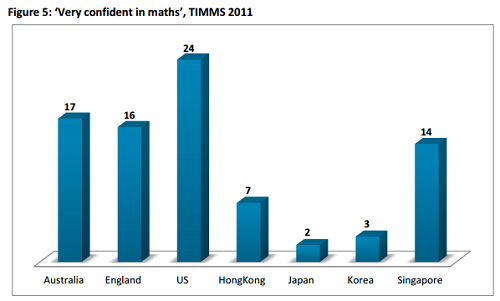 Confidence and enjoyment of maths and science subjects has a knock-on effect when it comes to pursuing those interests as a career, with Australia scoring highly for the number of students interested in following maths into the workplace.

These results echo the claims of Victoria’s Education Minister James Merlino, who argues that instead of making final year maths compulsory, it is more important to “build up the maths and science teaching capability in our schools, and make sure we engage students by making these subjects relevant and interesting.” 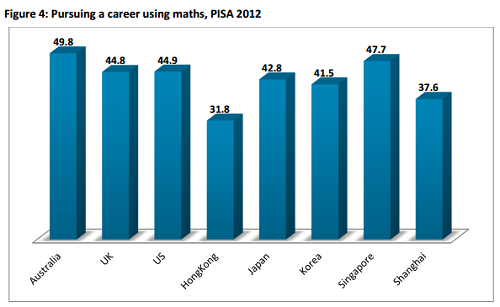 The report adds that while international testing is one metric of success, it does not capture the full picture:

“The discontent goes beyond a lack of confidence and interest. Unless the outcome of education is test scores on international assessments, these East Asian systems can hardly be called high-quality education systems. Those inside these systems pointed at such indicators as the relative shortage of creative and entrepreneurial talents, high levels of student depression and anxiety, declining physical health, and excessive academic burden.”

The number of students ‘escaping’ their own education systems for western countries shows the costs of East Asian systems, Zhao argues: “Who in their right mind would forgo the best education in the world, at tremendous financial and personal costs?”

And while Asian education systems are generally seen as obtaining high value for the amount of public spending versus results, the report points out that the amount spent by families on education is almost equal to the public investment per student, and that after-school tutoring is near-universal, in some places.

The claim to high equity is undermined by this same problem — the educational arms race has led to substantial “shadow education”, where the more well-off can pay far more for quality.

Moreover, government investment in some places is highly unequal. Across Shanghai’s 18 jurisdictions, government spending per pupil ranged from $159 to $1798, according to 2005 figures. Indeed, although PISA results for comparatively rich Shanghai are often reported as representing China, they do not even count the results from children of migrant workers living in the city, much less the rest of the country.

The report argues that high scores in international comparative assessments “is much less due to recent reforms than cultural legacy … with the Confucian culture that values passing exams as a primary means of achieving social mobility or meritocracy.”

Giving weight to this argument, a 2014 study found that Chinese-origin students attending schools in New Zealand and Australia had similar achievement to students in Shanghai in the 2009 PISA, and much higher performance than non-Chinese students in Australia and New Zealand.

Faced with poor student wellbeing outcomes and systems “not sufficient for the new world”, Asian countries are reforming their approaches to enable students to compete in a globalised world.

In Korea for example, the reforms were designed to produce citizens who are, according to the OECD:

The Mitchell Institute report characterises the changes in direction across East Asia as being driven by the goals of:

Zhao says that western countries are trying to move towards a focus on standardised testing, narrowing educational outcomes and restricting student choice at the same time that Asian systems are rejecting these ideas, warning that “even if current efforts undertaken in Western education systems succeed, the outcome will be an obsolete version of Asian education.”

To assist in “inventing the future, not fixing the past”, the report recommends Australian education policy-makers consider the following maxims:

[…] Don't force it: elusive solutions to Australia's STEM problem &#8230. High-quality education systems. Those inside these systems pointed at such indicators as the relative shortage of creative and entrepreneurial talents, high levels of student depression and anxiety, declining physical health. Excessive academic … Read more on The Mandarin (registration) […]