Federal work health and safety watchdog Comcare and the Department of Immigration and Border Protection have answered critics and asserted they are making a genuine effort to maintain workplace safety in immigration detention centres for all employees, contractors, visitors and detainees.

This comes as a senate select committee is due to report by the end of July on the responsibilities of the Commonwealth government in connection with the management and operation of the Regional Processing Centre in Nauru.

Lawyers opposed to current government policy have ramped up pressure on DIBP, and recently targeted Comcare’s role as a watchdog. Yesterday, the Australian Lawyers Alliance obtained and released a Freedom of Information document regarding 449 dangerous incidents in detention centres during 2013-14, angering the health and safety agency.

ALA spokesperson Greg Barns says Comcare has failed in its duty and did not investigate all the incidents, which included deaths, electric shocks, assaults, alleged sexual assault, self-harm, and mental health hospitalisations in detention centres and “the attempted suicide by young people”.

“There are major workplaces in Australia that are proud of the fact that they only have one or two workplace incidents a year — yet our detention centres have clocked up nearly 450. … If this was a mine or a factory in Australia, there would be politicians and workplace inspectors quite rightly asking questions and laying charges,” said Barns.

Barns also says Comcare should have gone further than regulatory inspections and investigated “the psychological conditions of immigration detention centres”.

Comcare CEO Jennifer Taylor calls the ALA’s claims “disappointing and incorrect” and said in a statement:

“I am appalled that the ALA has taken this information and deliberately used it in this way. The material released under FoI clearly shows that Comcare and DIBP have met their responsibilities.

“In all of the incidents that were notifiable under the Commonwealth Work Health and Safety Act, we took action where we considered it had to be taken. Comcare has appropriately discharged its regulatory functions and considered the employer is meeting its obligations under the Act.

“It is irresponsible to completely disregard the evidence that’s been presented through the FOI release and, in my view, twist it to suit a particular agenda.”

The agency decided 98 of the 449 incidents were “notifiable” under the act and says “more than 20%” warranted on-site inspections. No breaches of the WHS Act were identified by the safety regulator but it did make some recommendations to DIBP to improve their work health and safety practices, and says the department has acted on these.

Comcare says some incidents of self-harm “may not satisfy the definition of a notifiable incident” under the act. Taylor added:

“Comcare will, of course, continue to monitor and respond to any further notifications — as we do in every workplace where we have jurisdiction.

“Our approach to WHS regulation focuses on prevention — encouraging compliance through assistance and education, balanced with proactive and reactive inspections and audits. This also has to be balanced with appropriate enforcement and we will always take action against employers and workers who don’t get the work health and safety message.”

DIBP secretary Michael Pezzullo recently tackled the provocative suggestion that boat people are locked up punitively to deter other asylum seekers from taking the same route, in his opening remarks to the Senate inquiry sparked by the Moss Review:

“There is no explicit or implied strategy of brutalisation, which is designed to break the will of asylum seekers, and serve as a deterrent to others. This is a fictional narrative which serves the purposes of those who are opposed to regional processing, which is the policy of the government of the day.”

The year of living dangerously

The department’s annual report says 374 of the 449 cases “did not directly involve workers” and that it probably over-reported in 2013-14 due to:

“… a continued focus on improving the quality of guidance materials, training and support to help staff make decisions in accordance with the legislative requirements and to ensure all notifiable incidents are reported immediately.” 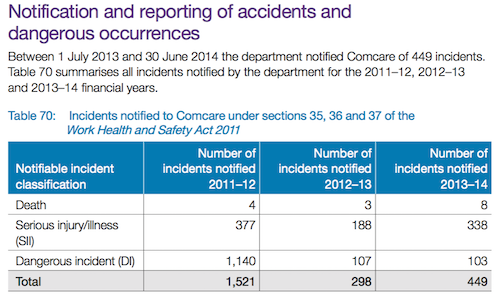 DIBP has established a “child protection panel” and the secretary has also said he is improving oversight of the facilities by keeping that function in the department, while onshore detention operations will be managed by Australian Border Force.

As for the regional processing centres on Nauru and Manus Island, in May Pezzullo told Senate Estimates his department does not “exercise effective legal control” over them but that “appropriate Australian accountability” is a feature of the agreements between Australia and the host countries.

The details of incidents in 2013-14 leads Barns to describe detention centres generally as “extremely dangerous places to be whether you are a detainee or an employee”.

There were nine detainee deaths including one suicide, but also one person with a brain tumour, and a three-year-old baby who had trouble breathing in Darwin. Detainees were hospitalised 186 times. There were 10 reported assaults, 16 cases of detainees being found unresponsive or unconscious, 25 reports of collapsing or fainting and 21 seizures, one of which was attributed to psychiatric injury.

Self-harm or threats of self-harm happened 65 times. The attempted suicide of an unaccompanied minor in Victoria apparently caused psychological injury to a worker. Another worker on Nauru was traumatised after watching someone drown.

A contractor’s legs were crushed by a vending machine on Nauru and another worker there was splashed with raw sewerage.

A detailed summary of the nature of the incidents listed in the document is available on the ALA website, as is the source document.

The lawyers’ group also asked if Comcare had visited Wickham Point, because the detention centre had 14 self-harm incidents or threats of self-harm over the 12 months and was the only place where a child was suffering hand, foot and mouth disease.

Comcare confirmed to The Mandarin it had undertaken inspections at Wickham Point and identified a number of issues that warranted further investigation, including an incident involving a person swallowing insect repellent. In all instances, no breaches of the WHS Act were found, but “Comcare is continuing to take regulatory action where it is warranted at all detention centres including Wickham Point.”

Top image: Department of Immigration and Border Protection, used under CC BY, cropped from original.