Digital natives don’t like working from home and prefer not to bring their own device, according to research conducted by the Australian Tax Office with its own workforce.

“The research we did really strongly suggests it is important to co-design with your workforce in order to be sure that the assumptions you are making about their needs and requirements are not just assumptions, that they are actually reflecting the needs of the workforce,” ATO People deputy commissioner Jacqueline Curtis told the Australia and New Zealand School of Government conference earlier this month.

Describing herself as a ‘digital stranger’ — a category that includes most people born before 1980 — Curtis revealed that 75% of the 18,500-strong ATO workforce is also a digital stranger. Perhaps problematically, this includes most of the agency’s leadership, “and we are making the decisions about the technology, capability, development, and processes and procedures that are going to be in place for the generation that’s coming through.”

She offered a quick guide to telling whether you are a digital stranger: “think about the way you use technology. Do you print your emails out? Do you tend to print a document and then edit it and then do it on the computer and send it back? Do you bring people into your office or around your workspace to share a website with them rather than sending them the URL? Do you call someone and say ‘did you get my email’? A digital native would never do that!” 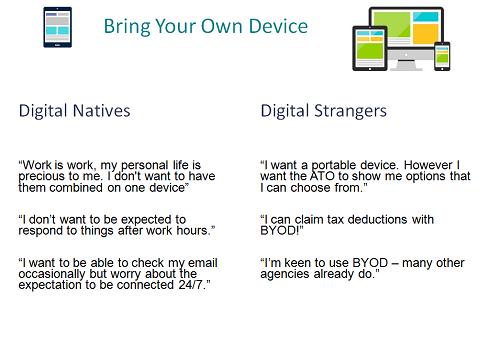 The research tested some of the assumptions the ATO leadership had been working with around decisions on investing in technology, she explained.

“This is what was really surprising to me. Digital natives are not necessarily embracing the ideas and concepts of technology that we as senior staff and digital strangers think they will. When we asked them about their own device and bringing their own device, many of them said to us, ‘work is work and personal is personal. We don’t want one device for both work and personal.’

“Digital strangers, on the other hand, said they were really happy to use digital devices and they think it’s really useful to them and helps them when they’re claiming their tax deductions, all sorts of useful things that help them in their life. So there’s a different mindset we need to think about when we’re thinking about these two groups of people. 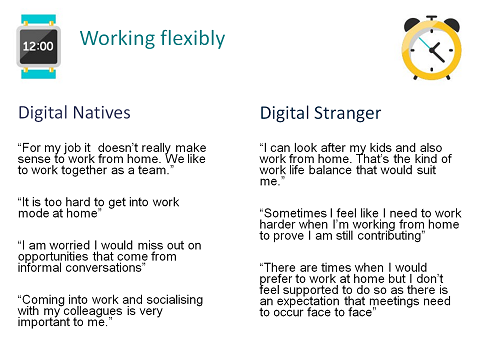 They also discovered that older workers tend to be more positive about the idea of working from home.

“The other thing that digital strangers said was that it was much more helpful for them managing and juggling their lives whereas digital natives felt that they wanted to come to work. They wanted structure, they wanted oversight and they wanted confidence that there would be somebody there to help them in the workplace. They also said they liked the social interaction that they got from work.”

The unexpected findings of the research emphasised the importance of asking your workforce what they think, rather than assuming.

“Collaboration and co-design is critical if we’re going to get this right. If we’re going to provide our workforce with the tools and experiences they need to grow, we need to think of not digital natives and digital strangers, but a whole continuum from the very young who will be immersed in technology from a very young age, right through to the older generations where we will see people like my mother, scary as it may be, in the workforce. And the whole range of skills, capabilities and requirements that they will have to be able to drive the changes we are saying we need to deliver better outcomes for our citizens,” she said. 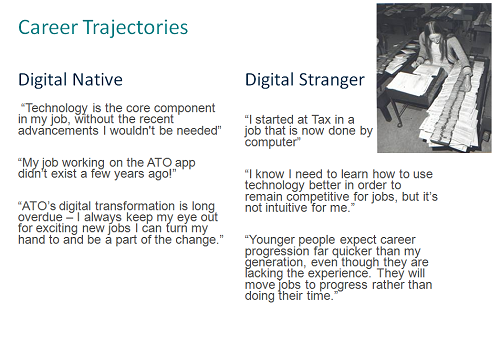 […] ATO finds myths dominate digital workplace 'rules' Perhaps problematically, this includes most of the agency's leadership, “and we are making the decisions about the technology, capability, development, and processes and procedures that are going to be in place for the generation that's coming through.”. Read more on The Mandarin (registration) […]

[…] It outlines several prescriptions which form the building blocks for the activities. It enables both new and existing businesses to focus on operational as well as strategic management and marketing plans. The Lean Canvas, on the other hand, has been proposed by Ash Maurya as a development of the Business Model Generation. ATO finds myths dominate digital workplace 'rules' | The Mandarin. […]