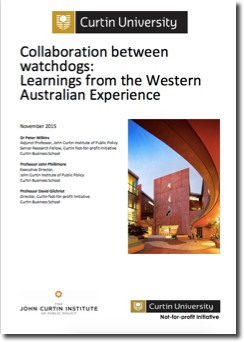 Watchdogs such as auditors-general and ombudsmen are required by their legislation to act independently. But what if watchdogs work together and communicate with each other? Can they still provide oversight?

In a 2013 public lecture, Western Australia chief justice Wayne Martin raised a number of concerns about the collaboration that occurs between five watchdogs in Western Australia that meet as the Integrity Co-ordinating Group. He queried whether they remain fully accountable to Parliament or whether they can oversight each other. Further, could a collaborative exercise go beyond what parliament intended for each watchdog individually?

The Chief Justice’s concerns were taken up by the Parliament. In 2014 a committee report identified the risk posed by a possible conflict of interest as a consequence of the relationship the Crime and Corruption Commission had with the ICG agencies and the possible diminution of the CCC’s ability to oversight them.

In light of these concerns, we decided to look in more detail at the collaboration activities of WA watchdogs and issued our report into this study recently. We identified 13 examples of collaboration of different degrees of intensity. Some involved capacity building, such as staff secondments. Many involved joint communication, such as ICG meetings, events, notifications and information provision. Others involved collaborating on investigations.

The majority aimed to improve effectiveness. For instance, the ICG created several joint communications for the public sector on issues such as “integrity in decision-making” and “gifts, benefits and hospitality”. Presenting in a single package the requirements and advice of several watchdogs and using consistent terminology can boost impact by removing the tensions and potential ambiguities of having separate but overlapping guidelines from each watchdog. Improved efficiency was also identified in some examples. For instance, a primary benefit of the ICG meetings is to prevent unnecessary duplication and administrative burdens that could arise from the watchdogs fulfilling their roles in isolation.

A notable example of collaboration arose following a major disturbance in 2013 at the Banksia Hill Juvenile Detention Centre. The Inspector of Custodial Services and the Auditor-General conducted separate investigations and provided reports to Parliament on the same day, containing two interrelated but independently formed perspectives on issues relevant to the events at the centre. There were also other concurrent forms of involvement in the issues by the Ombudsman and the Commissioner for Children and Young People.

The federation also provides examples of watchdog collaboration. The WA Auditor-General, along with six other auditors-general, investigated the implementation by their jurisdiction of the National Partnership Agreement on Homelessness. He emphasised that decisions about scope and methodology were made independently while having an objective and addressing questions that were broadly consistent with the other auditors-general. The report by the Commonwealth Auditor-General included an overview of the available concurrent reports, drawing together common themes and of how those reports contributed to his conclusions.

It was also evident that WA watchdogs are very vigilant about protecting their independence and we did not identify any examples of adverse impacts in practice. Their operations are already subject to a variety of oversight and scrutiny mechanisms including by parliamentary committees, indicating to us that there are reasonable checks and balances in place.

As to watchdogs oversighting each other, this is provided for under their respective statutes. For instance, the Auditor-General audits all the other watchdogs (and his office is subject to independent audit) and the Public Sector Commissioner can undertake reviews or special inquiries of all the watchdogs or their offices. We did not find any indication that collaboration limited in any way the effectiveness of their oversight of each other.

While different perspectives have emerged from parliamentary committee inquiries, the Parliament has been both cautious and innovative in its responses to overlap between watchdog roles and authorising a wide range of collaborative practices. For instance, in addition to the legislative conditions identified above, there are provisions for the Ombudsman to disclose information obtained in the course of, or for the purpose of, an investigation to certain other watchdogs, provided the information is relevant to the functions of the other watchdog.

More expansively, the legislation that created the Corruption and Crime Commission gave it the power to consult, co-operate and exchange information with certain other WA watchdogs to fulfil its functions. Furthermore, recent legislation has introduced specific provisions to support collaboration between the Public Sector Commission and the CCC in conjunction with the shifting of responsibility for minor misconduct of public officers and for misconduct prevention and education programs from the CCC to the Public Sector Commission.

Overall, we observed that the raising of concerns by the chief justice in 2013 has led to a healthy debate about collaboration between watchdogs and has laid the foundations for ongoing consideration of the best means of their work contributing to the accountability and integrity of the public sector.

Dr Peter Wilkins is an adjunct professor at Curtin University with the John Curtin Institute of Public Policy and Senior Research Fellow in the Curtin Not-for-profit Initiative. He served as Western Australia’s deputy ombudsman from 2008 to 2012, and prior to this had been WA assistant auditor-general - performance review. Professor John Phillimore is the executive director of the John Curtin Institute of Public Policy at Curtin University. He has 30 years' experience working in universities and as a senior adviser to government ministers in Western Australia. Professor David Gilchrist is director of Curtin University's Curtin Not-for-profit Initiative. He is an accountant and an historian with over 20 years' experience in the not-for-profit and charitable sector in Australia and the United Kingdom. He was a previous assistant auditor-general at the Office of the Auditor General between 2008 and 2011.