It’s an “extraordinarily strange” feeling going from being a “nameless bureaucrat” known only within the public service to an author with a public profile, Maria Katsonis explains.

Her memoir, The Good Greek Girl, tracks her life as the daughter of Greek migrants who turned out to be gay, dropped out of a nine-tenths finished economics degree for the theatre, was accepted into the Harvard Kennedy School to study a master of public administration and ended up a senior Victorian Department of Premier and Cabinet bureaucrat, before developing and eventually recovering from depression that left her in bed for weeks on end.

She never thought such an all-consuming mental illness would afflict someone like her, a senior public servant with a degree from Harvard. Yet after weeks of near-paralysis, where she would struggle to get out of bed and then sit in front of her computer blankly, Katsonis began a path to recovery comprising five weeks in hospital and another month off work.

Though some counselled against disclosing her experience at work, she did — and was pleasantly surprised at the supportive response from her colleagues. 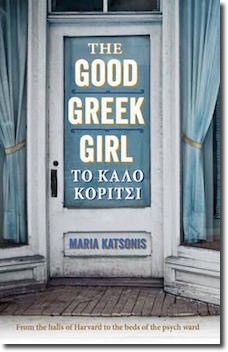 These days she’s a beyondblue ambassador, and in recent years has held a range of jobs at DPC — as director of governance, special adviser on productivity and delivery and special adviser on strategy and innovation. Before that she spent four years in charge of the unit with responsibility for policy and organisational reviews requested by the government at the State Services Authority.

Writing such a revealing story is an uncommon move in a sector well known for its reluctance to stick its head above the parapet. But Katsonis is balancing her role as the author — she’s done four book events in the past week, she tells The Mandarin — with an acute awareness of the sensitivities of her job.

While she keeps the two as separate as possible, sometimes there’s crossover. She was recently in a meeting with a former Victorian departmental secretary and after the substantive work was done, he told her he loved her memoir. “I kind of forget people might have read my book!”

While publishing a highly personal memoir doesn’t perhaps fit the stereotype of the cautious public servant, Katsonis admits she has “quite a significant risk appetite” compared to others. Whenever she fills out the kind of risk spectrum test often found on public sector risk management courses, “I will always come up as the cowboy”.

“And yes I have a risk management plan. But the kind of risks I deal with now are nothing compared to putting a circus rig in city square, which is what I used to do as an event producer. I did all the outdoor entertainment for the very first Grand Prix, and ran five stages at Moomba — at the same time. That’s risk!”

Before joining the public service in 1997, Katsonis had a career in arts administration. She thought her first stint, at Arts Victoria, would just be a temporary diversion from the theatre, but found an even greater passion in government.

A director of equality

Katsonis is now in charge of Australia’s first dedicated LGBTI policy unit to be placed in a Department of Premier and Cabinet, rather than a social policy portfolio. As director of equality she’s charged with leading a co-ordinated approach to the LGBTI reforms promised by the one-year-old Andrews government, such as on same-sex adoption, discrimination in schools and services and diversity in rural and regional areas.

They don’t want to be seen as the centre for everything LGBTI, but rather as ensuring input across a range of areas. The government is currently developing a 10-year mental health strategy, for example, so Katsonis’ team of six is looking at the issues LGBTI people face in mental health.

“You think about what tools we have at our disposal, it’s our written communication skills.”

Even within the public service itself, there’s still room for improvement on recognising diversity in gender and sexuality. Victoria and other governments lag behind private sector leaders on Pride in Diversity’s top LGBTI employers. For the first time next year the VPS will be represented in Melbourne’s Pride March, and there’ll be a stall staffed by public servants at the Midsumma Carnival in January. DPC’s first ever pride network was set up only this year, and other departments are now following suit.

This points to one of the reasons Katsonis likes working in a central agency. Apart from the thrill of having input into key decision-making processes, DPC offers a leadership role, a chance to foster what she calls “an authorising environment”. While DPC is often seen as the police officer of the policy process, it can use its influence to support those wanting to make changes in their own line departments, too.

One such initiative Katsonis worked on a few years ago was the development of Victoria’s Government 2.0 Action Plan. This document, blessed with the imprimatur of all the departmental secretaries, “provided an environment for other departments and the policy entrepreneurs and the innovators in other departments to use that as leverage” to get their own departments on board with the shift to government 2.0 — especially in more risk averse areas.

As a writer, Katsonis is naturally passionate about words. Buzzwords like agile, user-centred design and transformation — typically found in the latest discussion papers on public sector reform from firms outside the public service — drive her wild. These “generic categorisations” too often miss the mark on the complexities of government and the drivers of bureaucratic behaviour, she thinks.

Her experience has also taught her the power of narratives and the importance of brevity. When writing a brief, “think about the audience”, she argues — will the minister be reading it in the back of a car between appointments? The best writing introduction she ever had was when she started out her public service career at Arts Victoria during the time Jeff Kennett was balancing the jobs of both arts minister and premier.

“We were told that every brief — and this was really strictly applied — had to be one page long, with two attachments, and every sentence had to have no more than 10 words. All of us went ‘oh my God, how dare they, I have this freedom and I am creative’,” she remembered.

But now she applies similar rules, even if she’s not quite so strict. “If there’s more than maybe 14 words, that’s not a sentence, that’s a paragraph,” she said.

“You think about what tools we have at our disposal, it’s our written communication skills.

“It never ceases to amaze me on the writing side, year in year out IPAA will run a writing course and it will be full to the rafters. It seems to me that the skills we need to write are out there, we just need to be able to bring it all together. It is about understanding storytelling.”