The trimmed-down APS State of Service 2014-2015 Report represents a new and modern approach to communications taken by a new Australian Public Service Commissioner, but there are those who want to know where the rest of it is.

The State of the Service blog has been running since August and is intrinsically linked to the 52-page document tabled in Parliament on Monday. Short posts explaining new statistical information about the Australian Public Service have appeared weekly since then, and amassed a not-too-shabby 25,000 page views.

While last year’s effort from Stephen Sedgwick was helpfully presented in an HTML format, making it easier to navigate, it was essentially an update of its 16 predecessors and the mid-year updates that accompany them. Commissioner John Lloyd’s new approach is significantly different, but the full report is again available for online browsing.

The previous reports were much longer, but they also contained a considerable amount of writing that was simply copied and pasted from the preceding edition, sometimes with minor changes, sometimes not. That’s not because those writing them were lazy, just that much of the data concerned long-term trends and thinking up a new way to describe them would be a waste of time.

Those on the Labor side of politics aren’t great fans of Lloyd, so it was not unexpected that ACT senator and former chief minister Katy Gallagher has attacked the commission for producing a report she says is too short, and too negative. Perhaps she has eagerly awaited each previous installment of the annual document and read from cover to cover, and has written to Lloyd to explain what specific details and analysis she believes have gone missing this year.

Department of Finance secretary Jane Halton is determined to do something similar with annual reports. Among the major management reforms and transformation initiatives her department is stewarding, Halton also wants to make the performance information annual reports contain much more accessible, sharable and engaging. The Productivity Commission’s chair Peter Harris has overseen a similar shift in approach.

One could argue such data stands more chance of having some impact if it is easier for busy people to get through, but there will be those who suggest that simplifying and spacing out its delivery is an attempt to evade accountability. 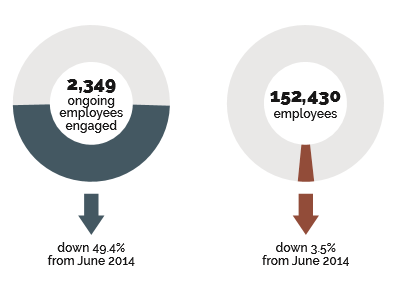 If the report is “negative”, the APSC is doing a reasonably good job of hiding it. The blog post announcing it had been tabled certainly isn’t negative and nor is the quote from Lloyd featured in it. It does, however, mention the growth of non-ongoing positions as a positive thing “consistent with the goal of achieving a more agile and responsive workforce”, which is certainly debatable. The shift could be seen to erode the public service’s role as a model employer that provides stable, secure employment with good pay and conditions, for employees who are appointed based on merit.

Lloyd made further changes to the commissioner’s directions this week on top of others from July to make the APS workforce even more “flexible” and give more freedom to agency heads around recruitment, redundancy payments and retirement incentives for senior executives.

This year’s data shows overall “engagement” measures have remained high and nearly unchanged from last year and the commissioner comments that “when considered against a backdrop of significant functional and structural reforms”, this is good to see.

There are, as always, “significant variations” between staff in different jobs, teams and agencies, “specialist and policy agencies were consistently rated higher” which isn’t surprising either, and senior executives are a little bit too optimistic about how keen their staff are.

Those who leave APS employment mostly do so by choice, are the least engaged in their work, and most commonly leave because they perceive a lack of future career opportunities. And on the bright side, the new-look SoSR suggests that former public servants contribute to society in valuable ways, using their public service experience, and that every vacancy is also “an opportunity for organisational renewal”.

The data shows the last year has seen a 3.5% reduction in the number of employees and almost a 50% reduction in new permanent hires. Along with a significant amount of data and analysis that a person could realistically read in an afternoon, the new report focuses on four themes: