Victoria continues to make progress on the number of women in leadership roles in its public service, with females comprising 44% of public sector executive positions in 2015.

This is a significant increase on the 2010 figure of 38.7%, according to the Victorian Public Sector Commission’s latest State of the Public Sector report. One VPS executive also identified as intersex.

In New South Wales, around 41.8% of public service executives are women.

“The increase reflects a concerted effort and strong commitment from public sector leaders to increase the numbers of women at executive level to levels more proportionate to their levels of participation in the workforce,” she told The Mandarin.

“We have achieved this by increasing development opportunities for women and increasing awareness of barriers such as unconscious bias at work in promotion processes, while still applying the merit principle.”

Among Victoria’s seven departments, three are more than half female at the top levels, with the Department of Health and Human Services on 57.4%, Education and Training on 52% and Justice and Regulation on 51.9%.

The Department of Premier and Cabinet was lowest, at 35.7%, closely followed by Treasury and Finance on 35.9% and Economic Development, Jobs, Transport and Resources on 36%. Environment, Land, Water and Planning’s executive level was 46% women. 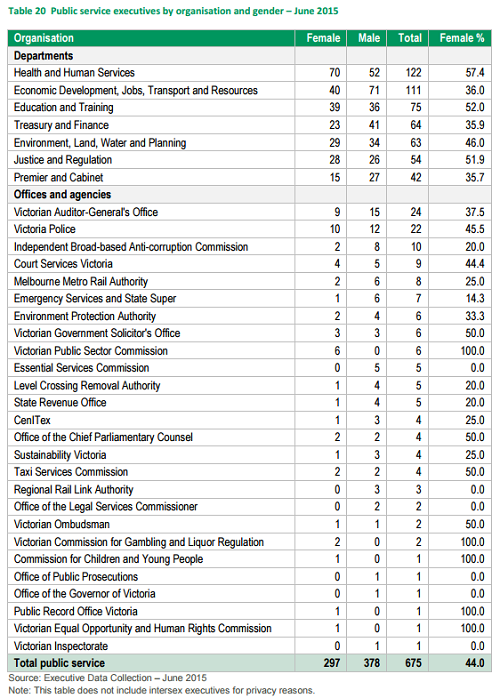 The public service does better than public sector workers as a whole, which increased the number of women in executive roles from 33.4% in 2010 to 38.9% last year.

Across the whole public sector 67% of the workforce was female — due to the high number of teachers and health care workers — whereas 60% of the total public service workforce are women.

As at June 2015, the median annual base salary of non-casual employees in the Victorian public sector was $73,283, while the median total remuneration package of a public sector executive was $195,258. The public sector accounts for 8.9% of the state’s workforce — around 278,000 people. Just under 35,000 of those work for the public service.

Although Clark is proud of Victoria’s progress on helping women reach public sector leadership roles, she says there’s more work to be done.