In a strange interpretation of the Freedom of Information Act, an Air Force FOI officer has released a document detailing Prime Minister Malcolm Turnbull’s in-flight meal preferences — but blanked out every line of information.

Even more strangely, the document in question — known as his 34 Squadron catering profile — is identical to one that was released in February 2013, pertaining to Turnbull’s last two predecessors.

It shows Tony Abbott’s prohibition on baked beans for breakfast, his dislike of yoghurt and his preference for Earl Grey tea. The earlier applicant also learned that Kevin Rudd is a muesli-eating health nut who only likes iceberg lettuce in his salads — just “a LITTLE amount” — and dislikes quiche, squishy over-ripe bananas and offal.

The complete redaction of the exact same Air Force form just under three years later goes to show how much room there is for differing interpretations of the legislation. Releasing a document with all the information it contains blocked out also neatly exemplifies the many utterly pointless outcomes produced when the pro-disclosure FOI framework meets staunch opposition from ministers and senior officials.

“… they ‘would not inform public debate on any matter of public importance in any meaningful way’.”

Along with the blank page, the Air Force issued a typical explanation of how Group Captain Caroline Wallis came to the decision, which runs to more than 1000 words.

She decided that Turnbull’s privacy outweighed any minor public interest in releasing his dietary choices as they “would not inform public debate on any matter of public importance in any meaningful way” or “promote oversight of public expenditure” either, because the costs of flying the PM around are already on the public record.

Wallis apparently concluded that since the document met none of the reasons in favour of disclosure set out in the act, it was therefore “contrary to the public interest” to spill the beans on the PM’s culinary choices. There is no explanation of why she believed that withholding the information would be of more benefit to the public than releasing it, as the act requires for such a determination. 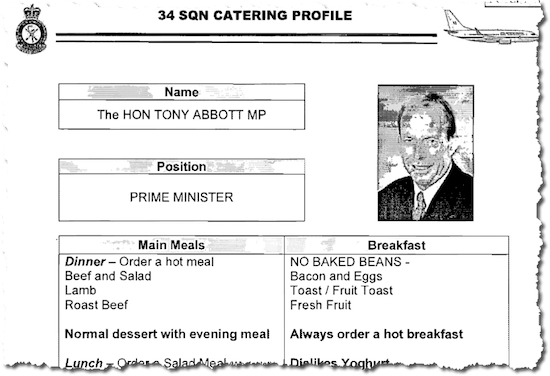 The 2013 request for the in-flight meal preferences of Rudd and Abbott was decided upon by a civilian, Defence assistant secretary Tony Corcoran. His decision-making process was more clearly weighted towards disclosure, as the FOI framework intends.

Corcoran consulted Rudd and Abbott and their respective spouses, but decided in the end that most of the document was public information because “the costs associated with the use of the VIP aircraft are borne by taxpayers”. Even if there was no strong public interest in what he did allow through, he gave the green light because there was no good reason not to.