OPINION: Solutions to many significant social problems can often be found outside of the public service. One former government insider talks about the life-changing decision to look for answers elsewhere.

Innovation has been around since time immemorial; it encompasses the creation of fire, the introduction of micro financing, artificial intelligence, and everything in between.

The current narrative around innovation is focussed on business, technology and start-ups. While this is absolutely necessary we need to think beyond start-ups so that we do not limit its potential to solve complex problems.

Innovation is not just about STEM (Science, Technology, Engineering, and Mathematics), it is about how we collaborate to solve complex problems in new ways, with people with different skill sets and different ways of looking at things The children involved in the Da Vinci Decathlon know this as do the young people doing the global Math or Chemistry Olympiads.

We have a long way to go for innovation to be meaningful and touch the lives of all sectors of our society. 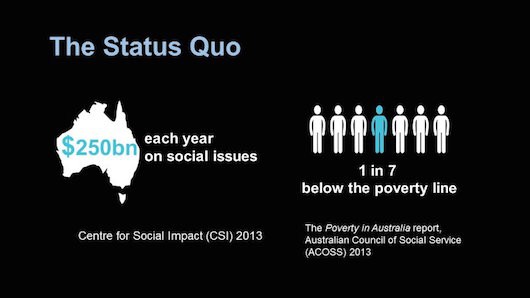 In Australia one in seven adults and one in six children live below the poverty line, despite $250 billion annual expenditure by three levels of government, corporate and fundraising according to work by associate professor Kristy Muir of the Centre for Social Impact in 2013.

This is the worst return on anyone’s investment. Something has to shift and innovation is key.

In the business of social change, people’s lives are at stake. The time has come to shift things radically. There is no time to wait when, despite enormous investment, things just aren’t getting any better.

For 33 years I have been in the social change “business” because I believed things could be better. I was taught to get involved (my parents were active in the Labor Party and the social services sector). From the age of 16, I was a youth advocate and from the age of 21 I worked for several cabinet ministers, NGOs and government agencies at the state and Commonwealth level.

I learnt a lot about how things work and most of all I understood how to get around roadblocks. I moved from the ministerial office to the public service and then to the NGOs, searching for the place where I could make the biggest difference. I wanted to help those who had the power to change things to see what I could see — the need to do better with the resources we had, to apply innovative thinking to the way we solved problems.

“That’s when I discovered the tech and start-up sector.”

It then occurred to me that I couldn’t change things fast enough from any of those places. That’s when I discovered the tech and start-up sector. I was overwhelmed by the resourcefulness, collaboration and creativity.

What I love about GovHack is the fact that it opens up government data and allows these collaborators to solve problems in 48 hours. I know right; “what could be achieved in 48 hours?” you ask. Check out previous years winners and see for yourself.

I am eternally grateful to goddess of tech Nicole Williamson for showing me this world and to goddess of GovHack Pia Waugh for giving me the opportunity to be part of the family. It really changed my life and, as I have said time and again, I found my people and I’ve never looked back.

These methodologies or tools achieve a lot more than years of work in any other paradigm.

We tested this with TechFugees Australia, part of a global movement that supports refugee settlement through technology, founded by Mike Butcher (TechCrunch). Annie Parker (muru-D) brought the concept to bear and in her inimitable style enrolled key thought leaders in tech and start-up including Nicole Williamson and myself.

We formed a formidable team and got the absolutely best in the business to collaborate — Alan Jones (Blue Chilli), Phil Morle (Pollenizer), Joanne Jacobs (Disruptors Handbook), Claudia BL (start-up Milkshake) and many more who gave up their time to come out to Liverpool in Sydney’s western suburbs.

We ran the first social co-design hackathon that included refugees pitching the story and mentoring the teams. The outcomes were nothing short of brilliant. Solutions that were better than anything offered by the tens of millions of dollars invested in NGOs over decades.

Why? Because it was start-ups, entrepreneurs and techs that were committed to finding a solution within a limited timeframe, who collaborated with refugees and NGOs to build solutions that were meaningful and profound — beyond our wildest expectations — resulting in networks and friendships being formed around.

Pollenizer generously agreed to incubate the winning team — a goal setting app Goalify — and the NGOs (Settlement Services International and STARTTS) put up $10,000 for the winning idea to be fully developed. We’ve spent the last few months taking the promising ideas to government and as we all know it will take a while before they complete their evaluation (which in itself is a problem isn’t it?).

Here we have solutions to a recognised problem developed at a fraction of the cost and in less time than one thinks possible and we’re in a holding pattern.

Old economy review for new economy solution = stagnation. In fact Einstein said: “We can’t solve problems by using the same kind of thinking we used when we created them.”

It’s early days. We are patiently taking government on this journey praying they will come through with seed funding and support to bring the many ideas to reality.

The architects of the National Innovation and Science Agenda, delivered with a bang last December, could learn a thing or two from GovHack and TechFugees Australia. While the politicians and bureaucrats are off making $28million ads to promote the ideas boom, they are missing a very real opportunity to mobilise the community that is ready, willing and able to get things happening in the blink of an eye.

The innovation ecosystem is broader than who we see being wheeled out in the media. It is rich, diverse and vibrant and busy getting stuff done. It doesn’t want launches and glitzy campaigns, nor does it need to hear more rhetoric and platitudes. It’s looking for action.

In 2014-15 the Australian Public Service procurement budget blew out to more than $59 billion. As the Treasurer said in his speech at National Press Club:

“So, we have to learn to do more with less. We have to learn to spend better, not more. These are the tasks not just for the federal Budget, but for state budgets as well. Just because someone walks into your office at a business and says they have an 8% increase in their costs does not mean you have to turn around and give them a cheque. That does not happen in business. You were told to reduce that cost estimate by innovation, by change, by doing things differently, by working the problem — asking for a bucket of money from the taxpayer should not be an option for any government in this country.”

If that’s the case, why are we spending $28 million on dumb ads? In this day and age? If we are going to make such a hefty investment, why were they so uninspiring? C’mon, we expect better.

With the exception of the Paul Shetler‘s crack team at the Digital Transformation Office — whose purpose is to make the government more lean and agile and deliver better user-centred services — I’m not seeing much lean or agile behaviour anywhere else. If it’s there, let’s hear about it.

A few weeks ago start-up mentor and innovator Claudia Barriga-Larriviere invited me to speak to a crew at the ABC about innovation and government. Claudia has been taking the ABC through a start-up process and journey to help them innovate and transform from old world to new world thinking. The visionary is CIO Ken Gallacher who had the courage to bring this concept to his team — now that’s major innovation.

“There was a problem. We came up with a solution. We tested it. It worked. So we’ll do it again.”

Last week I was part of a team that delivered the first Conversation — a meet-up just for leaders hosted by Swaab Attorneys. We started small, with a limited list and were blown away when 35 of the 50 guests invited took the risk and cleared their diary at short notice to attend an informal BBQ lunch at which we chose to observe Chatham House rules.

I mention Swaab Attorneys because I wanted to take the opportunity to recognise Fred Swaab, the firm’s founder. Fred passed away the night before the gathering. The firm decided to go ahead in his memory. Fred was an entrepreneur, a founder, an investor, a customer and a passionate advocate for innovators in Australia. His legacy is secure under the leadership of the firm’s managing partner Mary Digiglio who continues Fred’s commitment to innovation and entrepreneurship.

There were no long speeches at the lunch, nor was there any formality. It was simply an opportunity for leaders to gather, catch up on what was happening across the ecosystem, resolve outstanding issues, swap ideas, offer insight and chew the fat. I know for a fact it also saved people organising 10 meetings, because guests took the opportunity to “catch up at the lunch”.

There was a problem. We came up with a solution. We tested it. It worked. So we’ll do it again.

Why it’s up to us

The ecosystem only works when all the elements work together at the same time. So we can’t rely on just the politicians and bureaucrats. Nor can we leave it to the hubs and their start-ups, or the VCs for that matter .

It is up to each one of us to lead and show the chutzpah needed to effect the change the nation so desperately needs.

As Luke Sayers, CEO of PwC Australia and vice chairman of PwC Asia Pacific, observed on his blog:

“Is it because we’re used to being the world’s mine, and don’t see ourselves as the source of latest technology and innovation? Are we too used to waiting for the next wave of disruption to arrive from abroad, rather than trying to set it off ourselves? Whatever the cause, this attitude must change if we’re going to grow and prosper in the years and decades to come.”

So who’s up for big conversations? Who wants to lead the change? I am ready. Are you?

This article was originally published on LinkedIn

Anne-Marie Elias is a speaker and consultant in innovation and disruption for social change. She is an honorary Aasociate of the Institute for Public Policy and Governance, UTS.

Our best offer. 50% off Premium