Australia has had to fight every step for its tobacco plain packaging regulation since it was introduced in 2012, but it was worth it, a regulatory review has found.

Australia’s tobacco plain packaging reform is having its intended effect of cutting smoking rates and is expected to bring further benefits into the future, a regulatory review conducted by the Department of Health has concluded.

Though it’s difficult to attribute concrete numbers given how many anti-tobacco measures are in place, the policy has been responsible for perhaps one quarter of the 2.2% drop in the smoking rate since it was introduced. Since 2012 the number of smokers has fallen from 19.4% of the population to 17.2%.

Plain packaging “is achieving its aim of improving public health in Australia and is expected to have substantial public health outcomes into the future”, the post implementation review states.

Replacing branding and colour with graphic health warnings and plain fonts had led to a “statistically significant decline in smoking prevalence [among Australians aged 14 years and over] of 0.55 percentage points over the post-implementation period, relative to what the prevalence would have been without the packaging changes”, an appendix study by economist Tasneem Chipty of Analysis Group says.

Chipty also believes the “effect is likely understated and is expected to grow over time” as it prevents more people starting smoking, discourages relapses in those giving up and encourages current smokers to stop. 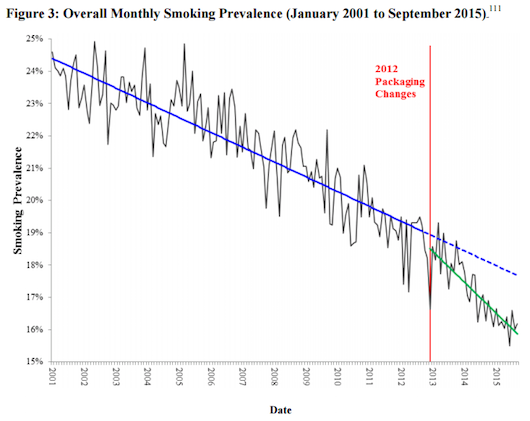 The review was conducted by Department of Health in accordance with rules on post implementation reviews administered by the Office of Best Practice Regulation.

The report also provided estimates of the cost of regulatory compliance for the tobacco industry. Although it stated that cost to be around $74 million, it also noted these numbers were provided by tobacco companies and that “costs submissions received from the tobacco industry were at a high level of generality and were not able to be independently verified.”

It was also difficult to work out what the overall monetary benefit of the regulation would be, given that the bulk of positive impacts would be long term. The report continued:

“Nevertheless, the qualitative discussion of the benefits and illustrative example given provide an indication of how such benefits are expected to result in significant monetised savings as a result of the measure. Even very small impacts on tobacco prevalence attributable to the measure will result in very large monetised health benefits once realised. Indeed, even a drop in smoking prevalence of 0.07 percentage points (or 15,057 people) evenly distributed over ten years would generate an estimated monetary value equivalent to $273 million.”

“Their general view was that tobacco plain packaging has had some, or a significant, impact on reducing the appeal of tobacco products, increasing the effectiveness of graphic health warnings, and reducing the ability of retail packaging to mislead consumers about the harmful effects of smoking. … Most of these stakeholders reported they believed that the tobacco plain packaging measure has been somewhat or very efficient in achieving its objectives. One health related NGO also noted that the measure was particularly efficient in rural and remote areas where other tobacco control measures may have less reach.”

In other stakeholder consultations, tobacco industry stakeholders, retailers, non-health related NGOs and most individual respondents — the vast majority of whom were smokers — generally took a negative view on the impact of tobacco plain packaging, arguing “that tobacco plain packaging has not discouraged uptake, encouraged quitting or discouraged relapse” and that “smoking incidence has increased, prevalence has remained the same, and consumption and expenditure has remained the same or increased.”

A previous study found that smokers dislike looking at the graphic health warnings that now feature more prominently on cigarette packets. Following the implementation of the measure there was a sustained increase in the number of smokers who reported concealing their packs or decanting their tobacco products and there was an immediate and sustained increase in smokers requesting different graphic health warnings when purchasing cigarettes.

Another study found a 78% increase in the number of calls to the Quitline in NSW following the introduction of tobacco plain packaging and enlarged graphic health warnings.