Victorian public servants are voting on a generous new service-wide enterprise agreement, with the main public sector union advising its members to take it, in stark contrast to conservative-held jurisdictions.

The enterprise bargaining stand-off continues at federal level, with airport-based Department of Agriculture and Water Resources staff announcing a strike for 24 hours on Monday, April 18. In Western Australia, a similar government-wide industrial dispute looks set to break out in the lead-up to an election, while the Tasmanian Premier is trying to soften the impact of his own wage austerity plans.

“… I congratulate the government on taking this progressive employment step.”

“The wage outcome is 3.25% per annum for 4 years,” Community and Public Sector Union state secretary Karen Batt happily reported to members in a recent speech.

The pay rises will come every six months, in 1.75% increments on January 1 and 1.5% increases on July 1 for 48 months, which “compounds nicely to 3.44% per annum” according to Batt. She said half of the VPS had been stuck at the top of their pay grade due to a recruitment freeze imposed by the previous government.

“As part of this new deal the new government has agreed to pay a 1% bonus for those staff who complete a performance plan and don’t have access to progression points within their classification,” she added.

“The agreement also recognises the misuse of the grade 1 classification (mainly by VicPol) and as a result, all VPS1’s covered by the agreement will be reclassified to grade 2 and grade 1 will be used solely as the training wage for a new cadetship for disadvantaged youth, Indigenous and disabled youth that may want to work in the public service.”

The public sector cadetships will lead to a Certificate III in Government and include guaranteed employment at grade 2 on successful completion. Youth Employment Scheme traineeships will continue.

The new EBA will also standardise procedures in a wide range of areas like misconduct, grievances, bullying and harassment, performance and progression, and misuse of resources, and includes a commitment to “secure” employment.

In a landmark provision, the union can now seek review of temporary work arrangements, ask that they be converted to ongoing, and take any disputes to the Fair Work Commission.

“This is a mighty step for an employer but this will provide women who are largely employed by agencies as labour hire, casuals or fixed term with a review mechanism and I congratulate the government on taking this progressive employment step,” Batt said.

Victorian public servants won’t bear the cost of appearing before proceedings of various investigative agencies under the proposed EBA, and they get three extra days of annual leave at Christmas time in addition to 20 for the year. To deal with “excessive leave accrual” the union agreed to a clause allowing agencies to ask employees to take leave when they rack up eight weeks, or 10 weeks for shift workers. But the improved deal doesn’t end there.

Annual leave can now be cashed out once per employee at any time in the 48-month agreement, Batt said, and statutory declarations can once again take the place of doctor’s certificates for sick leave. “This is in addition to the 5 days without certificate,” said Batt.

There is also three days paid cultural and ceremonial leave and one for NAIDOC Day, as well as up to 20 days paid family violence leave for victims or supporters of victims.

“The clause is gender neutral which better reflects the nature of Victorian families, and it has a lower threshold for evidence requirements and has a process for confidential management of information,” Batt explained.

“There are many additional matters dealt with in this agreement such as the process for roster change now being required to take account of impact on family life, work life balance, impact on take home pay; these changes will mean that Corrections (for example) will have to give consideration to these issues and not just ram through a proposed 12 hour shift roster as they tried to do at HM Dame Phyllis Frost Centre over the past 18 months,” said Batt.

The federal government’s enterprise bargaining deadlock continues with both sides ramping up the aggression of their tactics and rhetoric. The Australian Public Service Commission claims the momentum is swinging behind ‘yes’ votes — releasing a graph showing a sharply rising line that represents the number of new agreements signed. 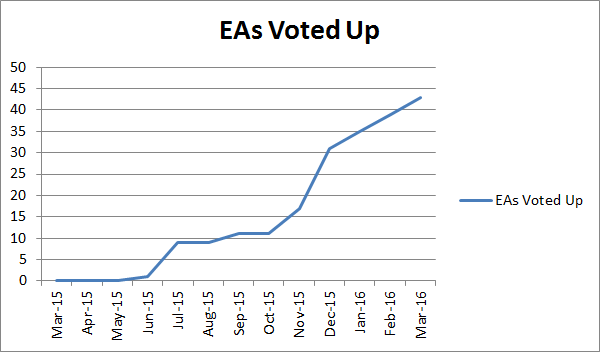 The CPSU prefers to look at the total number of employees working for agencies that have accepted an EBA. With some of the hold-outs being the biggest and most unionised entities, it says “more than four out of five” or about 120,000 federal bureaucrats work in agencies yet to sign a new deal in over two years. The government has ruled out back-pay.

In contrast to the service-wide agreement in Victoria, the Commonwealth maintains a strange situation where each entity negotiates a separate agreement, but all are subject to a single enterprise bargaining policy that strictly limits what they can agree to.

The WA government also applying an overall austerity policy that caps all public service wage rises at 1.5%, lining it up for a stoush with union members in a large number of agencies whose agreements will expire before the next election.

“While the Government has achieved considerable success in recent years in reining in unsustainable growth in salary expenses — bringing annual average growth down to 4.5 per cent over the period 2012-13 to 2014-15 after a decade average of 7.8 per cent — further efforts are required in light of declines in revenues,” Treasurer Mike Nahan said.

The public sector union’s state branch secretary Toni Walkington said Nahan “appears to want to create an argument with the public service before the bulk of negotiations even commence,” and indicated 1.5% was not acceptable as it would see real pay go backwards.

Belt-tightening is also on the agenda in Tasmania, where this week Premier Will Hodgman has proposed that state parliamentarians reject a 10.5% pay rise recommended by the Tasmanian Industrial Commission and go for a more modest 2.4% in line with the wage-price index. But the local public sector union secretary Tom Lynch says it’s all a political ploy, as the upper house is likely to block the proposal.

Adaptive strategies in a changed world