So, you’ve got a great idea, the funding is in the bag, and your business model has been well crafted. Success is guaranteed, right? Wrong! According to research by serial entrepreneur Bill Gross, which he discussed in a recent TED talk, the two most important factors for success for start-ups are “timing” and “team.”

Similarly, in their book How Google Works, three senior executives at the company — Eric Schmidt, Jonathan Rosenberg and Alan Eagle — note that venture capitalists “will always follow the maxim of investing in the team, not the plan.”

Indeed, the previous mantra of “set the goal, plan and implement” is increasingly being replaced by a context-centric framework better adapted to a world characterized by more volatility, uncertainty, complexity and ambiguity. And in this world, human insight is needed more than ever.

It’s not just start-ups launching their first products on the market which face “critical moments.” Every company has them. More and more multinationals or entire industries have to transform their organizations from top to bottom following digital disruption.

But thankfully, what makes teams successful at start-ups can also be applied to large firms. Over the last 20 years, I have had the opportunity to directly hire and/or follow the performance of several hundred key employees working on strategic initiatives. I have observed that when things go wrong, in most cases it is related to one or several of the following dimensions, which I refer to as the PIKES model.

PIKES stands for Purpose, Integration, Knowledge, Ecosystem, and Self. Although we look at each dimension separately below, the whole is greater than the sum of its parts. This is particularly essential for task forces or teams in charge of key implementations.

From a management standpoint, having the right team means first selecting it and then, importantly, nurturing it.

Below are some risk factors as well as recommendations on how to pick the right people and nurture existing team members: 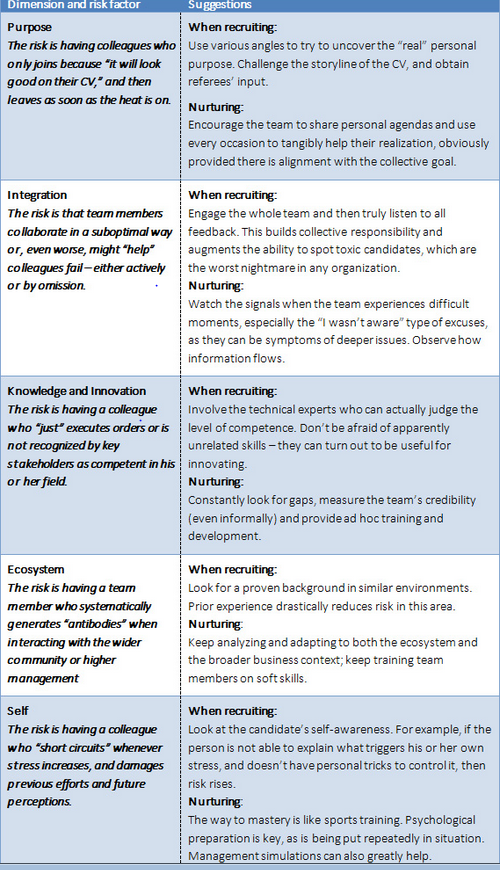 So far we have looked at PIKES from a team manager’s perspective, and as such each of the elements can be reinforced through appropriate incentives. However, PIKES is even more useful when it is applied to your own personal development journey. Think of it this way: purpose is about coherence between our aspirations and what we actually do, integration about the way each of us is able to interact in team settings, knowledge, about continuous competency building, ecosystem refers to our business insight and managing self is really about our emotions. As a consequence, the common denominator between a managerial approach to PIKES and applying the concept to you is that both require conscious life-long learning. Therefore leaders should look for team members who have evolution in their DNA.

Last but not least, teams are like mirrors; they reflect the ability of top management to translate their vision into reality. So the pressure is on to choose the right people and then nurture them. The buzz phrase “people are our most important asset” really does say it all.

Back to the original question: Do you have the right implementation team?