The APS will rapidly find itself not fit for purpose if it doesn’t modernise workforce practices, a new review says. Mandarins have committed to adopt sweeping reforms that will put serious competition into key roles.

The Australian public service will rapidly find it is not fit for purpose if it doesn’t modernise human resources and workforce practices, an external review released today has found.

Some HR functions will be centralised and some outsourced from the public service entirely under a set of proposals commissioned by APS commissioner John Lloyd and recently endorsed by the Secretaries Board.

The APS workforce management contestability review, conducted by experienced private sector director Sandra McPhee, dared the APS to adopt her improvements immediately with the provocative tagline: “If not us, who? If not now, when?”

McPhee’s call to action has spawned a series of deputy secretary working groups since the findings were made available to the APS in December.

Central to her report is the contention that the APS has become insular and resistant to the changes that have occurred elsewhere in the workforce, and in other governments. The APS is facing vigorous competition from the private sector and must catch up, McPhee writes:

“The private sector does not have a monopoly on best practice. However there are aspects of workforce management that apply in all operating environments. There is benefit in the APS looking beyond itself to identify what works and what best looks like.”

What does the Commonwealth’s agenda for a smaller, more agile government look like when the total public sector in Australia is already on the low end globally at just 16% of the workforce? Commonwealth employees collectively only make up 2% of the workforce, and the APS itself is barely 1%.

Rather than demand more resources, the APS needs to become even more slim, more agile and more responsive to changing demands, McPhee says — and that means some serious HR changes, notably, and perhaps controversially, around recruitment, employee mobility and separations. Some of these changes will require legislative amendments cutting into culturally-engrained “entitlements”.

HR also needs a voice in strategic business decisions, she writes, putting the onus on department secretaries to take personal responsibility for tearing down the business/HR divide. McPhee writes:

“Current and future business priorities must be the basis of workforce planning, and issues relating to people — an organisation’s most important resource — must be considered at the highest level.” 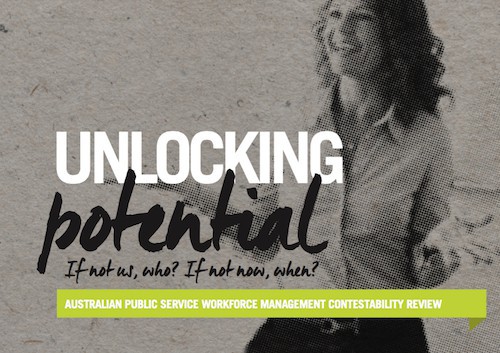 How to reach the top in the new APS

Department heads were not let off the hook by the review, which found talent management has been inconsistent across the APS, and completely absent in some portfolios. Secretaries were told they need to be visibly accountable for talent management.

Top-level talent management — SES band 3s and 2s — will now be directly led by Department of the Prime Minister and Cabinet secretary Martin Parkinson and Lloyd, with support from the Australian Public Service Commission. Those identified as strong performers will be developed to become future secretaries and agency heads, and be given strategic secondments and critical projects. While those who are no longer a good fit with the needs of the agency or the APS will get an overdue tap on the shoulder.

Further down the chain, whole-of-APS “talent councils” will be rolled out, consisting of agency heads and band 3s and 2s who will be charged with making talent decisions in the best interests of the wider APS. The councils will report to the Secretaries Board on critical cohorts, such as high-level IT or finance skills, deemed of vital importance to APS business.

Public servants have been told to accept that no job is for life. Their roles may significantly change or cease to exist as digital transformation reshapes the way government delivers services and increasing contestability means some functions will no longer need to exist in the public service at all.

Instead, the APS needs to seek out the agile employee. Interesting, varied and rewarding work is needed to attract these best and brightest, McPhee writes:

“Maintaining capability into the future will mean catching the attention and the imagination of the agile employee. Agile employees are increasingly in demand. Agile teams work at pace, ‘sprinting’ to produce new products or outputs. Once the objective has been achieved, agile teams disband and move onto new challenges. Agile working generally involves a high level of collaboration and a high level of mobility across projects and roles.

“Agile employees are problem solvers, collaborative and resilient through change. They work best in small, cross-functional mission teams to address emerging business threats and opportunities. They are a resource that can be mobilised to work on complex or perennial challenges.

“Their work is characterised by rapid decision-making, design thinking and controlled risk taking. Preliminary models or drafts are generated quickly and then tested for feasibility and impact — they test early and fail fast.”

Merit in recruitment doesn’t mean what you think it means. That’s McPhee’s assessment of the legislative requirement that has achieved “god” status, according to one deputy secretary cited in the review. Merit “myths” according to the review include:

Recruitment should be about the role and the skills and experience that person brings to the role. Classification is a “backroom assessment” McPhee says, and should neither define the role nor the person best to fill it.

Instead merit can be applied through simplification of the recruitment process. “A rigid approach to recruiting for levels can restrict the applicant pool,” Mcphee writes. And that’s exactly what she doesn’t want for the APS.

With private sector lateral recruits comes a new generation that won’t have the contacts and networks built inside government. McPhee says the APS needs to improve the starter experience and bring employees “into the fold”.

APSJobs.gov.au is likely to go or be significantly overhauled, written off as unfriendly and inflexible. Current advertising is not effective, McPhee claims, as it does not reflect the type of work today’s employees want and does not encourage potential applicants to apply.

The review also attacks the inappropriate use of redundancies — pointing out that voluntary rounds often mean the best talent who are most confident of finding another job put up their hands — and probation periods, which almost never result in a separation in the APS.

McPhee’s review also suggests legislative change to create the concept of a “blame-free separation”, which it argues could reduce the use of voluntary redundancies, and in a rather utopian vision from an employer’s point of view, argues:

“In addition to legislative amendments, the APS needs a cultural shift so that separation becomes an accepted part of continuous workforce renewal, and is respectful and blameless, where appropriate. Separations are conducted in a reasonable timeframe and employees exit as ambassadors for their agency, not as an aggrieved party.”

The Digital Transformation Office’s approach of not seeking detailed applications but asking for expressions of interest outlining the applicant’s areas of expertise was an alternative endorsed by the report. The DTO has done away with the formal, rigidly structured selection criteria that needs a publication (Cracking the Code) to explain to outsiders.

The DTO’s other significant shift is accepting that the most valuable talent won’t be seeking a job for life, but instead would prefer a contract for either a short project or just a few years.

The hope is, if the APS keeps challenging them with interesting work, the best talent won’t be averse to taking on new opportunities. And if they don’t work out, the APS isn’t lumbered with dead weight until they’re forced out via redundancy.

There was something missing from the McPhee review and I could not place it…until I did a word search for “public interest”.

Mcphee evidently missed a fundamental underpinning of the public service.

“The APS is facing vigorous competition from the private sector.” To do what, exactly?