The Western Australian government is asking 54 agencies to cut back on spending in the hope of stretching declining state revenue as far as it can go, but it prefers individual reviews to across-the-board efficiency dividends.

Last Thursday’s WA budget also replaced a hiring freeze with a wage freeze. Public sector bodies can start recruiting again but all positions will be subject to a 1.5% cap on wage rises, which the government expects to save about $826 million over the next four years.

The two-stage agency expenditure review process aims to “ensure that as circumstances change over time, the programs delivered by agencies remain a government priority and continue to be delivered in an efficient and effective manner” according to the budget papers, which project the state’s largest ever operating deficit. WA Treasury claims the process is more discriminating than the federal government’s demands for a uniform 2.5% pound of flesh from nearly every entity:

“The AER model of review drives a critical examination and re-definition of the entirety of an agency’s programs. It seeks to reform program delivery by agencies rather than being a blunt ‘efficiency dividend’.”

Programs face the axe under WA’s AER model if it is deemed they could be delivered in a substantially cheaper way, if they overlap with other state or federal programs or activities of non-government organisations, if they could be scaled back, or are simply no longer a priority.

However all agencies that go through AERs are “required to identify program specific savings measures that achieve a 3.5% reduction in cash appropriation funding” with some exceptions detailed in the budget.

The announcement of AERs across 54 agencies extends the process to almost every entity in the WA public sector. Western Australia Police, the Department for Child Protection and Family Support and agencies with annual savings of less than $50,000 are exempt.

Seeking to head off critics of the mining state’s deteriorating fiscal position, Treasurer Mike Nahan (pictured) talked up “major corrective measures to control growth in spending” which the government had already implemented over the past three years.

Nahan said the recruitment freeze and past restraint on public sector wages had allowed WA to “avoid the large scale redundancy programs that have occurred in other jurisdictions”. Salary growth over 2015-16 was 3.5% — the lowest rate in 17 years.

“Significantly, we have announced $25.4 billion in general government sector revenue and recurrent savings measures since coming to office in 2008,” the Treasurer said. “This is almost equivalent to total forecast general government revenue in 2016-17.”

The new 1.5% cap on public sector pay rises, first announced in late February, applies to all new enterprise agreements from July 1, meaning prison officers feel its impact first. The government says it is “firmly committed” to its wages policy and that individual agency budgets reflect the expected savings. Treasury warns:

“The cost of any arbitrated outcomes above 1.5% per annum will need to be met from within agencies’ existing approved salaries budgets.”

And public servants in WA, the government argues, have been on a pretty good wicket over recent years compared to other state bureaucrats:

“Since 2004-05 public servants’ salaries have grown well in excess of the growth in the Consumer Price Index (CPI). …

“While the previous CPI-based wages policy reduced the rate of growth in salaries closer to the average of the other States, it has not addressed the relatively high base level of salaries. For example, in November 2015 (the latest available data) average weekly earnings for Western Australian public sector workers were $130 or 8% higher than Queensland’s public sector workers.” 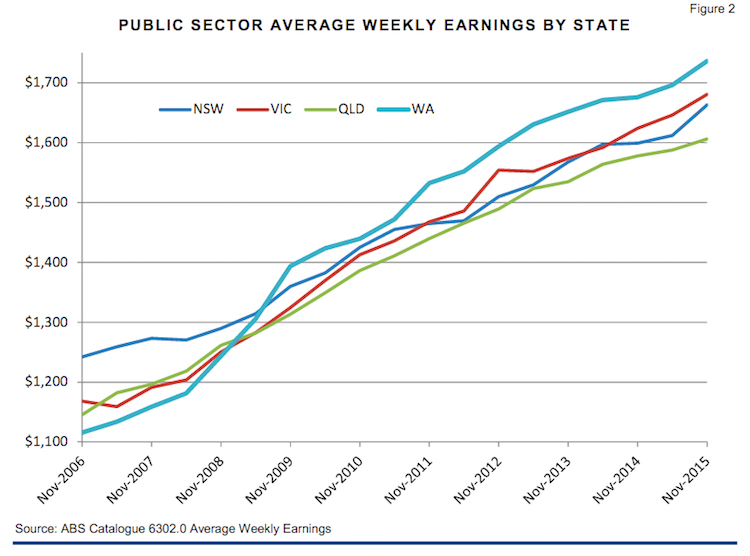