More than 60% of millennial mums use Pinterest, making it a platform perfect for agencies looking to communicate topics related to children and women’s health. And perhaps contrary to popular belief, it goes beyond a female audience.

Last summer, Kids.Gov — the United States’ web portal for younger Americans — revamped its presence on Pinterest in an attempt to find new ways to connect with its followers. Here’s what they found:

Kids.gov is the front door for government information to teachers, parents and kids alike. We launched a Pinterest account for Kids.gov in 2013, but because of limited resources, we weren’t able to be as active and engaged on the platform as we would have liked to be. We know the Kids.gov target audience (parents and teachers) is very active on Pinterest, so about a month ago, we decided to take another look at our strategy. And now, we’re engaging on this platform in a more structured and strategic way.

We’ve focused our Kids.gov Pinterest account on sharing some of the best resources from across government on education, health and activities for children. We’re focusing on sharing a mix of original content, while re-pinning great content from other agencies.

The marketing team set out to learn more about our audiences and the kind of content they like. Despite being a difficult platform to navigate, we set lofty goals for ourselves and developed a timely strategy to pin every day. 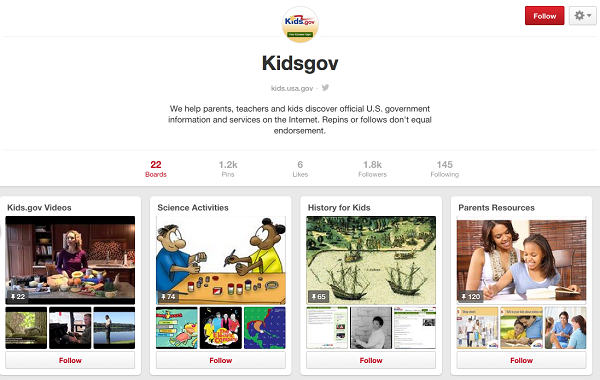 Twelve months later, our metrics are up and we correctly calculated that a shift to educational content would be key. However, Pinterest is still a challenge to predict. Unlike Twitter and Facebook, it’s difficult to identify trends. Despite all that, we have seen substantial growth in followers and content consumption, even taking into account our ambitious goals.

Perhaps the biggest lesson came from one of our early predictions. Like with other Kids.gov social media accounts, summer is the low season. Fewer teachers look for educational resources when there’s no school. By adapting our content by season, we were able to provide timely information to our followers. During summer break when kids were off from school, we focused on parents and caretakers. Once the fall arrived, we switched back to educational content for schools and teachers. This strategy was key to our success. Here are a few other things we picked up along the way:

Our hope moving forward is to learn more about the Pinterest audience and begin to predict certain topics and when they will be popular. Pinterest is still a challenge to our marketing team, but one we gladly approach and look forward to understanding.

Edgardo Morales and Phat Nguyen are members of the USAGov marketing team.