Rapid progress on digital transformation has been made by most governments across Australia since 2015. But jurisdictions have been progressing at different rates and pursuing unique initiatives.

Australia’s experience has largely followed the trajectory of international leaders, including the United Kingdom and New Zealand. At the federal level, the Digital Transformation Office, has borrowed extensively from the UK’s Digital Government Service Office to pursue its digital reform.

The majority of the digital transformation projects at the federal level have been modelled on GDS initiatives in the UK, including a citizen facing GOV.AU publishing platform — Australia’s version of the UK’s GOV.UK — which intends to consolidate government information and services in one place, a digital identity solution, and a digital marketplace to improve the number of procurement opportunities available to business.

The DTO has also embraced ideas from other recognised international leaders, including Estonia, Israel and South Korea, which along with the UK and New Zealand are all members of the Digital 5.

At the state and territory level some jurisdictions have also looked to the UK, but also onshore, for best practice, embracing digital transformation as a means of improving service delivery and making savings in operational expenditure.

Clear leaders have begun to emerge on Intermedium’s Digital Government Readiness Indicator, which rates the preparedness of each jurisdiction in delivering citizen-centric digital services. 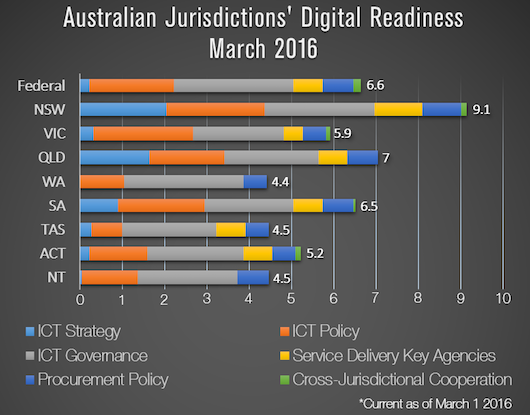 New South Wales is the current front-runner, with its customer service agency Service NSW providing customers with online access to more than 800 transactions. The agency also launched the “tell us once” MyServiceNSW digital account in February to support Premier Mike Baird’s plan to have 70% of citizen transactions conducted online by 2018-19.

In addition, the state is now looking to transition 123 license types to digital format and for a whole-of-government payment services platform.

Service NSW has become the model for the provision of digital services, and is likely to be influential in the planning and development phases of Service Victoria. After receiving an $81 million injection of funding in the 2016-17 state budget, Victoria’s Department of Premier and Cabinet will now move to the next phase of Service Victoria’s implementation, including new systems and digital platforms.

South Australia is also looking to introduce a digital pass with the goal of licences being cash-less and card-less by 2020. It has emphasised citizen-facing digital service delivery since replacing its CIO role with a whole-of-government director for digital services.

Western Australia was a digital transformation latecomer until the release of its ICT strategy, Digital WA, earlier this year. It has managed to skip several stages by adopting and innovating on strategies that have been successful in other jurisdictions.

It plans for many of its projects to be completed in 2018, including the introduction of a publicly accessible government ICT dashboard to monitor the progress of major projects, much like Queensland — a pioneer when it introduced its dashboard in 2013.

Queensland’s strong ICT record was furthered in May, with the refresh of its ICT Modernisation Plan, calling for a more systematic approach to transitioning to as-a-service and cloud solutions, as well as procurement reform and ICT skills growth within the public service.

Intermedium’s half-day conference series — Digital Transformation: How Far, How Fast, How Much? — will explore the next steps in the digital transformation journey. Conference attendees will receive exclusive early access to the latest update of Intermedium’s Digital Government Readiness Indicator.