A new global benchmarking report shows Australia’s doing OK in terms of the overall wellbeing of its people, based on the premise that overall economic growth is too simplistic to measure a nation’s advancement.

This comes as federal agencies were praised yesterday for their work on improving financial inclusions in Aboriginal and Torres Strait Islander communities.

Trickle-down economics is falling out of favour. No longer is it good enough to assure citizens that national GDP is like a pie, and as long it keeps getting bigger, so will everyone’s slice. Inclusive and sustainable growth is now a much more common aim.

Financial inclusion is a key theme in the Boston Consulting Group’s 2016 Sustainable Economic Development Assessment, released today, which opens with a stirring passage on global inequality from social entrepreneur Muhammad Yunus, whose work on microcredit and microfinance schemes earned him a Nobel Peace Prize:

“It is possible to wipe poverty from the face of the earth. But to eradicate this scourge, we must fundamentally change the scope of our effort to include a redesign of the entire financial system.

“We cannot eliminate poverty and elevate well-being around the world if we do not address the fact that 2.5 billion people are completely cut out of the financial system. In its current form, this system facilitates the concentration of wealth in fewer and fewer hands.”

The world-wide consulting firm’s SEDA scores for national wellbeing are made up of ten individual measures divided into three categories: economics, investments and sustainability.

Australia finds itself in the “good but losing ground” category, along with most other comparable rich countries. This is determined by combining Australia’s fairly high current SEDA score of 87.9 with its “recent progress” score of 40.9, which is based on change in the annual data between 2006 and 2014 in this year’s report.

Australia’s wealth-to-wellbeing coefficient is 1.07, meaning our overall wellbeing is slightly higher than BCG’s researchers suggest we should expect based on our GDP.

Our growth-to-wellbeing coefficient, on the other hand, is 0.92. This goes with the suggestion that we are “losing ground” in terms of wellbeing, along with many other developed countries. A coefficient below 1 indicates the recent growth in our overall SEDA score has been below what is expected based on our GDP growth in the same period.

Breaking our SEDA score down, Australia gets 87.5 for economics, 83 for investments and 76.3 on sustainability. Recent progress has been sluggish for economics and investments, rating only 36.7 and 30.7 respectively, but a 52.2 indicates things aren’t sliding backwards as much in the sustainability category. 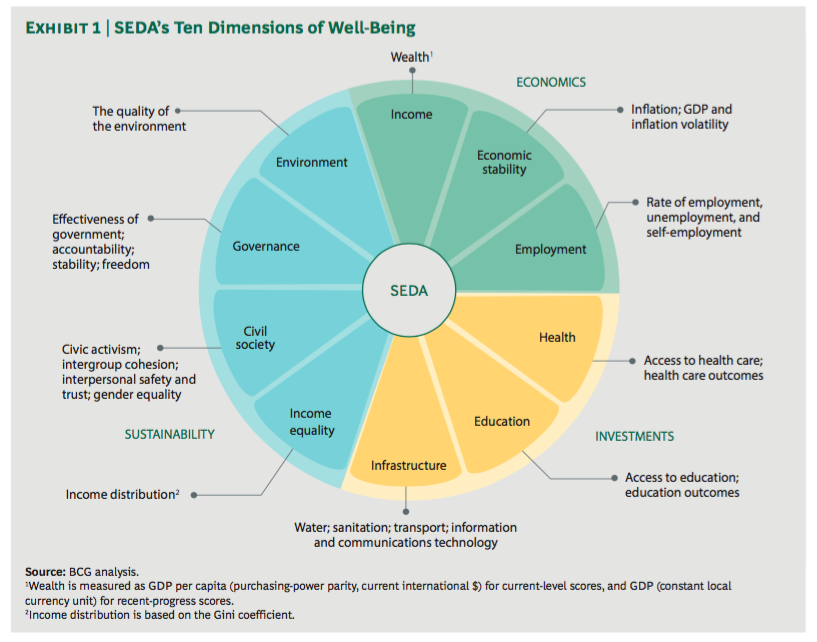 Yesterday, the federal government’s anti money laundering agency AUSTRAC won praise from the First Nations Foundation and the Financial Services Council for contributing to raising financial inclusion in indigenous communities by providing clarity to the financial sector around acceptable ways for indigenous people to prove their identity.

Both organisations have been lobbying for a couple of years for changes to AUSTRAC’s guidelines that would allow firms to “better identify and engage with indigenous Australians” according to a joint statement. FSC director Andrew Bragg says the goal is to boost financial inclusion:

“The present law prevents financial institutions from taking cultural factors into account when legally identifying and engaging with the first Australians. This issue is particularly pronounced in remote communities where drivers licences and passports can be extremely rare.”

First Nations Council chief Amanda Young says some of the issues are cultural practices that require name changes, arbitrary dates of birth assigned to people whose true birth date isn’t known, and even names that are difficult to spell. She says a new guidance note from AUSTRAC has specifically addressed how these kinds of challenges around proof of identity can be overcome.

The agency’s advice “paves the way for financial institutions to facilitate greater financial access to Aboriginal and/or Torres Strait Islander communities” according to the joint statement:

“Many Indigenous Australians who share a name with a deceased person often subsequently change their name. Without official identification, such as a passport or drivers’ license, verification of the new name becomes challenging for financial institutions and hampers the payment of insurance claims or superannuation to beneficiaries.

For such a situation, the Guidance approves processes of verification based on reference letters by an acceptable referee, such as a doctor.”

AUSTRAC has confirmed indigenous community cards are also acceptable ID and given the industry confidence to accept the same verification processes to set up bank accounts, superannuation accounts and insurance policies.