Although it hasn’t signed off on anything yet, the state government is in talks with social service providers, potential partners and investors to determine how best to go about setting up SIBs to tackle these issues.

The announcement that Victoria has released its first social impact bond Statement of Opportunities comes soon after the Community and Public Sector Union Victoria told The Mandarin it had lobbied the Victorian Treasurer against trialing the model that critics are calling part of a back-door privatisation.

Social impact bonds are a form of outcomes-based contracting for social services seen by many as a promising way of incentivising a more rigorous focus on outcomes in some of our most intractible social problems. The key feature is a commitment by government to paying a third-party provider a fee if it is able to meet social outcome targets at the end of a multi-year period. There have been 60 social impact bonds launched worldwide since the first in 2010, with around half in the United Kingdom, 10 in the United States and two in New South Wales.

Jeremy Nott, social policy director at the Department of Treasury and Finance gave a project briefing this week stating “the global experience has been generally positive so far”, while acknowledging some have not produced the outcomes intended.

Why SIBs in Victoria?

The SIBs will complement current programs and services and will not replace existing services, says the government.

Data is a “big challenge”, Nott noted — there are a host of data considerations in making SIBs work, such as defining the outcomes on which contracts will be based and making sure they are aligned with genuine progress, needing sufficient baseline data to measure improvements accurately and setting up the control group correctly. 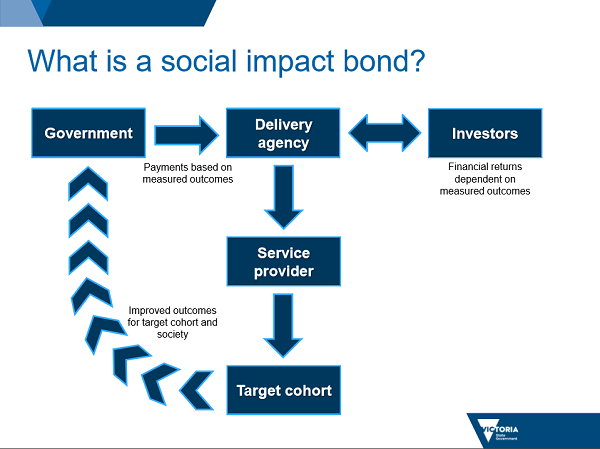 It’s hoped social impact bonds can be an effective tool for tackling these expensive social problems. Around 600-700 people aged 16-18 transition from out-of-home care into independent living each year in Victoria. They face poorer outcomes than other young people, particularly in areas such as unemployment, homelessness and contact with the justice system.

Apart from not allowing them to lead the lives they otherwise could, this social disadvantage is expensive — one study estimated their cost to police per person per year is $7156. For Justice and Correctional Services it’s $6913. There are undoubtedly other costs, direct and otherwise.

Alcohol and other drugs likewise have high direct costs to government — the prison system spends about $300 per prisoner per day on reducing harmful use, for example; for the courts it’s around $2700 per case finalisation. About 4% of all emergency department presentations included alcohol and other drugs as a factor in 2012-13.

The new SIBs will include “robust” systems to measure and evaluate outcomes.

As part of the 2016-17 Victorian Budget, $700,000 was provided to help to deliver market testing and the procurement phases of Victoria’s first SIBs.

Formal engagement on creating the first Victorian SIBs has begun, but initial negotiations tend to be time intensive, so it will take a while until programs are underway. The government is planning two workshops in August, requests for proposal in October, and the joint development and contract development phase to occur in early 2017. Queries can be made to the SIB project team via socialimpactbonds@dtf.vic.gov.au.

A report covering a range of issues learned from SIBs around the world, Social impact bonds: the early years, was published by UK-based Social Finance earlier this month.