Only 17% of those surveyed saw “public service” as a broadly unethical sector, answering that it was either somewhat or very unethical. In contrast, 16% think “government” is very unethical and 26% rate it as somewhat unethical.

At the positive end, public service was rated somewhat ethical by about 38% and very ethical by another 12%, while 33% of respondents chose to sit on the fence. A combined 17% felt that people who work for governments in general were somewhat or very unethical.

Putting it all together, the survey gives public service an overall net score of 34 on the ethics index, coming fourth behind professional membership bodies, charities and not-for-profits, and the health and education sectors.

“Government” as a broad sector appears further down the list on minus-10, although it still managed to get ticks in the two positive categories from 33% of people surveyed. 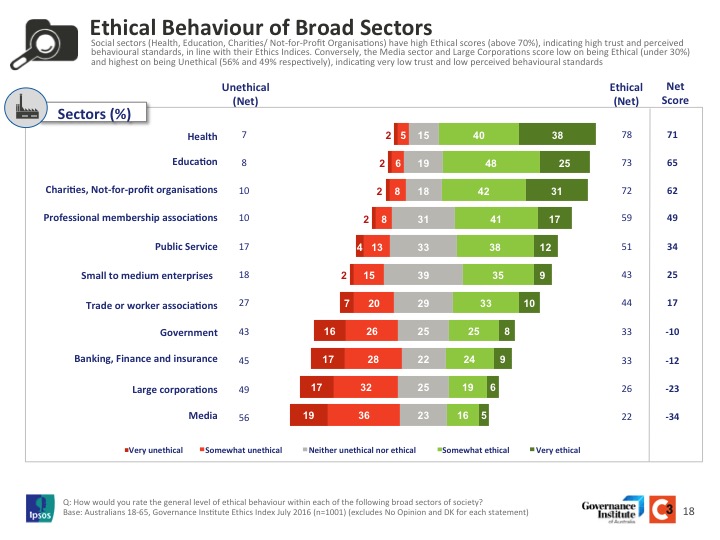 The Governance Institute commissioned Ipsos Research to run a “statistically robust” survey of 1000 people to inform the Ethics Index, and is keeping the full results among its members at this stage. It found governments are “held to the highest expectation of ethical behaviour” by the public but political leaders are a constant let-down, their perceived lack of ethics coming in “sharp contrast” to the way most people think it should be.

Looking deeper into the public sector, an equally unsurprising result is that firefighters and paramedics topped the list of public sector occupations, with net scores of 84 and 83 respectively. Police are in third place on 54, ahead of all the other public servants — grouped together by level of government — by a large margin.

State public servants score 16 overall, with approximately 23% rating them as somewhat or very unethical, 39% voting either somewhat or very ethical, and about 38% choosing not to express a view either way.

The feds came in next and scored 8 when the numbers were put together; 35% cast their votes on the ethical side and 27% suspected Commonwealth bureaucrats of being somewhat or very unethical.

Local council public servants came next with an overall rating of 7 and this result showed less fence sitters than the question about the Commonwealth, with higher scores at both the ethical and unethical ends of the spectrum. This is also an interesting result given local governments often rate the highest of the three tiers on surveys that try to gauge public trust in government.

Then the numbers turn negative as the views about ethics among politicians appear at the bottom of the list. Local government’s overall tally comes out at minus-20, while federal and state legislators are neck and neck on minus-33, perceived by Australians as the two least ethical occupations. 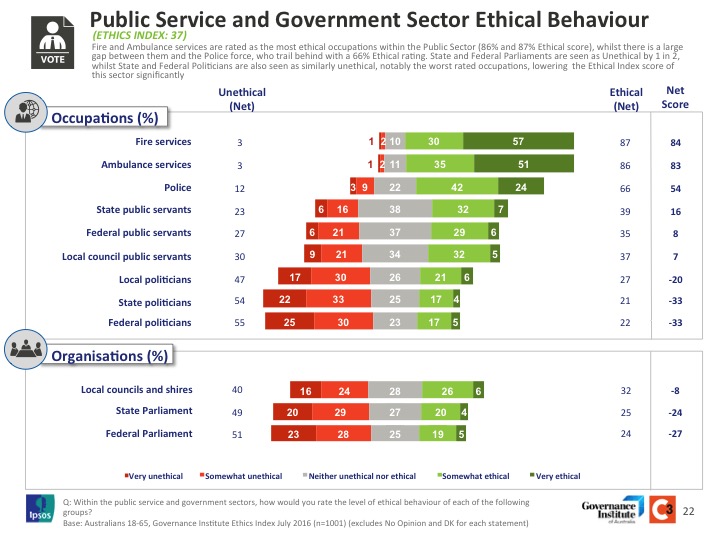 As institutions, local governments win again with a total ethics index score of minus-8 while state and federal parliaments compete again for the wooden spoon, on minus-24 and minus-27 respectively.

The survey also found the public perceives an ethics problem among chairs, CEOs and senior executives, according to the GIA, and sees these key decision-makers as the most important “gatekeepers” who influence an organisation’s ethics.

While the “tone from the top” set by directors and senior executives is seen as the most important factor, government regulatory activities are also rated as a strong influence on ethics. And, the GIA says, whistleblowers are considered “an essential element in driving ethical behaviour” by about 80% of respondents.

The survey suggests Australians have a strong common understanding of ethics, as 97% agreed with one of three orthodox definitions from the Oxford dictionary, the Markkula Centre for Applied Ethics and 2006 book The Thinkers Guide to Ethical Reasoning. Ethics was considered important or very important by 84%.