Who remembers that the 2007 election was the “MySpace election”? In 2016, the election battle was fought on Facebook, Twitter and even on Weibo.

Of course, TV and radio are still the main players. But over the last decade we have seen a gradual reduction in the market share of broadcast media, together with an explosion of new digital platforms.

Just as these are transforming markets, they are also transforming politics and public policy. Political actors are able to communicate and organise peer-to-peer — not just through large organisations.

As a result, our politics will have more in common with the pre-broadcast world that existed in the early decades of federation. How will this manifest?

1. A declining share of the vote for the major parties and more complex Parliaments 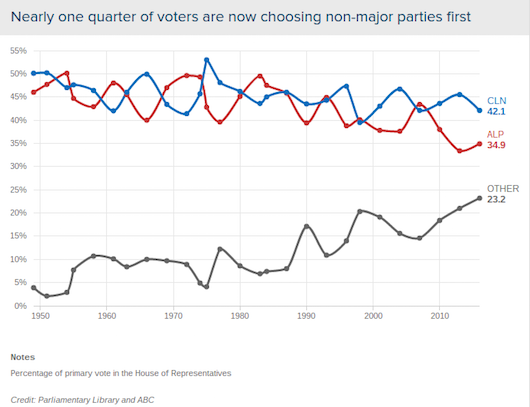 The major parties are becoming increasingly reliant on preferences to get elected. In 2004, 89 of the 150 seats in the House of Representatives were decided on first preference votes. In 2016, that number was just 48.

It also increases the likelihood of:

It will also increase minor party representation in the Senate. The likelihood of a Senate majority is probably now gone. Despite changing electoral law to make it harder for them, the number of crossbenchers has increased to 20.

As a result, governments will have to negotiate their agenda through one or both houses of the Parliament. The idea of a government with a clear mandate is becoming increasingly irrelevant. It’s a simple product of their vote share.

And with digital technology and social media, it’s never been easier to bring together the 7-8% of the community to give yourself a real chance of election in the Senate.

2. The rise of non-party issue based campaigns and campaign organisations

The ability to organise has moved beyond the major political parties and institutions, like the employers and trade union movements.

On the Left, organisations like GetUp! are playing an increasingly important role. On the Right, Senator Cory Bernardi is trying to create his own for Australian conservatives.

Constituencies that previously wouldn’t have spoken can now find common ground and can organise. For example, the Lock the Gate lobby has united farmers, regional communities, shareholders and inner-city environmental activists.

And crowdsourced funding and the lower barriers to entry of digital campaigning put them on a more level playing field with existing interests.

The policy space is becoming more contested. Academics, think tanks, policy and management consultants, lobbyists and lobby groups are generating policy ideas and campaigning harder for them. Access to new ideas and campaigns are global but can be targeted locally.

Increasingly, public servants are being asked to implement policies devised by others and with the help of others. The ability to curate these competing ideas and manage complex stakeholders will become an ever more valued skill for public servants.

And given the ability to “google” your own facts, finding common ground on what the problem is, let alone the solution, is more difficult than ever before.

So what is the answer?

In short, good policy begets good politics. Citizens are much more likely to respect outcomes, even those they don’t support, if: