Evaluation is the path to better outcomes in education, advises the Productivity Commission in a draft report released on Tuesday.

But first, Australian governments must strengthen “the capability to identify and evaluate the policies, programs and teaching practices that work best, for whom and in what circumstances,” according to the PC.

Plenty of data is collected but the inquiry found it could be put to much better use. Some schools clearly do better than others and commissioner Jonathan Coppel says the secrets of their success need to be shared more widely through a new compact between state and federal education authorities.

Collaboration across the federation is a big part of the answer, according to the draft report, which advocates the creation of a “national evidence base” that is far more than a simple national data collection. It should connect the four stages of monitoring, evaluation, reporting and application to inform decision-making at all levels of the education system. A handy infographic explains the difference between data and actionable information: 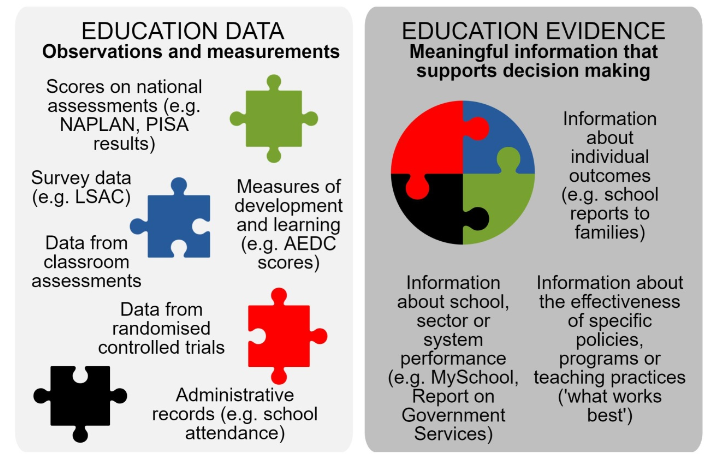 The report notes that Australia and other developed nations have tried to improve education outcomes with increased investment and “reforms focused on monitoring, performance benchmarking and reporting against national standards” but this generally hasn’t had the desired effect:

“There is a growing consensus that increased resourcing and an accountability focus, alone, are insufficient to achieve gains in education outcomes. Adopting and applying an evidence-based approach to education policy and teaching practices is what drives a better allocation of resources and improved outcomes.”

Recurrent spending on education increased 24% in real terms between 2004-05 and 2013-14, or almost 14% per student across government and non-government schools, but students aren’t doing any better for it.

“Teachers have the greatest impact on student performance, after accounting for the characteristics of students themselves. Looking within the classroom, particularly teaching practices, is thus paramount to improving education outcomes across all schools and all students.”

The report does not suggest the “top-down” approach of monitoring and benchmarking should be abandoned. It says it should be supplemented with a new “bottom-up capability” to evaluate education policies, programs and teaching practices to find the best ones — as both are “essential and complementary” to each other.

A new Education Agreement between the federal, state and territory governments is also recommended, to define these shared objectives, the nature of the evaluative research, standards of evidence and how the results will be translated into guidelines for schools. The draft recommends asking the Council of Australian Governments Education Council to assign an entity, which would be collectively owned by all eight governments, to oversee the development of the national evidence base and encourage its use by educators and education policymakers.

The report recommends changes to various privacy regimes and the creation of a national “online metadata repository”  to allow more widespread sharing and linking of existing data. Governments should also consider introducing a “national unique school identifier for children” and ask parents for permission to use information more widely at the point of collection, it suggests.

The commissioners feel this potentially valuable information is generally tied up too much due to privacy and ethics concerns, and believe these can sufficiently addressed while making it more widely available. Another recommendation is that new nationwide guidelines should “place the onus on data custodians to share data unless a privacy (or other) exception can be justified”.

Commissioner Julie Abramson said the aim was not to increase the red tape for educators. “In fact, our report makes recommendations for reducing the existing burden by collecting data more cost-effectively and also making better use of existing data,” she said.

The PC is accepting submissions in response to the draft report for a month, until October 7. The final report will be released in December.