The yearly update on Australian Public Service statistics is out, showing an increase of about 3500 full-time employees across an ageing workforce with slowly increasing diversity and a growing proportion of non-ongoing positions.

The 155,771 federal public servants are now 43 years old on average, though the women among them are younger than the men and make up 59% of the total workforce. Women also occupy slightly more Executive Level and Senior Executive Service positions than they did one year ago. The APSC reports:

The minority of male APS employees still hold the majority of senior positions, a picture that looked almost identical in the 2014-15 update:

Indigenous Australians and people with disabilities continue to move towards taking their fair share of APS jobs, too. But as always, it should be noted that employees don’t have to supply information about whether they are disabled, Indigenous or from a non-English speaking background.

“As with any large voluntary data collection,” the Australian Public Service Commission says its APSED data tends to under-represent the number and proportion of these diversity groups:

“The Commission continues to work with agencies to increase the number of employees that provide their diversity data to their agency, and to improve the quality of data provided by agencies to APSED. There have been some improvements, however the overall quality of the data continues to be poor and there are a number of agencies that still provide little or no data about the diversity status of their employees.”

The data they do have shows a tiny decrease in the percentage of APS staff who did not grow up speaking English. There were tiny increases in the number of Indigenous people (0.2%) and people with disabilities (0.1%) following several years of growth from around 2012 and 2013. 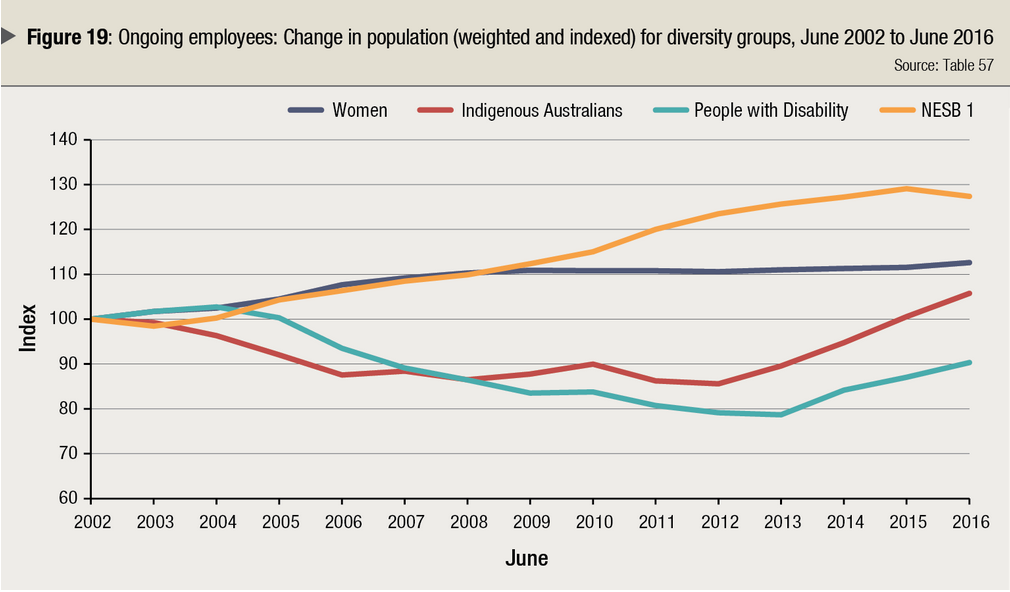 Despite 11,005 ongoing employees being recruited to the APS — the largest number in the past 4 years — the number of non-ongoing roles continues to rise. Public servants without permanent jobs now account for 11.5% of the total, up from 10.3% last time around. 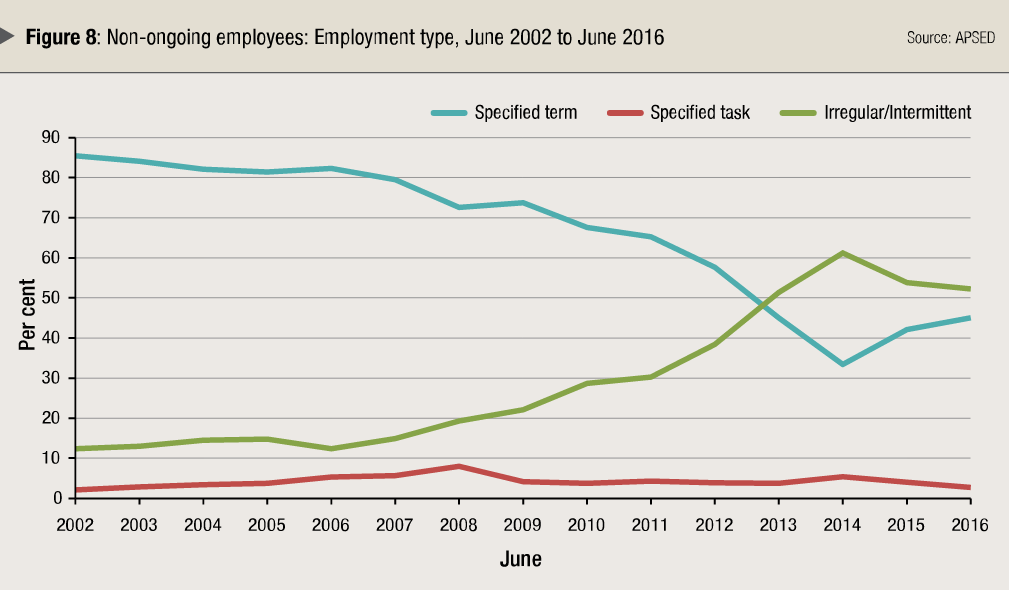 A slight decentralisation is also evident, with the number of Commonwealth public servants located in Canberra dropping over the past year by just under 1% — about 1500 people — so that 62.% of the APS is now based outside the capital. Even though most of the APS is not found in Canberra, most of the managers are — 59.9% of ELs and 72.9% of the SES — and nowhere has more APS offices than the ACT.

A return to trainee positions is revealed, at least in percentage terms, with 512 on the books as of June this year compared to only 213 last year.

There was positive growth in all other classification grades apart from APS1, which has now dropped to 2.5% of the workforce. The top three proportional increases came at opposite ends of the spectrum in the APS 2, APS 3 and SES 1 brackets.

The stats show 144 new jobs were added to the bottom rung of senior executive ranks in the year to June, but only 13 new band-2 positions and 9 more for band 3.

The long-term growth in higher classification levels that has been playing out over more than a decade is still showing some signs of abating, with slight reductions in the proportion of middle management positions — which happened in 2014 for the first time in many years — again this year.

All the staff movements due to 2015-16 machinery-of-government changes, big and small, are detailed in an appendix to the new statistical update.