Made public on Thursday, the DTA’s first roadmap reveals the biggest shift in decades to how technology in government will be delivered, procured and rolled out across all agencies in an attempt to end the proliferation of disparate online interfaces and underlying back-office systems that have increasingly frustrated consumers and businesses alike.

“Changes to existing policy and legislation that blocks change will underpin the success of the transformation.”

At the procurement level, the architectural mandate is also likely to cause a major rethink of the traditional tendering system based on government stipulating requirements to suppliers.

It also involves a major shift to cloud based, software ‘as-a-service’ applications rather than government building bespoke systems that have persistently blown budgets, run years late and locked agencies to dependency on inflexible legacy systems.

The latest plans for the first time reveal key details around the DTA’s intentions following the transfer of control from the Department of Finance for more than $5 billion a year on federal technology purchasing.

They also lay the structural foundations for the centralisation of control over policy and strategy surrounding online delivery of government services, government use of data and broader technology deployment and development, including industry participation.

Building on the user-centric design values of predecessor the Digital Transformation Office, the document spells out an imperative for interfaces that mirror how citizens, businesses and stakeholders interact in the real world rather than making them conform to government processes.

Meanwhile, the DTA is currently advertising for a permanent chief executive officer to take charge of the new plan; applications close on January 15.

The head and shoulders of the wider transformation project groups key delivery areas into five distinct communities based on users, transactional interactions and the agencies that facilitate them.

Although yet to be formally outlined, The Mandarin understands the new groups now consist of:

Another major development is the release of what amounts to the Commonwealth’s first high-level service and information architecture diagram that sets out the mechanics of how digital transformation is mandated and delivered. It looks like this: 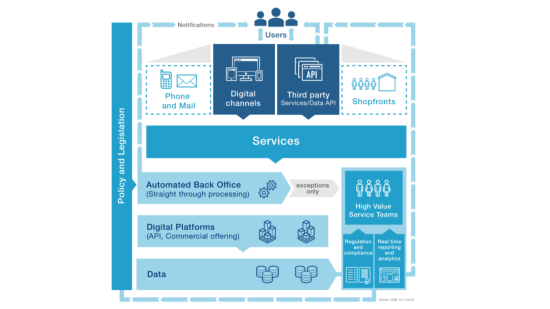 A highly significant inclusion is the mandate for commoditised back-office automation using established transactional systems including ‘straight through processing’ commonly used by banks and other large electronic transactors. The DTA roadmap says:

The publication of the architecture diagram is of crucial importance to the government’s technology suppliers because it conveys, in general terms, which solutions will be entertained and which won’t. The architecture’s mission statement goes like this:

At the front, there is a layer of services that make it easy for users to get things done with government, through whichever channels they need.

Behind the user-facing services, there’s a highly automated back office that eliminates almost all manual processing and case management, which in turn means there are no unnecessarily bespoke systems. This frees up qualified staff to deal with complex and difficult challenges.

Supporting the services and back office are digital platforms providing highly commoditised functions, like taking payments and providing notifications. These platforms are highly-scalable, providing simple, common, non-business-specific services. They are ultimately disposable, accessed via a simple government API to access the underlying infrastructure, commercially provided and able to be switched out as needed.

All of these layers are underpinned by a strong foundation of well-structured data. This will make it possible to have real-time performance reporting, allowing government to measure and continuously improve services and enhance regulatory and compliance activities.

But here’s the kicker:

Changes to existing policy and legislation that blocks change will underpin the success of the transformation.

Put crudely, many agencies will now be shopping at the supermarket for their everyday systems consumables, like payroll, accounts, document management or other common applications, rather than having them custom-built. 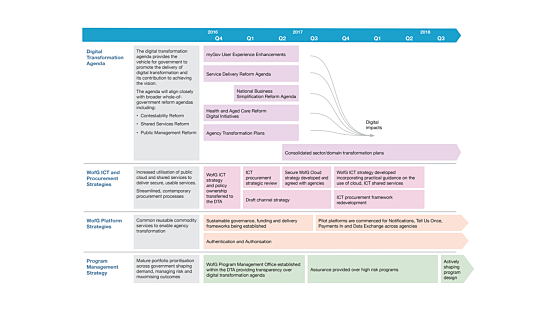 Agencies secretly hoping for another architecture diagram and delivery plan that fades away as the years go by (think Gershon Review) are not being cut any slack.

A whole-of-government IT strategy including cloud and shared services is set down for completion by the middle of the second quarter of 2018, running concurrently with an “ICT procurement framework redevelopment”.

Those targets mean that both industry and agencies will have just 18 months to recast their technology strategies, with a clear implicit expectation of driving up efficiency through automation and cutting down on technology procurement costs.

While there are no dollar figures contained in the DTA manifesto in terms of savings, banks including the Commonwealth Bank of Australia have previously cited the need to flip the ratio of spend between “lights-on” or business and strategic projects and innovation from 80:20 to 20:80.

Equally as important, the shift from over 20 transformation projects to the five key areas of development starts in the second quarter of 2017, putting major projects at Human Services, Tax and other large agencies on immediate notice.

Meanwhile, a rehabilitated myGov has emerged as the first tangible public ‘sell’ of the DTA’s grand plan, having spent the last six months in a kind of user experience rehabilitation clinic. The signs of improved interface behaviour for myGov are now promising enough for ministers to be seen in public with it.

Addressing DTA staff in Canberra on Thursday, Assistant Minister for Cities and Digital Transformation Angus Taylor and Minister for Human Services Alan Tudge promised a raft of new improvements to the often-criticised online access credential, all to be delivered within six months.

The DTA’s heavy focus on myGov, especially cementing a more productive working relationship with its former Human Services custodian, is a strong signal that swiftly improving the usability of government transactional services remains the top deliverable for all agencies following the dissolution of the Digital Transformation Office.

The DTO had been due to deliver an alpha stage prototype of its Digital Identity Framework by the end of 2016. However that project — and much of the language that came with it — has been parked in favour of making “verification” and “authentication” functionality much easier for everyday people to use.

There’s still acknowledgement of the digital identity foray at the DTA, but it’s hardly at the front of the shop window.

A laundry list of incremental improvements recently made to myGov cited by Taylor and Tudge shows demonstrates that  it’s no small task to ease the online frustrations of millions of Australians — many of whom who can withdraw cash from an ATM via SMS, but clearly have trouble logging into their myGov accounts.

More user experience enhancements are on the runway for the next six months.

“In 2017, the myGov platform will be made easier to use on any device, with a simpler design and a guided experience to create and access your account, plus the option to receive updates about transactions on your phone or tablet,” Tudge said.

“Users will also be able to choose simpler log in options that suit their needs while ensuring myGov remains highly secure.”

Maybe not as secure as a completely unmemorable, randomised 10-digit alphanumeric string, but secure enough to lodge basic information the government requires to roll a payment to an account number it already has.