Continued from Part One.

“[T]here is an Australia of the spirit, submerged and not very articulate … [b]orn of the lean loins of the country itself, of the dreams of men who came here to form a new society …. Sardonic, idealist, tongue-tied perhaps, … it has something to contribute to the world. Not emphatically in the arts as yet, but in arenas of action, and in ideas for the creation of that egalitarian democracy that will have to be the basis of all civilised societies in the future.” — Vance Palmer, 1942

The period from the late eighteenth to the first decades of the twentieth century saw the establishment of democratic institutions or the democratisation of existing institutions with debate focusing checks and balances between popular sovereignty — represented by lower houses such as the British House of Commons, the American House of Representatives and Legislative Assemblies in the Australian colonies — and upper houses representing aristocracy and/or the propertied classes — as in the case of the British House of Lords, the American Senate and Australian Legislative Councils.

I both propose and predict that in 21st century we’ll rework this canvass, but where the checks and balances were between popular elections and ‘elites’ of some sort, the new checks and balances will be between the people as represented by election and the people as they were much more commonly represented in ancient Athens by sortition or selection by lot. In the American context the legal scholar Ethan Leib has proposed a “Popular Branch” to join the other three branches in the US constitution.1

Under the model I propose here, the lower house would continue as the seat of government be elected as it is today. However there would be an additional house chosen at random from the Australian population. It could replace the Senate, though for those such as myself who think that on balance the Senate has improved our democracy as a house of review, the ‘people’s chamber’ could simply be added to what we have now. As will be seen, though this could make it harder to get certain things through the parliament, not only will that only occur where the people’s chamber evinces a strong, considered democratic opinion that deviates with the people’s elected representatives, but the new chamber would provide a way of energising the search for policy options long since put in the too hard basket. I’m thinking of questions like tackling obesity, drug addiction and crime and perhaps even nuclear power and genetically modified products in ways that move beyond the moralistic narratives into which electoral politics is forced by the politico-infotainment complex.

I suggest the People’s Chamber comprise an odd number of citizens chosen by lot. I like the number 201 which corresponds to the smallest number of citizens within juries within the tribunal (the Heliaia) in ancient Athens which functioned as a check on the Ecclesia or the Assembly of all citizens and seat of participatory democracy. 2

I also like the idea of this body having some continuity. So contrary to most implementations of sortition, I’d like to see people chosen for substantial terms and would propose six-year, non-renewable terms with 67 appointed every two years. That way you’d have a growing body of citizen’s expertise and ‘old hands’ two and four years into their terms could help newcomers get up to speed. I’d also make acceptance of such a position conditional on some prohibition of such people graduating to traditional (elected) political office for an additional six years after they left the chamber. Anyway, these are obviously details, offered for illustration. They are not integral to the model.

The powers of the people’s chamber

The real interest is in the powers we give such a body, how they relate to other parts of the system and in what circumstances. Until we have more experience, I have previously suggested that a simple majority of the People’s Chamber not have a blocking power. After all with a few hundred people chosen at random, a bare majority may reflect randomness rather than represent any clear views of the people. Thus I’d provide such a body with a delaying power as has the UK’s House of Lords.3 A majority should also enable it to propose legislation. This encourages the rest of the system to take the chamber seriously, but otherwise leaves the status quo largely intact. (It’s interesting to think how the chamber or some other means of selection by lot might also have some involvement in the executive. There’s also some anecdotal and theoretical evidence that selecting some members of the elected chambers by lot would improve the incentives on elected representatives, but I’ll leave discussion of both those matters to another time.)

But consider what it means if a super-majority – say 60% of members of the people’s chamber disagree with the elected house or houses. To me that has the tell-tale signs of political elites obeying the dictates of vox pop democracy, that is their own careers as dictated by their parties and the vested interests that influence them – rather than the considered wishes of the people. Remember, this is over 60 percent of ordinary people, just like you, me or anyone else, who, having informed themselves and deliberated with their peers, have come to disagree with elected representatives despite the prestige, power and resources those enjoying the majority of the lower house enjoy. So I’d want to give them more constitutional power to break any deadlock between their chamber and the other(s).

The first power I’d give them is a subtle, indeed sneaky one. The secret ballot was known in the nineteenth century as the “Australian ballot” after South Australia and Victoria instituted it in 1856 to prevent citizens being intimidated into voting against their will. So it’s fitting that we take the Australian ballot further and use it to loose the bonds of careerist intimidation within our Parliament. I’d give any super-majority of the people’s chamber the power to compel a secret ballot of the other chamber(s) on the matter in question. In fact, a secret ballot isn’t unknown to Parliament today. The Speaker of the House and President of the Senate are elected by secret ballot, and that fact has changed outcomes. 4 If this didn’t resolve the deadlock, I’d use a mechanism like S57 of our constitution uses for resolving a deadlock between the House and the Senate after an election. If, after three months, the deadlock between the houses remained, the matter would be resolved in a joint sitting between them. 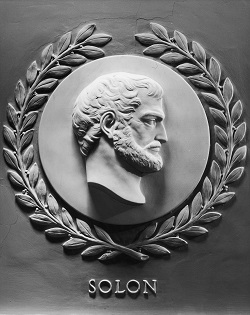 It’s all very well for me to opine about how I’d like to become a modern Solon. The real test I think is whether it is possible to take much smaller steps which would be beneficial in themselves however far they took us towards my lofty goal. I think it is. We simply need to do it for ourselves. I’d like to go hunting for the funds – from philanthropists and from ordinary concerned folk like you and me via crowdfunding – to simply establish a people’s chamber outside our official constitutional institutions.

Operating either at state of federal level, can you imagine a body of – say 101 people chosen at random from the relevant population sitting as a citizen’s chamber? It would be given the resources for some research capacity and to call expert witnesses. One might sit four times a year for nine days – encompassing one week and the weekend on either side of it. Resources would have to be found for at least the airfares to a central location and accommodation, but ideally also for some pay for all that work.

And if that were beyond the resources of a fledgling social movement, a more targeted approach would involve creating the chamber on an ad hoc basis, perhaps to coincide with a looming election, though if I were in England I’d make it an issues based convention – on Brexit. The chamber would deliberate on the choices before the electorate at large in just the way the citizens bodies in Oregon do on specific measures. 5

They would deliberate on the parties’ policies, they would invite spokespeople for those parties or others to address them and help them deliberate on the merits of the choices to be made by the people. They would also, as occurs in Oregon, work on brief communiqués explaining the case for and against various options together with how the body voted on them. It would also be highly instructive if members of the body were asked to identify how they intended to vote at the beginning and the end of the process with the aggregate results also communicated to the public.

I think this could have an electrifying effect on political business as usual. No-go areas such as those I itemised above might start to become more appealing for politicians under cover of strong support from the people’s chamber, but the reckless policies like abolishing carbon pricing and resource rent taxation which were designed not to endure a decade or more in government, but rather to get an Opposition through a radio interview might be much more hazardous for vox pop politicians to propose.

At least that’s what I confidently expect. And if I’m wrong we will have lost very little.

The first essay in this series explored the case for deliberative democracy.

Up next: How can slow democracy be applied in business and government.

Having had the privilege of participating in the First Australian Citizens’ Parliament, convened by the New Democracy Foundation, I am convinced that Nicholas Gruen is right and that a standing citizens’ assembly would lift the quality of public policy in this country enormously. I have written in similar terms, but with the benefit of first hand experience, here https://medium.com/@tidbinbilla/could-accidental-politicians-help-limit-trumpification-of-government-673e8569cf50#.wmvjjqcd2