Most citizens think government service delivery would improve if agencies just used more of the latest technology, according to a survey commissioned by the Australian Information Industry Association, while very few are impressed by the progress of digital government to date.

The AIIA’s new survey, conducted by a commercial research firm, found consistently low confidence in the ability of public sector bodies to use information and communications technology well in service delivery across all three tiers of government — while 99% think more technology in public services would bring benefits to Australians.

Commonwealth agencies had convinced only 16% of respondents to strongly agree that they are “using technology very well to deliver services” while the figure was 14% for state agencies and just 12% for local government, according to today’s statement from the AIIA:

AIIA chief executive Rob Fitzpatrick said government needed to keep pace, and not just because it would make citizens happier.

“The economic benefits from having a digital economy are well known, and there is clear opportunity for government to take the lead and speed up Australia’s digital transformation,” he said. 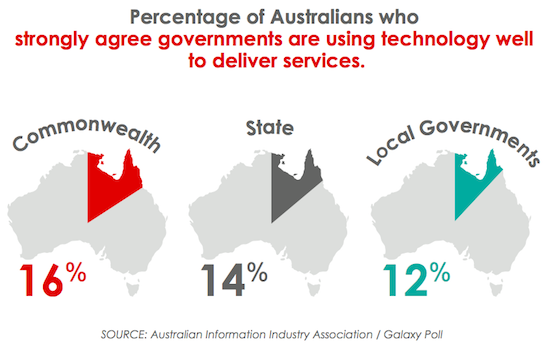 The survey asked people to nominate the main benefit from the public-facing agencies they are most likely to deal with taking up the newest technology and nearly three quarters felt it could be best applied to improve “quality and accuracy” in service delivery.

“What this result says to me is that even though there have been some misfires recently when it comes to execution, such as the Census outages and the Centrelink errors, Australians want the government to progress and improve its use of technology rather than regress back to the ‘old’ way of doing things,” Fitzpatrick said.

Complete automation is not what most people want, however, according to the AIIA, whose survey found 64% of Australians would like a combination of automated channels and customer service staff.

Younger people are more likely to see full automation as the way forward — 19% of generation Y and 13% of generation X — while older demographics still want to speak to a real person. 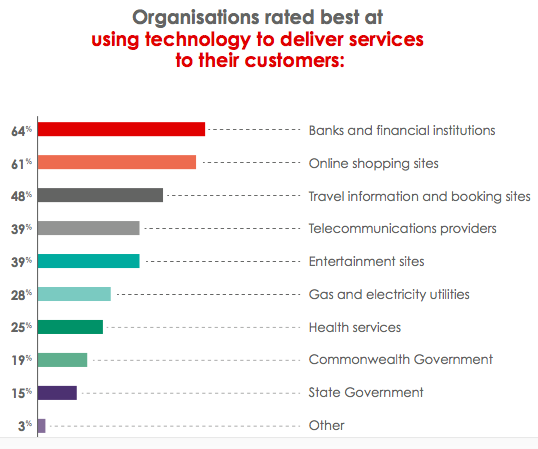 The survey was conducted online during February this year using a representative sample of 1,004 Australians aged 18 or above, with the data weighted by age, gender and region to reflect the latest population estimates.

The AIIA has released the results to promote its Navigating Digital Government Summit in Canberra on April 5, which will look at how advances in artificial intelligence, machine learning, cognitive intelligence, robotics and quantum computing could change government service delivery in the future.

The ICT industry body has secured the yet-to-be announced permanent CEO of the Digital Transformation Agency to give a speech, along with DTA’s first assistant secretary for projects, procurement and assurance, Peter Alexander.