Is “value capture” a wonderful untapped opportunity to fulfil all our infrastructure dreams? Or is it just a new way to sting the taxpayer? Our new report casts a cold, hard gaze over value capture, and finds that it’s a good tax in theory, but will prove very hard to put into practice.

Value capture is the name given to a policy whereby governments capture some of the increased value of land that results from building a new piece of infrastructure. Typically, the money the government “captures” is used to help fund the project.

At first glance, value capture seems marvellously fair, because it applies only to those who benefit from the particular project. So the people of western Sydney do not help fund a new railway station on the North Shore. But look a little closer: it also means that affluent inner-city residents don’t help fund a better railway station in Melbourne’s outer northern suburbs.

Federal ministers from the prime minister down are enthusiastic about value capture and are pushing the states to embrace it. Only last week, Urban Infrastructure Minister Paul Fletcher reiterated that the Commonwealth does not want to be “just an ATM” for the states. But if the federal ministers face up to some home truths, they may find value capture less to their liking.

Value capture is a tax

Home Truth No. 1 is that a value-capture scheme is a tax. That’s how it raises revenue. Politicians tend to shun the “T word”. They prefer to present value capture as an innovative financing mechanism. Sorry, it’s a tax.

Some advocates point to Hong Kong, where a private company builds and operates the rail lines, in return for cheap access to development rights around the new stations — a non-cash subsidy. Yes, integrating new infrastructure with rezoning and other planning changes is a great idea. But a similar model in Australia would have to be much smaller in scale.

That’s because in Hong Kong the government owns all the land. In addition, the city is dramatically denser than Australian cities: more than 7 million people live in a built-up area of around 285 square kilometres, compared with Sydney’s population of about 5 million in around 2,000 square kilometres. In a very dense city, good access to mass transit is highly valued.

Others in the value-capture camp point to tax increment financing (TIF) schemes. These have been used in the US with mixed success.

TIF schemes don’t involve a new tax, or indeed a funding source of any kind. Instead, they are financing schemes that earmark an expected increase in future revenue from existing taxes, such as land taxes, which can be attributed to a new piece of infrastructure. This increase is then used to repay special-purpose bonds.

But TIF schemes are of little value in the Australian context, since Australian governments have strong credit ratings and can borrow at extremely low rates of interest — more cheaply than private sector financiers can. Not only this, but TIF schemes generally do not offload project risk. They may instead come with a hidden government guarantee.

Family home would be captured

Which brings us to Home Truth No. 2: to raise a reasonable amount, a value-capture tax would need to include the family home. Owner-occupied housing accounts for around 65% of total land values in Australia, and increases in its value are taxed very lightly (see the chart below). 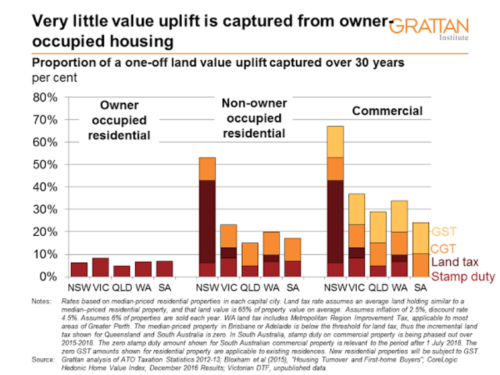 To minimise the distortions value capture could have on the economy, it should be charged on unimproved land value, as a flat proportion of the land-value uplift attributable to the new infrastructure, with no exemptions.

A tricky question of who’s in and who’s out

Home Truth No. 3 is that many taxpayers are likely to feel aggrieved. Property prices go up — and down — for many reasons.

Drawing a boundary around a new piece of infrastructure to distinguish between those who must pay the new tax and those too far away to benefit is bound to involve rough justice.

Also, it won’t be easy for governments to convince people that their new tax bill still leaves them better off. Homeowners get the benefit of the new project on paper, but have to pay the tax bill in cash. Is this sounding like a political nightmare yet?

A way to reduce the political heat

There is, however, a way to implement value capture that could take a bit of the political heat out of individual decisions. Governments could pass general legislation that applies value capture to every transport infrastructure project with certain characteristics:

So, for example, value capture might apply to all urban passenger rail projects costing over A$50 million. The tax might then be levied on all properties within 800 metres (i.e. walking distance) of a new station.

Once such legislation is in place, each value-capture tax may be slightly less politically fraught. This approach will minimise the opportunities for rent-seeking or corruption that arise from designing bespoke schemes for every individual project.

A better answer still could be a broad-based land tax. Such a tax is highly efficient, because land is an immobile tax base (see the chart below). 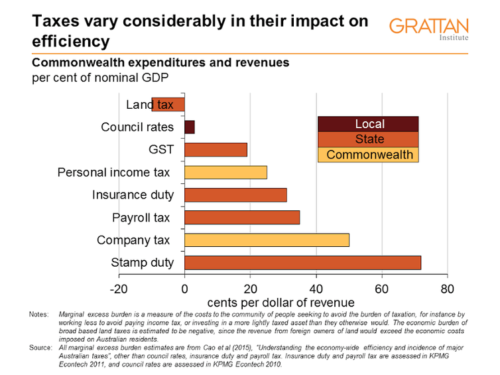 While it would not zero in on the beneficiaries of new infrastructure, a land tax would capture the effects of all infrastructure, old and new, as these translated into land values, making it scrupulously fair. A broad-based land tax would also be simpler to administer than a value-capture tax. That’s because there would be no requirement to police the geographic boundary of the catchment area.

So a broad-based land tax has some distinct advantages over a value-capture tax.

Some will say our conclusions are pessimistic, that a little more creativity could devise a way to design value capture so it painlessly funds public infrastructure. To which we would say: there’s no magic pudding when it comes to public money — the only sources of funding for public infrastructure are user charges or a tax. Value capture may involve taxing beneficiaries more than the general taxpayer, but it’s not a bucket of free money.

Yes, if value capture is done the right way, as a tax that embraces the principles of equity, efficiency and simplicity, it could make a positive contribution to infrastructure funding in Australia. But the truth is, there is nothing easy about capturing value.

This article was originally published on The Conversation.