Forget paleo pear and banana bread. And that video.

When it comes to government agencies and their critical suppliers attracting top-flight graduates into their workforce, the hottest game in town is employer speed dating — and it’s happening at an unprecedented scale and pace.

On a muggy Tuesday night in Sydney, more than 200 maths, science, engineering, computer science and technology grads are piling into the ‘Strangers’ function room in New South Wales Parliament House for ‘Defence Pitch@Parliament’, politely weaving their way past bemused lobbyists and their guests seated for dinner in a room overlooking the Domain.

The grads won’t be strangers for long.

University recruitment days and evenings used to be a sausage sizzle and free can of beer affair (if you made it early enough). Tonight’s function is fully catered with ministerial grade canapes and a fully waited wine service, as industry executives and recruiters press flesh with their quarry.

A collaboration between Ribit (part of CSIRO’s Data61 innovation entity), the NSW Department of Industry, and AMSI Intern, Defence Pitch is the latest in a series of sectoral meet-and-greet events created to forge more direct and lasting connections between local employers and STEM students, who might otherwise be snapped up by foreign companies and move overseas.

Jobs to staunch the brain drain

Aside from staunching a tech skills brain drain, employers including government are vying for future staff to fill vacancies for work that might otherwise have to be sent overseas. It’s a tough market and there are big dollars at stake.

As Defence industry policy is firmly geared towards building greater local participation, states and their industry advocates are now gunning for a slice of more the $195 billion in spending slated to flow over the next 10 years. 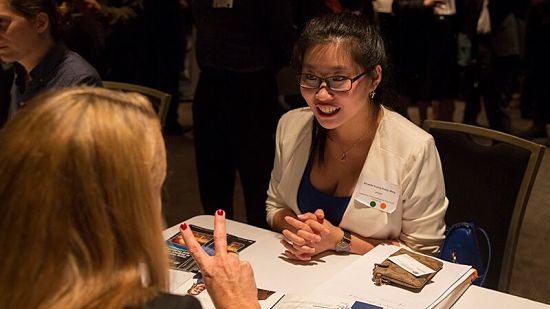 On the floor, the transactional pace of interactions is dizzying.

After a series of rapid fire one minute pitches from defence related employers — like Airbus, ASC, BAE Systems, Boeing, Defence Science and Technology, Raytheon, Rockwell Collins and Thales to name a few — it’s straight down to business with a series of strictly timed five-minute chats, with just a minute to move between tables. 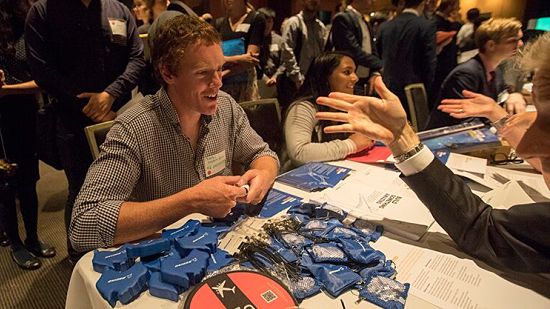 It’s not exactly a straight-laced crowd either, with plenty of man-buns, pony tails and long sleeves covering designer ink you’d be more likely to see on the floor of a JB HiFi store. A small huddle near the Raytheon booth wouldn’t look out of place at a gamer’s convention.

Previous Ribit events have focused on high value industries like FinTech or MedTech, where start-ups are looking for keen, hungry and inquiring minds.

Defence may outwardly be a more structured industry, but as many in the room wryly observe ‘disruption’ has been their core business for years, whether it’s developing encryption, autonomous vehicles or new materials and manufacturing processes that deliver advantages on and off the battlefield.

Addressing the crowd, NSW Government Defence Advocate, Air Marshal (Retd) John Harvey AM is frank about why getting local studens into defence industries at the ground floor is more important than ever, spelling out the need for a “sovereign industry capability.”

Harvey, an ex-fighter pilot, says it’s about “developing what we need so we don’t need support from other people”. Put less diplomatically, that translates to Australia developing sufficient defence industry capacity to minimise the risk of reliance on overseas suppliers and keeping really sensitive smarts safe and at home.

“It’s a very smart move your being here,” Harvey tells the students.

Ribit on the hop

Ribit’s matchmaker-in-chief, Liz Jakubowski, presses the state’s home advantage hard to the crowd, noting that the NSW government has grabbed the opportunity of becoming Australia’s premier defence technology development destination with both hands to make it a “cradle of innovation” aided by a pipeline of around 10,000 students participating in the Ribit scheme.

Around 20% of that community are women, an encouraging figure in what has traditionally been a highly male-dominated industry. On the floor of the event it feels more like 30%, and after the formalities there’s some inter-student interest beyond career development.

More than a job…

From employers, the pitches that seem to hit the mark with students are the ones that come from people with long and varied careers around the military.

“Defence will invest more in education than any other company. It’s a great way to get a free education”

Mark Petrusma, chief of Defence Science and Technology’s Science Partnerships and Engagement Division, stresses that in his organisation “we create careers, not jobs”.

In typical ex-army directness, a representative from Rheinmetall (they make integrated military vehicle, truck, tank and weapons systems) cuts to the chase.

“Defence will invest more in education than any other company. It’s a great way to get a free education,” he says.

Yes, it is rocket science

Not to be outdone, managing director of Rockwell Collins Australia Nick Gibbs is talking up the company’s pedigree in rocket science.

“‘One small step for [a] man, one giant leap for mankind’ — those words were communicated on Rockwell Collins equipment,” Gibbs says.

“When you work for Boeing, the sky is not the limit,” he quips, adding that the company holds some of the largest and most complex defence contracts in the world.

Geoff Stephens, head of systems and software for SAAB Australia, tries to keep it real.

“We no longer make cars, instead we muck around with fighter jets,” Stephens says.

Beyond the bear pit

By the time two NSW ministers take leave from the bear pit to take to the stage there isn’t a whole lot left to say, other than to emphasise their support in cash and kind. NSW Minister for Trade and Industry Niall Blair prosecutes the position that NSW is and will continue to be “a defence state” that intends to chip in and continue to build the industry.

That included investing more in STEM, such as $50 million for new science labs in state schools, Blair said.

Blair’s predecessor in the Industry portfolio — Anthony Roberts, who is now NSW Minister for Planning, Housing, Special Minister of State and Leader of the House — also managed to make an appearance, telling graduates that “tonight careers will be made”.

“You may not remember my words, but you will remember a government committed to defence industry,” Roberts says.

By the end of the night one of the industry staffers heading a table lets out a long, deep breath.

“I’m exhausted,” she says. “We were doing two [grads] at a time, it was the only way.” Asked whether the exercise was worthwhile, she looks down at a thick clutch of papers.