Most of the costliest internal fraud against federal agencies involves public servants fudging and falsifying documents or misusing IT systems to bump up their take-home pay and entitlements or to simply steal money, according to a recent report from the Commonwealth’s criminologists.

Nearly all the public sector employees who committed the most costly frauds against their employers between 2010 and 2014 did so on their own, and had almost always been on the payroll for several years before deciding to put their hand in the till.

Internal fraud seems to be most common among employees slightly towards the younger end of the scale, between the ages of 25 to 44 — although most fraudsters in 2013-14 came from the 45-54 age group. Most happens in the largest entities, and more often right under the minister’s nose in departments than the more independent corporate entities. 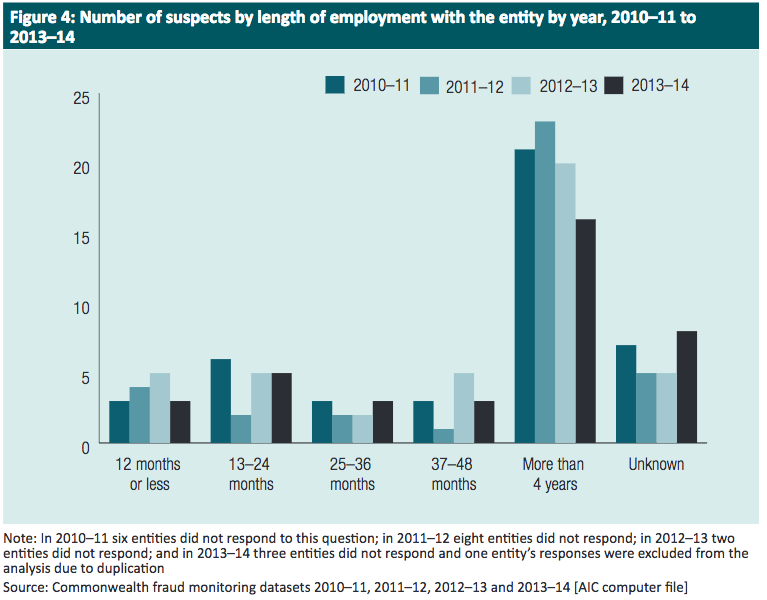 Eagle-eyed staff members are by far the most successful mechanism for detecting fraud, with internal audits a distant second and all other potential avenues — anonymous whistleblowers, external audits, police investigations or the suspects dobbing themselves in — turning up very little.

Survey data provided by departments allows the Australian Institute of Criminology to identify these and other common traits of internal fraudsters, and how they change over time. But a recurring theme in its latest fraud update is that more information could allow a much higher resolution picture to emerge, and better explain why the AIC analysis departs from other similar research in some areas.

The Commonwealth lost at least $12.7 million in 9,467 cases of fraud, reported by 181 agencies over the four years from 2010-11 to 2013-14. The annual cost rose by 20% over that period, although the frequency of reported incidents went down. The use of fraudulent documents was the most common method, but it was overtaken by misuse of ICT systems in 2013-14.

The AIC’s latest brief report focuses on data from 165 agencies that filled out survey questions with details of their single most expensive internal rort over the four years.

Along with stealing money and rorting entitlements, misappropriation of equipment was also fairly common among the most costly frauds. Theft of information was rarely reported but, as the report points out, that is probably because it is harder to quantify in financial terms.

The collection, analysis and reporting of the survey data is supposed to provide insights that help federal agencies manage the risk of their own employees committing fraud. But the AIC report also says a lot about the limitations of the whole process that make it difficult or impossible to draw firm conclusions from the statistics.

About 20% of federal agencies don’t fill in the confidential annual questionnaire about fraud at all. When it comes to the “most costly incident” section, those that do are often unable to answer all the questions about the fraudster, such as their level of education, motivations and length of employment. The report covers some of the reasons why:

“On occasion, suspects may not have told an entity why they committed the offence and, if the suspect was simply dismissed from the organisation, details of the case’s outcome may not be known.

The collection of data relied upon respondents to the census — the entities’ delegates — knowing the full details of the alleged fraud and subsequent investigation. In some cases that may not have been the case — for example, where no suspect was identified.”

Questions are often left blank because “the relevant information had not been collected during the investigation or could not be retrieved for the purpose of answering the questions, possibly because the person completing the census was not involved in investigating the incident,” according to the authors, Russell G Smith and Penny Jorna.

In other cases, information was not provided because investigative and legal proceedings were ongoing or because agencies were awaiting the results of trials or appeals, but nonetheless it seems like the overall exercise could have significantly more value if the AIC had more information to work with.

Few agencies could provide information on the perpetrator’s primary motivation. Those that did often ticked “greed and desire for financial gain” or “family and personal problems” but the majority were unsure or chose not to answer. There are various difficulties in recording and verifying such information but if it could be done, it would be very useful over time.

“Understanding the motivations and rationalisations of fraudsters is of critical importance in designing effective fraud-control measures,” Smith and Jorna write in their concluding paragraphs.

Past research has found men commit fraud more often than women and the AIC report shows this held true for all years except 2012-13 in the APS. Some other research has found the number of women among suspects increasing, but again the lack of data made it difficult for the AIC to add much to the question of whether women are committing fraud more often, or just getting more opportunities to commit fraud through increasing equality in the workforce.

Information about the employment level of fraudsters also shows a lot of agencies answered “other” and “unknown”   although a fuzzy picture did emerge showing the most costly frauds are very unlikely to be committed by senior executives or entry-level staff. 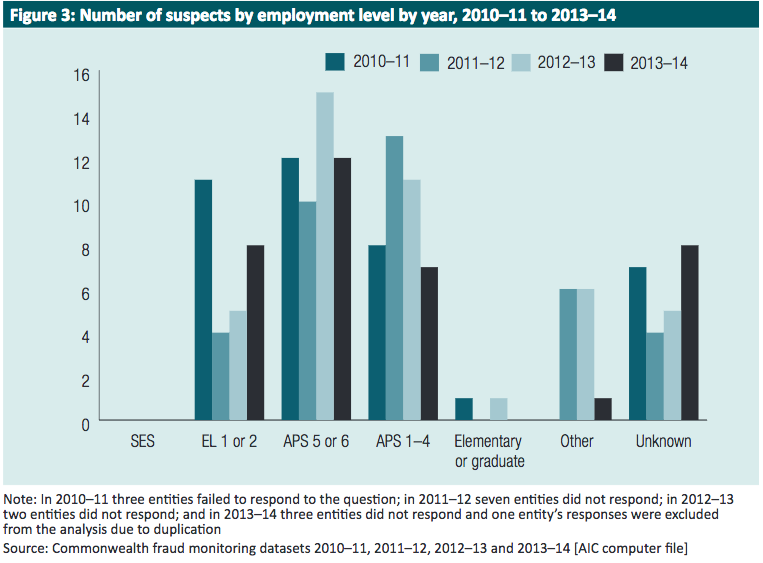 While it is a good thing that not one senior executive committed any of the most costly frauds reported in the four years, Smith and Jorna see a need for more research to find out why, because when senior executives commit fraud against their employers, it is generally the most damaging kind.

They would also like to do more research on any potential correlations between fraud and security clearance levels, noting that among those suspected of fraud, there were consistently a handful of people with the highest clearance.

One of their key goals is to hone in on any patterns of behaviour that could indicate a dodgy staff member:

“In addition, further research is needed to determine how suspects indicate they may be engaging in fraudulent activity — in other words, to identify red flags in employee behaviour. By understanding the behaviours that might indicate fraud or serious misconduct, entities can act quickly to reduce its impact.”