Tackling a highly complex problem like obesity requires strong leadership and political will. It’s the only way we’ll implement the full range of interventions (like a tax on sugary drinks and restrictions on marketing of unhealthy foods) that are recommended by experts internationally. Many of these interventions go against the powerful interests of the food industry, and it’ll take courage and co-ordination to get them across the line.

Unhealthy diets and obesity are leading contributors to poor health in Australia. Almost two out of three (63%) Australian adults and one in four (25%) Australian children are overweight or obese. The costs associated with overweight and obesity have been estimated at over $56 billion each year.

But there are plenty of actions that each government in Australia could take right now to address the problem — at very little cost — according to our landmark study that sets a roadmap for successful obesity prevention for each jurisdiction in Australia.

“At the moment, government policy in many of these areas relies on voluntary action by the food industry.”

The study, involving more than 100 nutrition and policy experts from 53 organisations nationally and supported by The Australian Prevention Partnership Centre, assessed the extent to which each jurisdiction in Australia is implementing globally recommended policies to improve population nutrition and create healthier food environments. The study also provided recommendations on what each jurisdiction needs to do to improve performance.

As in other areas of public health, this study found that Australia is leading the world in many aspects of obesity prevention.  But our work has shown there is large variation in the implementation of policies across federal, state and territory governments, and this is diminishing Australia’s efforts to address obesity.

For example, our study found that all states and territories have policies for restricting junk food in school canteens, but they differ in the way the policies are applied and the extent to which implementation is monitored and supported.

Policy efforts in this area need to focus on mechanisms to increase awareness and compliance with existing healthy food provision policies.

The study recommended that policies are also needed to reduce the extensive level of unhealthy food marketing — not just on prime-time TV, but also in sports venues, community centres and other settings where children gather. The nutrient composition of foods, the way nutrition information is provided to consumers, and the relative price of healthy and unhealthy foods are also key areas for policy action.

At the moment, government policy in many of these areas relies on voluntary action by the food industry. For example, while Australia is recognised as an international leader for developing the Health Star Rating system for food labels, its implementation is voluntary. This means that not all products display nutrition information in the same way, making product comparisons difficult for consumers. Mandatory implementation of the system would help consumers have the information they need to choose healthy options.

Current efforts to reduce marketing of unhealthy foods to children also rely heavily on industry self-regulation. But this has proved  inadequate. While national restrictions are recommended, states and territories can also take action in this area. For example, our study indicated that eliminating unhealthy food promotion in settings controlled or managed by governments (such as public transport, bus shelters, government-owned billboards, sporting facilities and events) should be a priority. 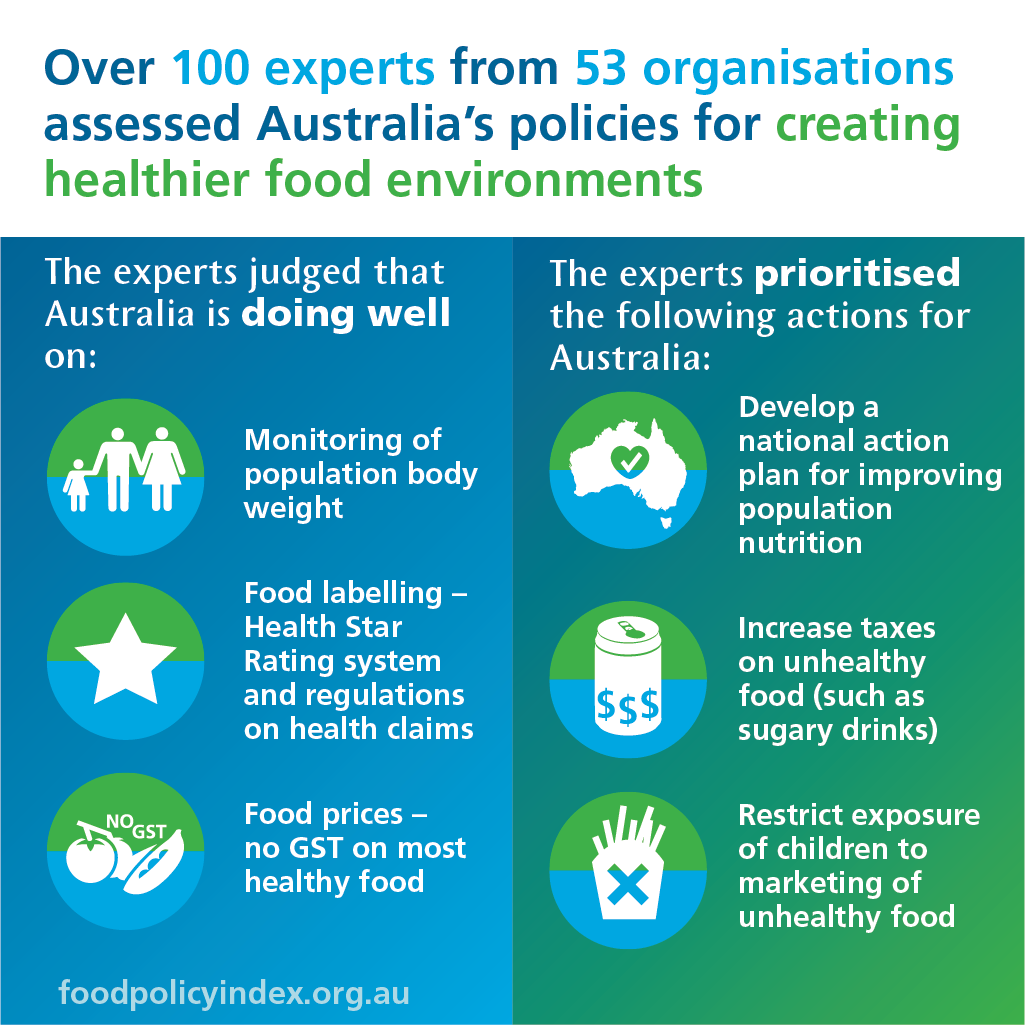 At a national level, the highest priority recommendations are the development of an overall national strategy and implementation plan for improving population nutrition, the imposition of taxes to increase the price of unhealthy foods (especially sugary drinks), and regulations to reduce exposure of children to marketing of unhealthy food.

At a state and territory level, we found policies that were recognised as amongst global best practice benchmarks. These include menu labelling regulations (several states and territories), support and training systems to help schools and organisations to provide healthy foods (VIC), independent statutory health promotion agencies (VIC/WA), and mechanisms to incorporate population health considerations into all policy development processes (SA).

Promising new areas of policy action at state and territory level are initiatives to:

Clearly there is considerable potential for these leading policy initiatives to be applied more broadly across jurisdictions.

Our study also recommended that improved monitoring of food environments (including the extent of food marketing and the types of foods available in government-managed settings) is needed to measure progress.

While there is no silver bullet to improving population diets, international evidence shows that a coordinated government-led approach is needed to create environments that make it easier for people to make healthy food choices. Our study offers a way forward to help health policy makers address this major public health crisis.

Dr Gary Sacks is a Senior Research Fellow at the World Health Organization (WHO) Collaborating Centre for Obesity Prevention at Deakin University.

The Australian Prevention Partnership Centre is finding out how we can build an effective, efficient and equitable system for the prevention of lifestyle-related chronic disease.  It is led by the Sax Institute and is funded by the NHMRC, the Australian Government Department of Health, the NSW Ministry of Health, ACT Health and the HCF Research Foundation.

Gary is presenting at the World Congress on Public Health today in Melbourne on the policy settings governments at all levels in Australia can take to tackle the obesity epidemic.

Cloud communications building resilience and agility in the public sector