At least three quarters of federal agencies have digital-by-default information management practices, but there’s still room for improvement according to a report card on progress towards the looming Digital Continuity 2020 policy deadline.

The National Archives of Australia delivered its first public report under the policy to Attorney-General George Brandis last August, but it wasn’t public until last Thursday. It shows the number of agencies reporting they “manage most records digitally” rose 44% between 2010 and 2015, and stood at 74% midway through last year.

The NAA was confident the numbers would continue moving quickly in the right direction, driven by the edict that records created digitally after 2015 can only be transferred to the Archives in digital formats. The cost of storing physical records dropped from $220 million in 2010 to $126 million in 2015.

Surveys conducted in 2015 and 2016 suggested a “strong improvement in digital transition” in the preceding year, according to the report. There was a steady increase in the number of Australian Public Service agencies that self-reported they were “performing well” against all of three aspects of digital maturity: optimising business outcomes, addressing risk, and managing business systems.

The eight-month-old report showed over a third of agencies were still in the “early stages” of digital transition. Almost 6% reported they were “optimising the benefits of fully digital information management” and 59% said they had “transformed some business processes” and managed most records in their digital forms.

Director-general David Fricker’s report suggests the effort is going fairly well but now is not the time to slacken the pace or become complacent.

“The continuing potential for loss of valuable government information is one of our greatest concerns,” he said in a statement last week. “We are working together with agencies to improve that and assist with their progress towards digital information continuity by 2020.”

The update report, itself a recommendation of the Belcher red tape review, informed Brandis there was “room for improvement, particularly in the areas of retention and migration of digital information, and in optimising the cost-benefits of managing information digitally” given 58% were not ready to transfer digital information to the Archives at that time.

Additionally, 39.4% of agencies admitted “business decisions [were] not being informed and influenced by digital information management costs and benefits” and 46.1% were “not adequately managing their digital information’s retention, migration or destruction” leading to risks like “loss of valuable government information” and missed opportunities for efficiency and productivity gains.

Overwhelmingly, agencies cite funding constraints as the main factor putting the brakes on progress, according to survey results that were also released last August. 53% were finding technical and infrastructure issues the biggest hurdle, 40% say their workforce’s capability is a big barrier and 31% pointed to organisational culture.

There are also 29% that are “waiting for a whole-of-gov or shared-service solution” and — perhaps worryingly for Fricker — it’s just not a high priority for 13% of federal agencies. 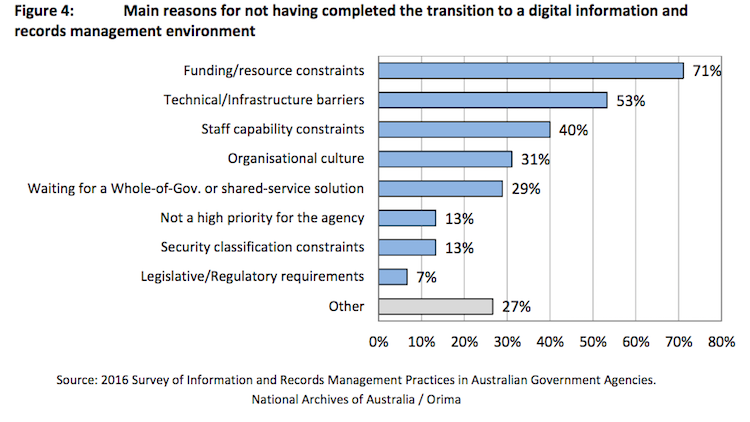 The report also suggested agencies should heed Peter Shergold’s warning about “the risks involved in poor information management” in his Learning from Failure report, and complacency in the face of the digital transition:

“Agencies need to take action over the next four years and beyond to ensure they achieve the highest levels of information maturity. It is the Archives’ responsibility to take all necessary steps to assist agencies in their progress towards information continuity by 2020.”

The NAA told Brandis the “need for information to be open, available and readily accessible to support accountability as well as engagement with Australian citizens” had been demonstrated in the report of a 2015 parliamentary inquiry into the value of “Smart ICT” in infrastructure planning and design, and the more recent process to develop an Open Government National Action Plan.

The best achievements of 2015 in terms of progress towards the APS digital records management deadline were “senior support of digital information management and digital system implementation” and the biggest capability improvement observed “was for the management of digital information in collaborative spaces and social media” — an indication of increased awareness that some social media posts need to be preserved:

“Social media is often hosted on third party platforms and without proper information governance, this valuable information can be lost.”

The August 2016 report is based on the 2015 Check-up Digital survey by ACIL Allen Consulting, a mandatory annual exercise for federal agencies, and Information and Records Management Practices in Australian Government Agencies by ORIMA Research, an opt-in survey run every three years.

In future, the Archives wants to replace both with a “single streamlined survey tool” and provide more advice on using digital authorisation processes that reduce the reliance on actual signatures on forms, along with its work supporting professional development and a more well-defined career path for information management and governance.

Appended to the report is a list of agencies in order of their digital maturity capability ratings, which possibly explains the long wait before its publication, in line with Belcher’s recommendation. At the top is the Attorney-General’s Department, just under the shipbuilder ASC, while some other major entities are quite far down towards the end including the Department of the Prime Minister and Cabinet as well as Finance, Health, Immigration and Border Protection, Parliamentary Services, and Industry, Innovation and Science.