The new Commonwealth (and ACT) Ombudsman is career public servant Michael Manthorpe, who moves directly over from the Department of Immigration and Border Protection, where he is a deputy secretary in charge of visa and citizenship services.

McGrath said his “impressive track record across a broad mix of roles within the public service” was the key reason he has been appointed to lead the office.

However, some would say the fact that Manthorpe is moving into the role directly from a very senior Australian Public Service post after almost 30 years working for the federal government actually makes the appointment rather unusual.

Independent blogger Stephen Murray has penned a well-researched history of appointments to the role since its establishment in 1977, in which he also opines that by selecting Manthorpe as ombudsman, the Turnbull government has “trashed” a forty-year tradition.

Murray points out this convention was strengthened in the past by senior public servants who were offered the role from time to time turning it down. The line of argument may well get some traction, politically, especially given the office’s special function overseeing immigration detention.

This will require Manthorpe to assess the “appropriateness of the arrangements” for every person detained by his former department for over two years, based on reports from secretary Michael Pezzullo. The ombudsman then reports his view on each long-term detainee’s circumstances, possibly with non-binding recommendations, to the Minister for Immigration and Border Protection, who then provides the public with an anonymised version via Parliament.

Since 2014, the ombudsman has published a yearly analysis of all of these reports and the most recent shows this part of the office’s workload has increased in recent years. 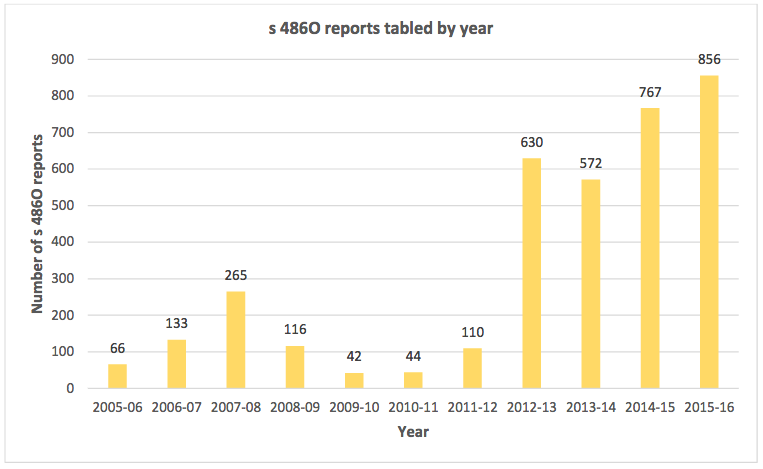 Senator McGrath thanked the staff of the office for keeping up the good work, and Richard Glenn and Doris Gibb for acting in the position, in the months since Colin Neave stepped down late last year to take up a job with ANZ bank.

The incoming ombudsman earned a Public Service Medal in 2010 for leading the government’s response to the 2008 collapse of ABC Learning childcare centres, as a senior executive in the education portfolio, when it was combined with employment and workplace relations. The citation records:

“In a pressured, emotive, complex and challenging environment he led the Child Care Industry Taskforce as it worked in partnership with the receivers and other stakeholders to develop innovative solutions that would provide stability for, and minimise the impact on, parents, children and employees.

“Throughout this process many unique and challenging public policy and commercial issues arose and it was Mr Manthorpe’s leadership and enormous personal commitment that delivered an outstanding result in terms of ongoing access to child care and a sound policy outcome.”

Manthorpe worked in that area of the APS for 25 years in a wide range of positions involving strategy, crisis management, corporate affairs, programs and policy. A native of the sunshine state, he studied journalism and history at the University of Queensland.

He joined DIBP as deputy secretary in July 2013, taking charge of the portfolio coordination and innovation group, which no longer exists. It “oversaw the department’s strategic planning, innovation and research and evaluation functions, as well as communication, parliamentary and ministerial support, accountability to external agencies and other cross-portfolio tasks” according to his bio on the DIBP website.

Correction: an earlier version of this article described the Public Service Medal as ‘won’. The Mandarin of course knows that all official awards and honours are not won, but earned and awarded.