Almost everyone who’s ever worked in customer service for a reasonable length of time shudders when they hear the old adage that the customer is always right; they know the customer is frequently wrong, often rude and sometimes completely unhinged.

And when it’s the government offering a service, a lot of customers naturally feel an inflated sense of entitlement. They pay your wages, they’ll write to the minister, the bureaucracy is out of control, and so on.

Large organisations can do a lot to support their frontline staff by being genuinely responsive to complaints, requests and queries from customers, and accountable for their policies and decisions. Most people recognise the people serving them don’t make the rules and are just doing their jobs. Service staff themselves obviously need to be polite, helpful and provide accurate information.

But even when all reasonable efforts have been made to provide decent customer service, one suspects foul, abusive language, threats and actual violence will always remain a risk for frontline workers. On this particular issue, the Tasmanian State Service and the state’s council of trade unions are on the same page and recently launched a joint awareness campaign aiming to reduce the risk.

A statement of principles clearly sets out the position Tasmanian agencies will take on the matter and the decorum they expect from members of the public. There are also standards of customer service, communication, openness and accountability expected of public servants, but the main message is blunt:

Emergency services in particular face a high risk of being attacked verbally or physically on the job. The Tasmanian Department of Health and Human Services, for example, has been running its own “Hands off our Ambos!” campaign in response to paramedics getting verbally abused, spat on, threatened and assaulted with alarming frequency.

Department of Premier and Cabinet secretary Greg Johannes told The Mandarin the campaign was not catalysed by any particular incident or any statistics showing a rise in violent, threatening or abusive behaviour from people interacting with government employees.

“For me it was the recognition that while we’re getting better at identifying and responding to the violence and aggression that affects some of the uniformed areas of the State Service — like starting to name up the issue as it impacts on our paramedics — there are a lot of other areas of our workforce that can also be affected,” Johannes said by email.

Park rangers, Service Tasmania shopfront staff and child protection workers are also sometimes on the receiving end of aggressive behaviour and the head of the State Service wants both them and the public to know it’s not on.

“So we sat down with representatives from our key unions, who have been strong advocates for action in this area, and quickly realised that this is something we can all agree on — violence and aggression against the people we employ and represent is never OK, and there must always be consequences,” Johannes added.

The consequences for abusive customers could be as simple as having details of the incident recorded, or agency staff could deny them service and call the police, depending on the type of service being sought, the circumstances that led to the aggression, where it happened and whether it is part of a pattern of behaviour. 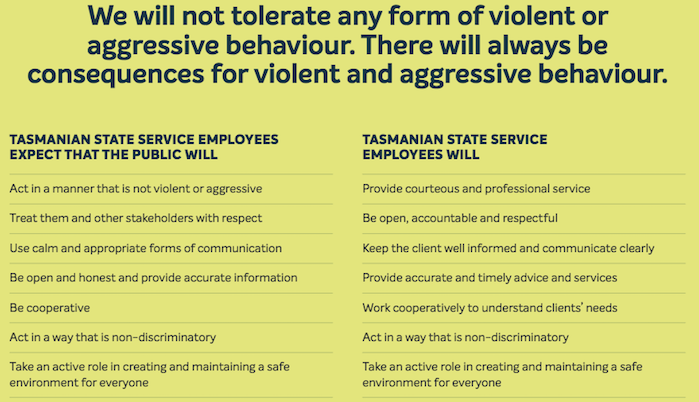 Johannes encouraged all public servants to report any incidents and said the campaign would be expanded over coming months with more communications material and information popping up around the island state.

The campaign covers offensive behaviour ranging from the rude — such as insults and even “condescending language” — to serious crimes against the person that should certainly be reported to police. The government pledges to:

The Tasmanian State Service also launched a new diversity and inclusion action plan last week, to bring its related policy to life over the period 2017-2020.

The strategy targets recruitment from both applicant and agency perspectives, support for existing employees, as well as collaboration between agencies and with external bodies from the community sector.

“And at the end of the day, embracing this framework is just the right thing to do – most of us in senior positions are aware of people who haven’t been able to reach their full potential, and areas where we have missed out on valuable perspectives, because our organisations weren’t able to embrace the full spectrum of diversity and make sure different perspectives were heard, valued and included around the table,” he adds.