Today the Council of Australian Governments’ leaders are meeting in Hobart, where they will discuss, among the hot topics of the day — like parole settings for would-be terrorists — how each jurisdiction is tracking on existing national agreements and other measures of concern.

Now, instead of reading a 65-page report, Australians can simply glance at the dashboard to see how their state or territory is tracking on commitments like the National Disability Agreement that aims to promote labour force participation, availability of formal assistance, and participation in social and community activities. 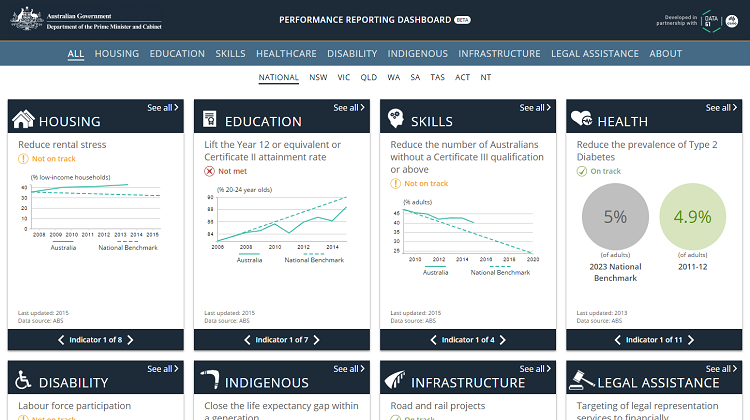 Each sub-commitment is tracked, by jurisdiction and nationally, using colour-coded markers for whether an agreement is achieved, on track, or setting a new benchmark. Similarly, where agreement has been made to monitor an issue, without a specific commitment on a target, the coded markers indicate whether there has been improvement or not.

The switch to the very Turnbull-esque approach also marks the hand-over of measuring and reporting COAG commitment progress from the Department of the Prime Minister and Cabinet to the Productivity Commission.

After the demise of federal Labor’s COAG Reform Council, the Abbott government moved performance reporting to PM&C as an interim step. The PC takes over responsibility from July 1, alongside its existing ROGS — Report on Government Services.

Existing agreements between the Commonwealth, states and territories cross an array of areas including healthcare, education, disability, water, transport, infrastructure and housing.

Similarly national level results may not necessarily reflect the Commonwealth government where responsibility is primarily held by state and territory governments.

Thank you Will, for hosting us here in Hobart for the 44th meeting of the Council of Australian Governments. And welcome to the COAG leaders’ table for the first time, Gladys Berejiklian and Mark McGowan. Gladys and I have been friends for a very long time, and Mark I look forward to building a strong relationship with you to deliver for the people of Western Australia.

Our agenda today is vital, perhaps more compelling than ever before.

We face today threats to our security from Islamist extremism with an intensity that is growing greater all the time.

This is a global threat, it is evolving rapidly and it will be a key focus of our discussion today.

I know that we will all be united in ensuring that we do everything to keep Australians safe and I look forward to our agreement that we will ensure that there is a strong presumption against the granting of parole and bail consistently across the country for persons who have shown support for or have had links to violent extremism or terrorism.

That’s important to keep Australians safe, to keep those threats, those people who threaten our way of life, threaten our safety, off the streets.

We will also be discussing energy security.

Now as we all know for a very long time this topic has been riven with uncertainty, with ideology, with politics, with partisanship. What we need is an energy policy, an energy strategy for the nation that is guided by economics and engineering, and is focused on delivering affordable energy, affordable electricity and gas, reliable and secure energy, and enables us to meet our emissions reduction commitments. Those are the three things we have to achieve. So we look forward to hearing from Dr Finkel with his report that COAG commissioned some time ago, and he is coming to speak to us today.

We’ll also be discussing education. Now the Commonwealth has proposed and set out in the budget, as you know, the real Gonski, actually endorsed by David Gonski, a man whose name is often taken up in political circles. But what we have proposed is a national approach to Commonwealth funding of schools which is rigorously needs-based so that schools in the same circumstances, students in the same circumstances, get the same level of funding wherever they may be around the country. So we look forward to progressing those discussions this morning.

As you know we’ve got important discussions on the National Disability Insurance Scheme and again, we’ve taken, at the federal level, the strong, tough decision to raise additional revenue by raising the Medicare levy by 0.5 per cent to fully fund our part of the National Disability Insurance Scheme. There are many other issues that we’ll discuss but the fundamental point I think is this: the security, the opportunity for Australians, is in our hands as the leaders of Australia’s governments. They look to us, Australians look to us, to be united in that objective, to secure their future, to secure their safety. To ensure they have the affordable, reliable energy that meets our emissions reduction commitments, that gives them the opportunity to build their businesses, to get a job, a better job, to get ahead.

So I look forward to very constructive discussion here in Hobart. Will, thank you for your hospitality and I have to say this is the most magnificent view I’ve seen from a COAG meeting.

The Law Council of Australia weighed into today’s parole settings discussion in the wake of this week’s terror attack in Melbourne, calling on COAG to give high priority to developing superior risk assessment tools for all violent offenders who may have a propensity for extremist views or terrorism activity, not just those convicted of terrorist offences.

LCA’s president Fiona McLeod SC said the inadequacy of risk assessment tools and the need for improvement was compelling.

“Courts and parole boards making decisions about bail and parole can make good decisions if they have sound information and effective tools permitting an accurate assessment of risk.  We need to improve the tools used to assess violent offenders,”  McLeod said.

“As we have unfortunately seen from recent experience, there is no neat line to be drawn between violent offenders and terrorists.”

McLeod said COAG should critically examine why there appears to be an absence of effective information sharing between intelligence agencies, law enforcement, and parole boards. The power to share information, at least between ASIO, AFP and state and territory police, already existed, but there remains a lack of clarity about how and when that should happen.

Departments: Department of the Prime Minister and Cabinet Productivity Commission