True to form, the 2017 UK election exit poll has brought shock to election night as the prospect of the Tories failing to secure a majority in parliament appears to be a real possibility. The poll puts the Conservatives on 314 seats – 12 short of a majority – and Labour on 266 seats.

After catching their breath, the first question most people are asking is whether we can trust these results.

The short answer is yes. While the official seat count may differ in either direction due to sampling error, exit polls have provided reliable estimates in past elections. In fact, they seemed to have fared much better than opinion polls in recent years for at least two important reasons.

Firstly, exit polling is done at selected polling stations within constituencies with sufficiently large samples to reduce uncertainty around the estimates. Exit polls include responses from tens of thousands of voters, while most national opinion polls have sample sizes of around 1,200.

Secondly, the exit polls only include responses from actual voters. Opinion polls must rely on vote intentions and the likelihood that a particular respondent will actually cast their ballot on election day.

However, like most opinion polls, exit polls are not based on probability samples and are thus not entirely representative of the voting public. Instead, a sample of the more than 39,000 polling stations is selected to represent the total. This process of sampling introduces error, which is why the exit poll estimates may be different than the certified seat counts.

How well did the pollsters do?

The figure below provides a snapshot of election forecasts on June 7 2017. 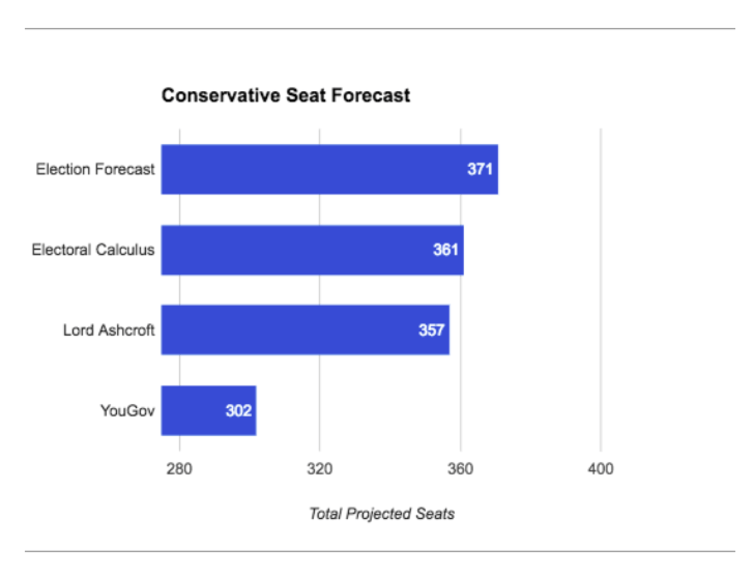 The mean projection based on the polls ahead of voting was 348 seats for the Conservative party, with a difference of 69 seats between the most optimistic prediction and the least optimistic one. If the exit poll is correct, then YouGov’s model predicting 302 Tory seats appears to have performed best among the major forecasters. That would suggest YouGov’s sophisticated multilevel regression and post-stratification method (“Mister P”) was effective. More importantly, it appears that YouGov used a better turnout model than other pollsters to weight the data (to correct for who would turn out to vote in this election).

In recent elections, pollsters have systematically underestimated vote share for the Conservative party by roughly 5%. This time around, they seem closer to the mark, and some may have even overestimated the party’s final vote share.

One final issue is worth noting. Even experts find it extremely difficult to predict election outcomes. A few weeks ago (May 16 to the 26), 335 election experts provided their projections in the first Political Studies Association expert survey. Although these predictions were taken several weeks ago and didn’t allow for recent changes in the campaign, the experts predicted a Conservative seat count of 371. Regardless of the final count, one thing seems clear: a Conservative seat count of 371 will probably be some way off.