As both territories follow the states and move to establish some form of integrity commission to investigate public sector corruption, a concerted lobbying campaign led by a section of the legal fraternity is keeping up pressure on the federal government to follow suit.

Among its supporters is Tony Fitzgerald, the former justice of the New South Wales and Queensland Supreme Courts whose name is synonymous with his work in the 1980s uncovering extremely widespread corruption that infected the Queensland public sector.

Fitzgerald has buddied up with The Australia Institute to campaign for the integrity upgrade and recently exposed how few federal members of parliament care about engaging on the issue. The eminent jurist came up with a set of seven basic integrity principles in April and the progressive think tank surveyed parliamentarians to see how many agreed with them, but the results were not encouraging: only 53 agreed, 36 refused to be involved in the survey and 137 did not reply at all.

“The refusal of a majority of politicians to commit publicly to normal standards of behaviour puts the need for an effective anti-corruption commission beyond doubt,” said Fitzgerald. “The major parties surely realise that the public wants politicians to behave honourably and that the scandals which are causing Australians to lose faith in democracy involve their members.”

On the other hand, a more recent survey published by TAI last Friday found 80% of Australians support a national integrity commission and 78% support one that holds public hearings. 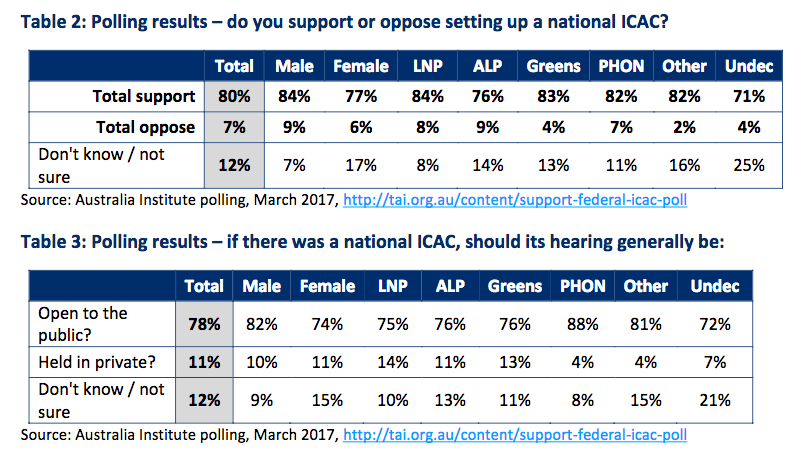 Fitzgerald has also recently appeared on the University of Melbourne’s policy shop podcast, and again the main argument is that federal politicians, not public servants so much, should face a similar level of scrutiny to their state counterparts. Judges and courts have some power, but at the end of the day parliamentary supremacy needs to be kept in check.

“Unjust laws are valid,” Fitzgerald reminds host Glyn Davis. “With minor exceptions, courts can only protect individuals or minority rights when permitted to do so by parliament, which can effectively oblige the judiciary to be complicit in injustice.”

Fitzgerald also weighs in on the main point of debate when it comes to anti-corruption commissions and their extraordinary coercive powers, which are supposed to be deployed in an investigative capacity — sometimes through public hearings — but leave matters of criminal guilt or innocence up to the regular courts.

“I’m strongly of the view that the New South Wales practice of declaring conduct corrupt is misplaced,” said Fitzgerald.

“In my view that is a role for the courts, for juries in serious criminal matters, to determine. The importance of the corruption commissions is that they have a much greater capacity to expose misconduct and inform the public, leaving it then to the ordinary resources to carry out the prosecutions.”

On the other hand, he also has no time for the argument that all public hearings on corruption matters are unfair to people who face questioning because it can harm their reputations.

“The idea that there is a problem with having these hearings in public because they embarrass people is nonsense.

“The public is entitled to know what is being done by their representatives, whether they’re public servants or politicians, especially when public money is involved. The courts investigate people’s behaviour constantly and they do it openly. The public has a right to know what is happening in public life.”

Federal ICAC support was strong among delegates and the hosts at the first National Integrity conference earlier this year, where legal scholars launched a research paper proposing that any national integrity commission would need a short leash. One of the clearest calls for the Commonwealth to establish such a body came from TAI’s executive director Richard Dennis, and the progressive think tank has continued to lobby for a federal ICAC in the months since.

The case for a federal ICAC is the question at TAI’s upcoming Accountability and the Law conference in Canberra on August 17, which will no doubt keep the issue in the media and keep the pressure up on federal MPs to get on board or justify their opposition.

Territories are catching up, leaving the Commonwealth increasingly isolated

The Northern Territory Department of the Attorney-General and Justice has just wrapped up a series of public consultation sessions around draft legislation that would establish an Independent Commission Against Corruption, broadly modelled on the South Australian arrangements, and the deadline for written submissions is this Wednesday.

The department has produced a fact sheet explaining the implications for public sector bodies and another explaining what the proposal means for local councils, along with the usual explanatory memo and other supporting documents.

The bill follows an inquiry by the highly experienced former judge Brian Martin — who recommended the territory should essentially copy the SA model and get the SA commissioner Bruce Lander to run the NT commission on a part-time basis to start with — and the NT Attorney-General’s department has also produced a document clearly setting out how the draft legislation compares with Martin’s recommendations.

Meanwhile, in the ACT, a similar committee of Legislative Assembly members is considering what would be “the most effective and efficient model” for a local independent integrity commission. It has received 31 submissions and held its first hearing last Thursday.

The ACT Assembly on Demand system carries an audio recording of the meeting, which was run in an unusually conversational style rather than the typical interrogation format. In attendance were the public sector standards commissioner Bronwen Overton-Clarke, auditor-general Maxine Cooper and ombudsman Michael Manthorpe as well as the director of public prosecutions, the clerk of the Legislative Assembly and its integrity and ethics advisor.

An issues paper that was released in March by the ACT committee helpfully goes through the various questions of institutional design that apply to an integrity commission for any jurisdiction.

Last week’s move to establish a Department of Home Affairs has also kept the federal ICAC campaign in the news, with prominent academic John Blaxland arguing it would be a better way to oversee law enforcement and national security agencies in light of the accompanying decision to shift ministerial oversight of the narrowly focused Australian Commission for Law Enforcement Integrity from  the Minister for Justice to the Attorney-General.

Blaxland has criticised the machinery-of-government change as more about politics than administrative reform and is quoted supporting a federal ICAC in an article by investigative journalists Richard Baker and Nick McKenzie, which points out the ACLEI uses the Australian Federal Police for a lot of its leg-work and the AFP will come under the new Home Affairs umbrella with the other agencies it investigates on behalf of ACLEI.

A Senate inquiry that was resurrected after last year’s double dissolution has given federal ICAC supporters and detractors another chance to make their arguments. The new select committee has received 36 written submissions — five more than its predecessor did the first time around — and held five public hearings in addition to the two that were held by last year’s inquiry. A report is due by August 15.

It is mostly politicians and public service leaders who argue there is no need for a federal ICAC and statements from a whole host of federal agencies are easily deployed to back up this perspective. However one academic expert, Adam Graycar, does not favour a federal ICAC with sharp teeth but argues for a new federal integrity council that plays a co-ordinating role instead.