I’ve known Dennis Glover since we were both staffers in Parliament during the Hawke-Keating years (I was there in 1981, 83-4 and 1991-3 until just after the ‘sweetest victory of all’ in 1993 which with hindsight I wish John Hewson had won as it would have kept in-tact Australia’s bipartisan tolerance on race matters for many years.)

Anyway, I’m a big fan of Dennis who has built a business and a life for himself living by his wits in the market rather than at the behest of an employer. He’s a freelance crafter of words, for politicians and others and an author of articles for newspapers and magazines as well as books on various subjects. I disagree with some of his analysis of the impact of ‘economic rationalism’ (I think a lot of the changes were largely inevitable and would have been arrested only slightly by slower policy change) but I agree with his sentiments, which is that policy makers paid little regard to the interests and even less the views of the working class, the less well educated and those in the outer suburbs like Doveton where Dennis’s family lived alongside the now long gone GMH and International Harvester factories.

Anyway, keeping in touch with him, I’ve grown increasingly excited about this book he was writing about Orwell’s writing of 1984 – which is a dramatic story. Wilde famously said that he was fighting a duel to the death with his wallpaper, but Orwell was fighting a duel to the death with his tuberculosis whilst desperately trying to finish 1984. Anyway, writing about this has been Dennis’s new project for a while. And he spent some time doing specific research for it (though his knowledge of Orwell was already very wide) and then, as he wrote it up, decided it didn’t have the life he wanted for it. 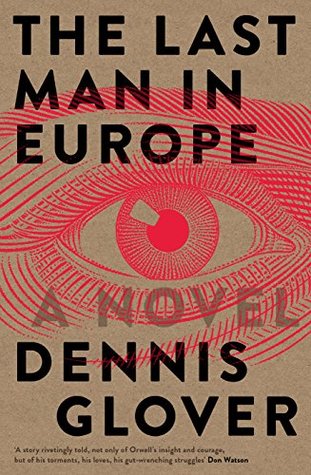 So he started rewriting it as a novel! That’s not something I can imagine myself having a hope of doing. I wondered at his versatility and guts in just making the switch like that, and wondered also if he was up to it. Seems such a difficult thing to do. But I was still excited about it. Then when I spoke to him about making the switch it turns out that he’s written novels before – though none have been published – I don’t know if he submitted them to publishers.

Anyway, as he told me the story, Eileen, Orwell’s wife left him letters on her deathbed saying that he had to stop living the ‘literary life’ around London and make sure he wrote THAT BOOK. So that’s the emotional premise of the book, which certainly strikes a chord between two middle-aged white guys at an Albert Park coffee shop.

I’ve just finished reading it. And it’s marvellous. One thing that struck me is how thin it is! I was expecting something quite a lot longer given Dennis’s encyclopedic knowledge of his subject and how much material Orwell and others have produced to enable one to write about it. And yet he’s paired it back so ruthlessly that what remains is an extremely tight novel. Not a word is wasted. It’s series of vignettes setting up the history that Orwell brought to his grand quest, full of ‘clues’ about the origins of so many of the details of 1984 in the ideas of the time, Orwell’s experiences and the fabric of his life.

As the book moves towards its conclusion we come to understand that the endless, merciless torture by which 1984’s hero Winston is reduced to human rubble is forged from the dark, hallucinatory tunnel down through which Orwell himself travels as he undergoes treatment for tuberculosis, as he struggles towards his own victory, flawed though he immediately comes to believe it to be. And his own death. Bloodied and spent.

I couldn’t be more thrilled for Dennis, and as I’ve told him, with 1984 hitting the top of the charts on the accession to power of someone with more than a hint of the gangster mentality that took over many of the governments of Europe in the 1930s and 40s, he’s on his way to international literary stardom! It’s hard to believe there hasn’t been fierce fighting over the film rights already, not just because of the quality of the idea, and the quality of the novel, but also because all those vignettes in the first half give the novel a cinematic flavour from the get-go.

As Robert Manne puts it in his ‘shout’ for the book:

“I began The Last Man in Europe in a sceptical frame of mind. By the time I’d finished it, I regarded it as a quite astonishing achievement. This is a novel about George Orwell and 1984, written uncannily in the style Orwell would have used if he had decided to write a novel about his own life. The result is a fascinating, compelling and, in the end, a deeply moving work, a wonderfully accurate and entirely unsentimental tribute to the political writer who grasped with greatest penetration the meaning of the European catastrophes of the first half of the twentieth century. Glover’s Orwell is fully imagined and precisely understood. With The Last Man in Europe, a major new literary talent has been revealed.”