It has been challenging for researchers to assess the population impact of paid maternity leave schemes, as around the world most wealthy countries have had a system in place for decades. In 2011, the introduction of a near universal, 18 week paid parental leave scheme in Australia offered an opportunity for a natural social policy experiment looking at whether there were differences in mothers’ health before and after the scheme was introduced.

Drawing on two large-scale surveys of mothers in Australia, one conducted before the introduction of the paid parental leave scheme and one conducted after the scheme was introduced, it was possible to explore whether the physical and mental health of mothers was different with, or without, access to a universal paid parental leave scheme. And in particular, the data could also reveal whether the scheme reduced health inequalities.

The question of inequality in mothers’ health is particularly important because, before the introduction of near universal paid maternity leave, the entitlements women would receive depended on the voluntary contributions of their employers. What this meant in practice was that women with secure, professional jobs tended to receive benefits from their employers while women with casual or insecure employment often received none. Therefore, a key question is whether the paid parental leave scheme in Australia helped to address inequalities in mothers’ health.

Overall, the results show that paid parental leave made a significant difference to the health of mothers. Mothers who gave birth after the introduction of the paid parental leave scheme reported mental and physical health scores that were higher than mothers who had been surveyed before the scheme had been introduced. Improvements in physical health were likely due to mothers delaying placing babies in formal childcare, as formal childcare has been shown to increase the likelihood of illness. Meanwhile mental health may have improved due to reduced stress related to income and time pressures.

But did this overall benefit occur because it narrowed the health gap between privileged and vulnerable mothers?

Health benefits were experienced by all groups of mothers, though most strongly with mothers who had secure professional employment.

It is reasonable to think that the health benefits of universal paid maternity leave might be greatest for those more vulnerable mothers who, before the introduction of the new scheme, would have received no income while on leave for their baby. The surveys confirmed that mothers in casual employment who received paid parental leave did have higher physical and mental health scores that those who had not. Yet the more significant gains were in fact experienced by mothers in permanent employment or who were managers or professionals. These mothers were able to add the existing paid leave from their employer to the government leave payments, and experienced greater health benefits.

Near universal paid maternity leave clearly delivers health benefits to mothers, beyond the basic provision of unpaid maternity leave. Yet the paid parental leave scheme in Australia does less to address health inequalities than we might expect. Health benefits were experienced by all groups of mothers, though most strongly with mothers who had secure professional employment. 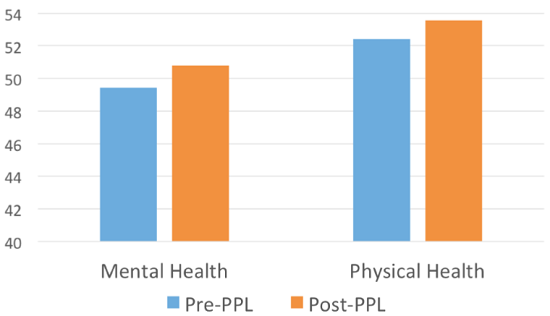 Health scores are marginal adjusted means. For full details of statistical analysis of the surveys see Hewitt, Strazdins and Martin (2017) “The benefits of paid maternity leave…” in Social Science and Medicine 182: 97-105

Who experienced the most mental health benefits from the paid parental leave (PPL) scheme (by mothers’ occupation)? 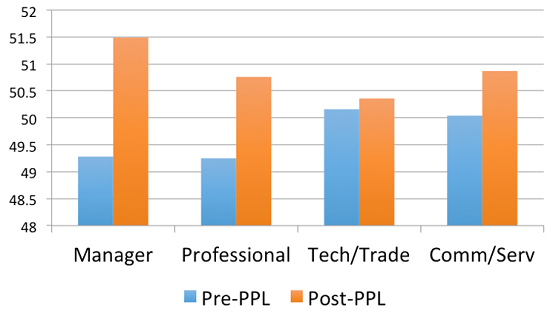 Graph does not include data from all occupation categories.

Who experienced the most physical health benefits from the paid parental leave (PPL) scheme (by mothers’ occupation)? 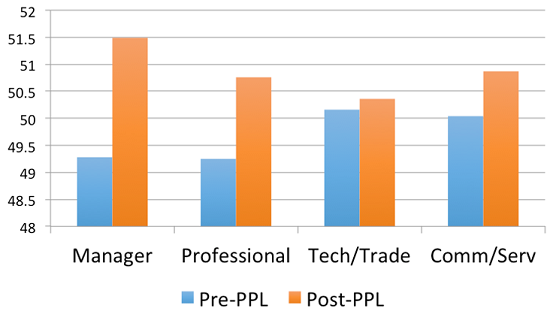 Graph does not include data from all occupation categories.

This article is based on the full study report: Hewitt, Strazdins and Martin (2017) “The benefits of paid maternity leave” in Social Science and Medicine 182:97-105