The Western Australian Service Priority Review has recommended a framework of performance targets for the whole government to chase in a wide-ranging interim report, published today, but other than that it leaves the detailed prescriptions to the final report in October.

The review panel, Iain Rennie, Margaret Seares and Michael Dillon, say WA can aspire to have “the best public sector in Australia” at a lower cost if it makes the most of an opportunity for “sustained, patient and thoughtful” reform.

“But to realise this, the sector must arrange its institutions well, design and deliver services to meet contemporary needs, and manage and develop its workforce with thought to the future,” they write.

“It must have absolute clarity about the Government’s priorities and it must foster and develop leadership at all levels to serve the public interest. The WA public sector has an opportunity now to capitalise on its strengths to achieve purposeful reform.

“There is widespread agreement across the sector about what needs to change and there is already good practice that can be more effectively harnessed. There is also vast experience in reform outside the State that can be drawn upon.”

The panel chaired by Rennie (pictured), New Zealand’s recent former public service commissioner, believes whole-of-government performance targets like those in NZ, Victoria and New South Wales would offer address “a lack of focus on priorities, consistent narrative and direction” they detected in their review.

“The Panel asks, how can the State make informed decisions about where its resources should be allocated and how its efforts are best directed without robust, readily available information about how it is performing in key policy areas?”

This is presented among four broad directions for reform:

These sections focus a lot on “factors causing sub-optimal performance” but the report says they build on “a strong foundation” that already exists:

“Public sector employees in general possess a strong spirit of public service, are ethical in practice and have a genuine desire to improve services for the benefit of the community. There are excellent examples of engagement, collaboration and innovation across the sector.”

WA is in “an extremely difficult financial situation” compared to other states and can’t afford “business as usual” with agencies working in isolated silos, the report argues, and it says delaying reform will only lead to higher costs down the track. Cross-government collaboration and service delivery consolidation is front and centre.

“The people of WA do not care which government department provides their services: they simply care about value for money, outcomes and the experience they have in dealing with government.”

Hundreds of stakeholders from the public sector, business and industry groups, regional service providers, Aboriginal representatives, unions and the community services sector were consulted for the review, according to Premier Mark McGowan. The panel has also toured three regional areas.

“The Service Priority Review is one of several measures being implemented to drive significant reform and cultural change across the public sector, in order to deliver better services for taxpayers,” McGowan said in a statement, describing the report as a “significant milestone” for his government.

“Western Australians deserve a public sector that delivers the best possible outcomes for the community.

“These measures will bring about substantial long-term change by improving the sector’s efficiency, effectiveness, accountability and affordability. We expect that, over time, our public sector reforms will save taxpayers hundreds of millions of dollars.

“I am encouraged by the high level of support and enthusiasm for the review, and acknowledge the contribution that the public sector, organisations and individuals have made to the interim report.” 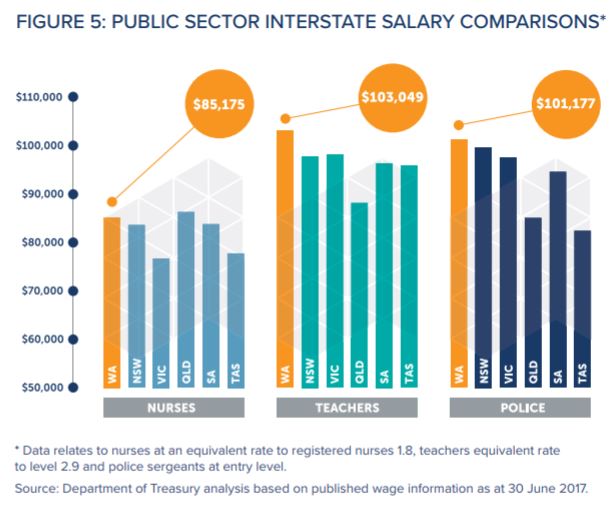 “Unprecedented demand during the resources boom led to recruitment of extra front-line staff to service population growth, and led to upwards pressure on public sector wage levels,” the report adds.

“Further to the fiscal situation, the Panel was surprised to find that there is little systematic information on WA’s public sector performance – and the outcomes the sector achieves for the community.

“While the paucity of information means that caution needs to be taken in making conclusions, there does not appear to be evidence that outcomes, across the board, are better in WA than in other Australian jurisdictions despite the higher cost of many service areas. To the contrary, Productivity Commission data indicates that some key public services in WA are less efficient and effective than other states.”

The interim report starts from a familiar list of challenges: “rising community expectations for responsive service delivery; clear expectations by ministers for high quality policy advice; high levels of volatility, uncertainty, complexity and ambiguity in the operating and political environments; accelerating social and technological change; and expectations in the contemporary workforce for greater flexibility, mobility and a forward looking culture in the workplace.”

“Much that is good about living and working in WA depends on the ability of the State’s public sector to meet these challenges,” the report argues. “Social health and wellbeing, economic vitality and environmental sustainability depend on a public sector delivering the best services possible to the community.”

Another list of more specific challenges is added later:

“Many of the challenges facing the WA public sector are not new” but previous opportunities for reform like the 2009 Econcomic Audit Committee review have not been followed through, the report notes.