In the rapidly shifting landscape of the global technology industry, it takes a special kind of commitment to excellence to grow and last a decade let alone three.

Accomplish that from Australia — over a sustained period of intensifying competition and developments that have redefined entire industries and how citizens engage with government — and you will have earned a place on the world-class stage.

We often hear about the need to develop and bolster Australia’s home-grown technology industry, especially when it comes to the systems and software used by our own government and industry.

So when companies like Objective Corporation, founded in 1987, chalk-up some big milestones in terms of staying power and growth it’s worth calling it out and asking how they got it right.

Staying power for the people

“It’s about a vision from a bedroom in Port Kembla of what’s possible, from the ground up.”

The NSW Innovation Minister also pointed to the economic necessity to diversify and flourish outside the commodities boom cycle.

“We need to find new ways so our prosperity continues into the future, to create new jobs and opportunities… into what is the technological economy,” Kean said. 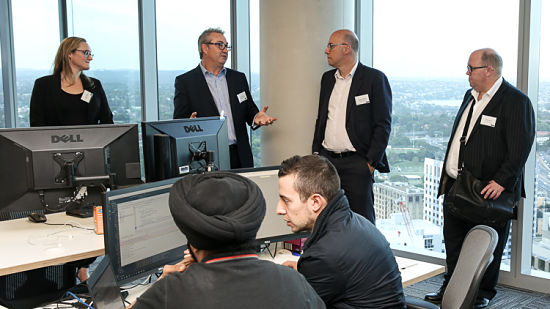 He cautioned that recent research indicators pointed to an increase in jobs being automated.

“I as the minister for innovation need to find ways to fill those gaps for that displaced workforce, that we skill the labour force that the new economy is presenting,” Kean said.

“It’s a great challenge for us as government, and businesses, but it’s also a great opportunity. Objective is positioning to take advantage of that [opportunity].”

Kean said the $100 million plus investment was not just a sunk cost but one that would utimately pay dividends to Australia as a nation.

The shift to substantially expanded and upgraded offices was necessitated by sustained growth, not just in Australia but in export markets including the UK, New Zealand and North America.

Over the decades the company has specialised in delivering systems and platforms that underpin mission critical operations of government and business in the information age with the highest levels of assurance.

It’s also done so over a sustained period when challengers big and small have entered and exited the market at different times, creating a vital information management and governance backbone across federal, state and local governments.

That commitment and consistency has delivered an intergenerational dividend of stability to the public sector that transcends any dollar value.

Having relentlessly innovated along the way, Objective now has around 100 software engineers and developers who continue to create excellence in user experience, process design, automation and integration.

Objective certainly hasn’t stood still either, with its current products and solutions enabling government to transform, automate, collaborate and deliver flexibly with strong governance to build and maintain public trust.

Delivering value back to the public sector and the economy

Objective’s Chief Executive Officer, Tony Walls, paid tribute to the strong support received from the public sector in the effort to make government better for citizens and those who work in it alike.

“It’s been quite a journey and clearly I didn’t do it on my own. We’ve had great customers and great staff,” Walls said.

“We don’t take customers for granted. We take pride in customers innovating.”

Walls also pointed to what domestic commitment means on the ground.

“As a company we don’t offshore. If you look around at tech companies, a massive amount of offshoring occurs. You lose customer intimacy. For me, you need to work together. We employ people in NSW, [and] across Australia.”

In the meantime, the pursuit of excellence continues, with Objective having invested $12.9 million in FY17 for research and development, a sum that takes the amount re-invested into local capability to $109 million over the last 10 years.

“As an Australian company and someone who wrote the cheques that’s important,” Walls said.

It’s a commitment certain to deliver benefits to both the public and private sectors for the foreseeable future.

Cloud communications building resilience and agility in the public sector