The NDIS is an important innovation for people with lifelong disability and for the Australian Public Service. Despite the potential gains of the scheme, there remain crucial risks which could impact its ability to achieve its aims.

Specifically these include risks around the development and sustainability of the NDIS market. For example, the market may be too inflexible or not responsive enough to offer the innovative and person-centred care it promised. As we have suggested previously in The Mandarin, there’s an acute risk of thin markets emerging, meaning less choice and control for some people with disability.

Our new research shows that government must take an active role in ensuring that the important policy goals of the NDIS are met through market stewardship, employing more than just light-touch measures.

We found that policy makers and bureaucrats involved in the implementation of the NDIS have a wide range of ideas about how much government should steer or steward the NDIS markets across Australia. The design of the NDIS has always attempted to straddle the political left and right – it promises the left emancipatory choice and control back to people with disability, while also promising that more work will be done by markets and less by government (in line with the preferences of more conservative political parties).

Our research found that ambiguity regarding what role government should take in managing markets appears to stem from concerns about undermining the original vision of the NDIS set out by the Productivity Commission its blueprint for implementation back in 2011.

The Productivity Commission argued that government should take on a stewardship role through addressing thin markets and providing ongoing block funding. However during implementation this has been diluted.

In our research, we drew the distinction between light-touch regulatory roles, such as protecting against fraud or unsafe providers, and stewardship roles which protect against inequality and thin markets. In the table below, we demonstrate the different risks managed by government(s) depending on whether they engage with a regulatory or stewardship approach. 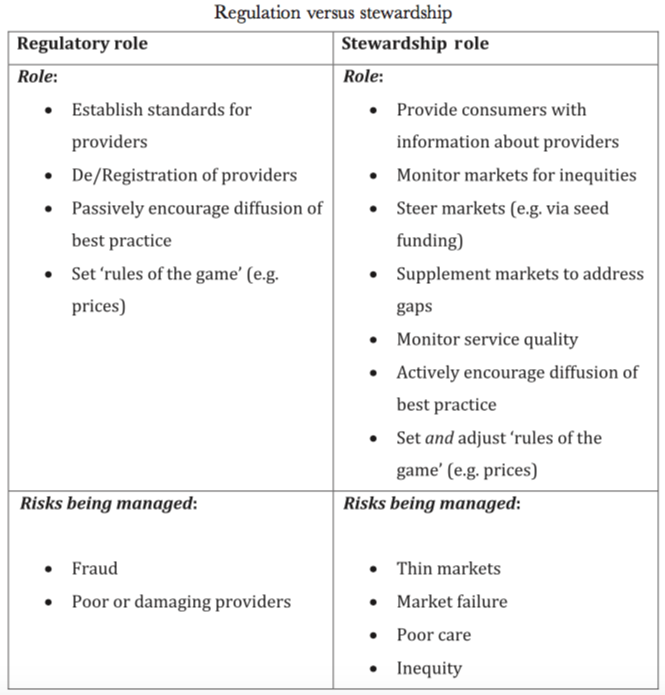 To avoid inequities in the NDIS and/or market failure, governments need to take on a stewardship approach in addition to a regulatory approach. This requires a more hands-on approach as well as greater information sharing between different government agencies.

The good news is that since this research was conducted, a new NDIS Quality and Safeguards Commission is being set up and is set to take on a market oversight role, in addition to quality assurance and safeguards. However, large information gaps continue to exist about how well the NDIS markets are performing in different locations, meaning that important information for making stewardship decisions is missing. The next stage of our research is set to tackle that information gap and provide insight into thin markets in select locations in Australia.

Associate Professor Gemma Carey is the Research Director of the Centre for Social Impact UNSW and an NHMRC Fellow. Eleanor Malbon is a Research Fellow within the UNSW Canberra Public Service Research Group.