Uber, Airtasker, Foodora, and Amazon Mechanical Turk are brokering a new workplace infrastructure where workers bid directly for work via apps. As much as the developments are heralded by some as cutting transaction costs and reducing barriers to entry into work, they are coming under increasing scrutiny over questions of worker rights and fair labour market regulation.

In our project on Digital Rights and Governance, we analysed how the Australian public felt about issues of online privacy, surveillance and free speech. We also asked Australians whether new regulations might become necessary for workers in the online gig economy.

Despite the recent Uber ruling by the Australian Fair Work Commission on employees versus contractors, it is important to note that our research found only 10% of Australians believe that the relationship between online platforms and gig workers does not require any new regulation or government oversight.

Instead, 61% thought new regulations are now necessary to address the challenges and inequities arising from online gig work. Opinion was split evenly between those who agreed that “these platforms should be fully regulated to give gig workers the same kind of rights that other employees have” and those who agreed that “new employment-related regulations should be created specifically for these platforms”. 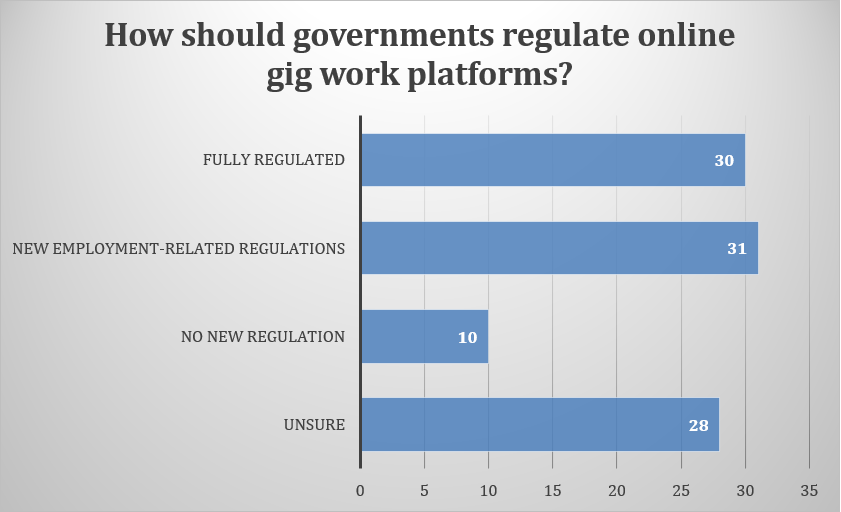 For example, Uber’s business model is based, not on building a company of employees, but on become a ‘partner’ with private drivers who work as independent contractors. However, Uber drivers pay their own insurance, maintenance and petrol costs, their right to drive can be terminated at any time by the company, rates changed without notice, and they are rarely covered by existing employment laws such as minimum wage, overtime, or anti-discrimination.

As pointed out by Joellen Riley labour laws developed over the last century do not apply to workers who are not recognised as contracted employees, and the legal manipulation of these commercial arrangements has seen a growing number of workers fall into a regulatory ‘black hole’. She suggests the solution ought to be new regulations to protect workers and take into account the specificity of gig work.

In the UK there have been attempts to force Uber to take more responsibility for the public safety records of its drivers, rather than regulating for the employment rights of Uber drivers.

A discussion, however, has begun between Airtasker and Unions NSW to ensure workers are not being paid below award or minimum wage for the tasks they complete. Yet this is self-regulation by the platform, not new labour market policies that take into account either fairness or the specificity of gig work, or monitor that gig workers’ conditions actually do improve.

Despite current debates on the emergence of online platforms for gig work, not that many Australians have used them as customers. Their use is significantly higher among younger Australians and those with a university education:

Our survey data shows that while most Australians recognise that platform driven gig work can be flexible for workers, letting them choose when to work and how much, very few agree that it provides a longer-term option for secure or well paid work.

However, those who most likely to be in these low-skilled jobs – younger people and those with a high school level education – were least likely to be positive about the emergence of the gig economy.

Ariadne Vromen is Professor of Political Sociology at the University of Sydney.

Ariadne Vromen is Professor of Political Sociology at the University of Sydney, Australia. Her research interests include: political participation, social movements, advocacy organisations, digital politics, and young people and politics. She has completed extensive research on young people's political engagement, including a comparative project on social media use in Australia, the UK and USA. She has also co-authored several texts on Australian politics, including Powerscape: Contemporary Australian Politics.