South Australia might be in the middle of a state election campaign, but the business of making a positive impact for the community hasn’t stopped. A coalition of more than 30 organisations including three SA government departments and the City of Adelaide have agreed on an implementation plan to tackle the city’s homelessness.

The implementation plan, signed today by politicians of all stripes, has an ambitious target: functional zero homelessness by 2020.

The key word here is ‘functional’:

“A community reaches Functional Zero when the average capacity of its housing system is greater than the existing need and this can be proven with data. Functional Zero will be reached in Adelaide when the number of people sleeping rough at any point in time, is no greater than the average housing placement rate for that same period (usually a month).

About 120 people are sleeping rough on any given night in Adelaide’s CBD.

How the plan was hatched

A movement, coordinated by the Don Dunstan Foundation, has been building in Adelaide to be the first city outside the United States to commit to implementing a program called Project Zero. The program has been implemented in 75 US communities, and of those, seven have achieved functional zero homelessness for veterans, and three communities for chronically homeless people.

Some might look at that as rather poor odds of success, but the program is still young.

It took Bergen County in New Jersey a decade to be credited and certified by the US Department of Housing and Urban Development and Community Solutions with being the first county in the US to measurably and sustainably end chronic homelessness. 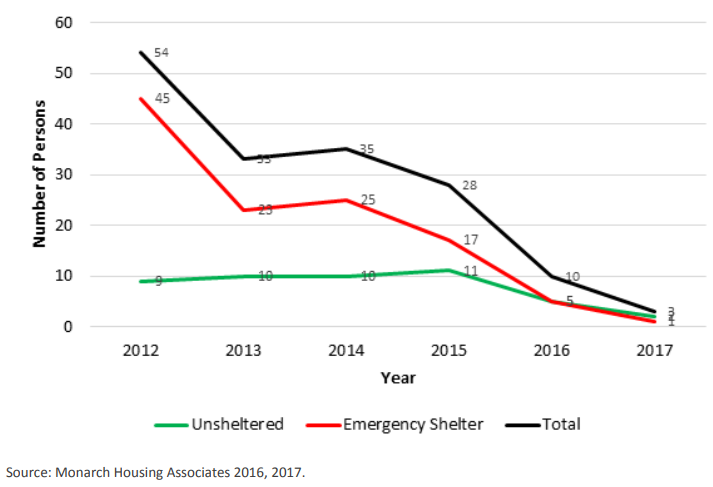 Those records start at 2012, but the factors contributing to its success started as far back to 2007 — with a Housing First Approach where people who were declined access to shelter because of behavioural, mental drug or alcohol issues were prioritised for shelter and housing.

Other factors attributed to Bergen County’s success include identifying ways to create real-time data and a coordinated assessment criteria so those most in need get accommodation while other options are found for those less in need.

The city built a one-stop shop (command centre) for services, replacing sub-standard shelters, and co-locating multiple housing and service providers in the same building, as well as accommodating the people needing assistance. Every plays by the same set of rules: “groups committed to assess people using the same coordinated assessment tool and prioritise resources according to a shared set of criteria.”

The public housing authority was also an participant, allocating 20% of housing vouchers to homeless people when they became available.

In traditional South Australian style, those seeking to replicate Bergen County’s success turned to a rapid design process (aka a 90-day project) to come up with a plan that could work in local conditions.

Adelaide Zero’s implementation plan is particularly NGO-driven, by with buy-in from government. It isn’t focussed on crisis accommodation.

“We will also be doing more work so that we can better respond to the needs of homelessness among Aboriginal people in Adelaide’s CBD,” Pearson said.

“We live in the fifth most liveable city in the world, and it is simply unacceptable that too many of our fellow citizens have nowhere to live – the Zero Project is our collective response to say ‘no more’.”